a Young and Herbert Marshall. Fred plays ‘the Rhythm Romeo’ who’s happier playing a harmonica.Loretta Young plays his former girlfriend who is now engaged to Herbert Marshall.
Main interest in the 30 minute radio show is hearing Fred sing live before a studio audience and singing some songs not from his films or records.
He does “This Can’t Be love” (by Rodgers & Hart) and “ Only When you’re In My Arms“( by Kalmar & Ruby) – it just happens the latter song is in the Astaire/Rogers musical,The Story of Vernon and Irene Castle that year.
The Astaire voice does sound different,just as good, but singing in a radio studio produces a slightly different and more live sound than the pre-recorded songs in his films. 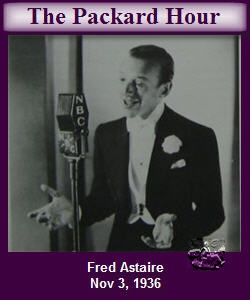 In 1936, Astaire started hosting a weekly radio show called The Packard Hour. (Fred had wondered if appearing on radio was a good idea for him – he said,”How does one dance on radio?”
The show was a mixture of music,comedy and sketches and featured the Johnny Green Orchestra.
It was interesting to hear Fred sing “Shine On Your Shoes” which would later become a full production number in The Band Wagon. And he sings a new Kalmar & Ruby number,”You’re Getting Away With Murder”.
He does some dancing in a sketch about auditioning for a chorus job – he sings and taps to “Pick Yourself Up”.
You also hear some of his foot work when he sings “The Continental”.

It was also interesting in this particular program that it was broadcast during the 1936 Presidential election. Every so often – even in the middle of one of Fred’s songs! – the announcer would tell us the latest election result ‘flashed from New York’ ………  “Roosevelt leading in New York State 2 to 1.”

Fred also sings a song called “I’m just a candidate for you”.

In 1968, Fred gave a long interview from his home in Beverley Hills. He talked about his TV specials.

“The TV specials belong to me. I had complete control. …….I had Herbert Ross on the ensemble numbers, a very clever man. And Neil Hefti, excellent musical director………I have all the best kind of help. But if I don’t like it,that’s the end of it.”

“On the staging of ‘Limehouse Blues’, Herbert Ross and I discussed ideas – a China Town ‘Bonnie and Clyde’!

On his film musicals, he said, “I’d say to Hermes (Pan), I cant get the thing started  –  give me some opening steps. From there,we’d both sail. I always participate in the choreography. ……I don’t choreograph every step, I do my own solos.”

“One of my first inspirations was Mr and Mrs Vernon Castle. My sister and I were influenced by them.” 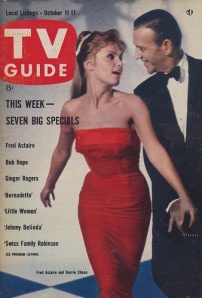 “I love Audrey Hepburn. I enjoyed working with her in Funny Face.”

“I’ve been asked to direct a number of times. I don’t think I have the patience to be a director….I can produce and edit.”

“I don’t go to many shows or see much television. I have interests in sports – race horses,golf. I seldom go to a theatre in New York. People do recognise you and it’s a compliment but it stops you from doing a lot of things.”

(This 1968 interview is at  oneactplaysandmonologues.com