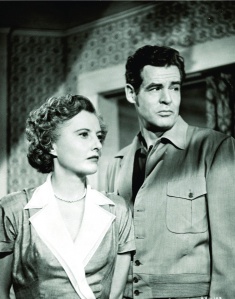 Before Robert Ryan made the film,CLASH BY NIGHT,he had created on stage the role of Joe which Keith Andes played in the film.

Ryan plays a film  projectionist in Clash By Night. Makes me think of some of his other screen occupations. Care to name any of the films in which he played – an outlaw,a sheriff, a gangster, a handyman, a boxer , a teacher.
Another of Robert Ryan’s films,THE NAKED SPUR, was described by Variety as having…”a plotline probably too raw and brutal for some theatregoers.”………….

ROMANTIC COMEDY IN HOLLYWOOD: FROM LUBITSCH TO STURGES

There are chapters on Jean Arthur,Carole Lombard,Irene Dunne and many others, and of course the influence of the great directors.

You know the author is a fan when he says,”Stage Door is like going to wisecrack heaven.”

Of Jean Arthur, he says, “She is the virtuoso of the delayed reaction – that wonderful ‘Hey!’ when she discovers the double headed coin Cary Grant gives her at the end of only Only Angels Have Wings.”

Or his description of Rosalind Russell in His Girl Friday, “Russell is like Groucho and Margaret Dumont,zany and dowager – alternating in the same person – composed and discomposed;towering and collapsing and then towering again.”

Or Lauren Bacall in To Have And Have Not: “She’s perfectly untouched by any form of snobbery or self importance.”

Mr Harvey lets slip his personal preferences when he says, “Irene Dunne is probably the greatest,the loveliest and funniest and most skilled,the most complex and the most affecting.” (of the great woman stars). The book ends with an interview the author had with Irene Dunne in 1978.

The book is scholarly but not dry and displays an unbelievable amount of research. You can dip into it and read a few chapters at a time………

Still waiting for Odeon to release  The White Tower (or The Black And White Tower as my friend Stephen calls it) in color – or for the BBC to screen their color copy again……..

Love this poster for the first of three film versions of The Desert Song. Would be great to see it (including a pre- Thin Man Myrna Loy as a desert siren,Azuri!)
The first remake was in 1943 and starred Dennis Morgan and Irene Manning,with the plot updated for wartime audiences.
And then in 1953, Warners gave it a new outing with Gordon MacRae and Kathryn Grayson.
Interesting that in the two remakes the leading character of the Red Shadow became El Khobar.
Was it really true that the communist menace made them stop using the Red Shadow name.
Would love a box set of all three versions……..

The following comment is more for other bloggers – have you ever checked what your most popular post was? Is it the one you are most proud of , or is it a surprise,as I found that the most viewed post I’ve written is MAE WEST,TIRA AND BEULAH (from 22 January 2013).

The scene I described in this post does contain one of the most iconic lines of Classic Hollywood dialogue ever written – by the lady herself – “Beulah,peel me a grape.” I’m glad Miss West is still so popular………

THE BRAVADOS (1958) stars Gregory Peck,therefore it’s an A feature and has to be a certain length – in this case 98 minutes.
20 or 25 minutes shorter and this western could have been a taut,lean character study of a man consumed by a passion for revenge (cf Ride Lonesome,made a year later )
The Bravados is the story of rancher Jim Douglass (Peck) whose wife has been murdered. His only aim is to find those responsible and kill them.Driven and desperate, he quickly accepts what his neighbour Butler (Gene Evans) tells him. Butler’s cabin is a few miles from Jim’s ranch,and he tells Jim he saw 4 men riding from the direction of Jim’s ranch,just after the murder. Two white men,a half-breed and a Mexican Indian. These are the targets.
Relentless and merciless, Douglass catches up with each of them and shows them a picture of his wife that he has in his pocket watch. They all deny any knowledge of his wife but he shoots Lee Van Cleef and Stephen Boyd and hangs Albert Salmi.

As Douglass  says later, “I set myself up as the judge,the jury and the executioner.”
Only when he catches up with Henry Silva, does he find the evidence that he was wrong, they didn’t do it.
When the truth hits him,the anguish is written on his face. The fact that the 4 men were due to hang for robbery and murder doesn’t help.
I’d trim all the scenes with Joan Collins who plays a former love of Douglass. Her character is called Josepha and she wears a black mantilla, but Mexican she is not!
There are also religious overtones and a very large church in a very small town. Plus a tot who plays Douglass’s daughter.

It could have been up there with some of the great Mann or Boetticher westerns.