THE MAN IN THE ROAD was Ella Raines’ last film,made in England in 1956. Sadly, it’s not a great ending to her film career. She doesn’t appear till 30 minutes into the film and really hasn’t much to do.

This is a Cold War thriller with Derek Farr as a scientist whom Russian spy Donald Wolfit wants to get to Moscow.

Farr is involved in a car accident and wakes up in a nursing home run by Wolfit. Farr has lost his memory and Wolfit tells him that he is half Russian and than his mother is in Moscow! 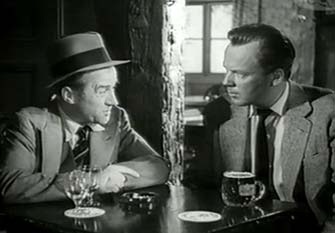 Cyril Cusack plays a doctor at the home who raises Farr’s suspicions. Farr escapes and lands up at the country cottage of writer Ella Raines who agrees to help him.

I didn’t know Ella had made a TV viewers series JANET DEAN,REGISTERED NURSE in 1954. Produced by Joan Harrison, the series had 34 episodes and was filmed in New York.

Ella’s third film when she was only 24 was probably her best -PHANTOM LADY.