“I’m ‘in’ Hollywood, but not ‘of’ Hollywood because I’m negro.

I’d like to do a good serious role in a mixed-race movie instead of being confined to cafe singer parts .”

Lena Horne, circa 1948 ( from ‘Hollywood on Hollywood’ by Doug McClelland.)

Lena Horne (1917 – 2010) was born on the same day and year and in the same part of New York – Brooklyn – as Susan Hayward. But how different their careers were.

Lena finally left Hollywood behind in the 1950s and said,

“I never considered myself a movie star. I just sang songs in other people’s movies.”

“You have to be taught to be second class; you’re not born that way.”

During World War II , Lena ,while entertaining the troops, refused to perform before segregated audiences.

With the Tuskegee airmen in 1945. (They were the first African-American aviators in the U.S.Armed Forces.)

She was great friends with Ava Gardner and the fact that Lena would have been perfect as Julie in the MGM remake of SHOW BOAT didn’t dent their friendship. Even though she would be dubbed, Ava listened to Show Boat recordings of her friend to help her in the role.

Lena had done a song from Show  Boat in the Jerome Kern biopic,TILL THE CLOUDS ROLL BY. (‘Can’t help lovin’ that man’ ). She seemed ideal for the role of Julie.

When Kern and Hammerstein were reviving Show Boat on Broadway in 1946, they wanted Lena to play Julie, but MGM wouldn’t let her out of her contract.

Although she had a seven year contract with MGM in the 1940s, the color bar meant that her musical numbers could be cut if necessary in the South where ,often,films showing colored people  in anything but subservient roles wouldn’t be shown.

Listening to Lena sing ‘Just One of those things’ in PANAMA HATTIE demonstrates just how good a singer she was and how dramatically she would put over a song.

MGM loaned Lena to Fox in 1943 for STORMY WEATHER. The title song became an enormous hit for her. But she only has star billing because this was an all black film.

CABIN IN THE SKY (1943) had been a big Broadway hit and Lena appeared in the film version as the temptress,Georgia Brown.

One of the stars was Dooley Wilson (of Casablanca fame), but Eddie Anderson was considered  a better bet for the film version.

(Unforgettable  in this film is Ethel Waters’s singing of “Taking a chance on love”. What a voice.) 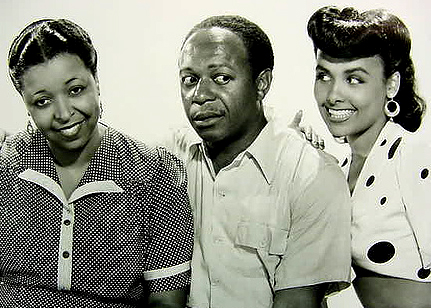 With Ethel Waters and Eddie Anderson.CABIN IN THE SKY 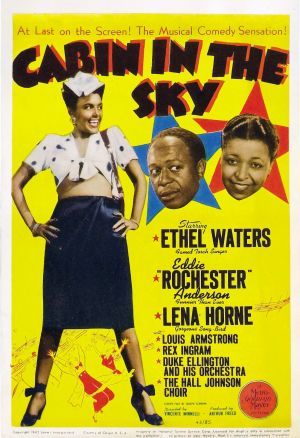 For WORDS AND MUSIC in 1948, Lena again did a couple of songs . But what songs. By two of the greatest songwriters ,Rodgers & Hart, she had ‘The Lady is a Tramp’ and ‘Where or When’. As usual, she performed them beautifully. 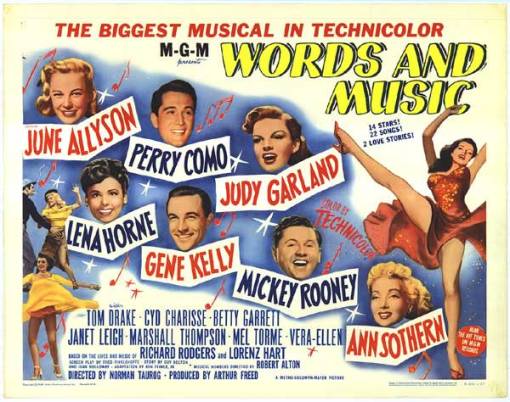 Lena left films in the mid 50s and started on this most productive part of her career. She was very successful in cabaret ,night clubs, and  on television. As late as 1982 she had a year long run on Broadway in her one woman show,’Lena Horne:The Lady and Her Music’. ( It can be found on You Tube.)

And she made many recordings and made the cover of  Motion Picture.

And appeared on Broadway in the musical,JAMAICA, with Ricardo Montalban. 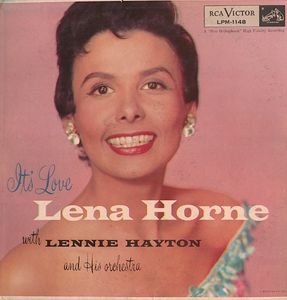 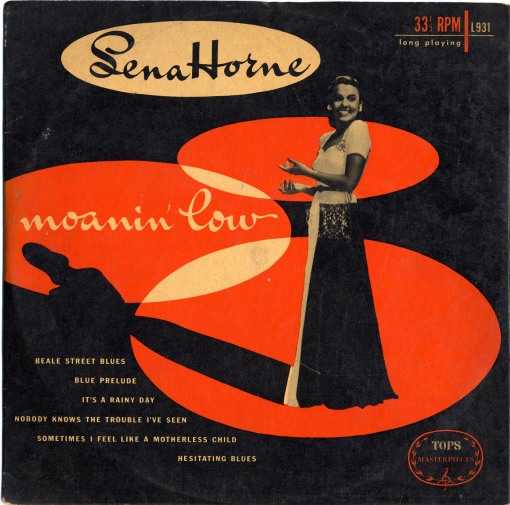 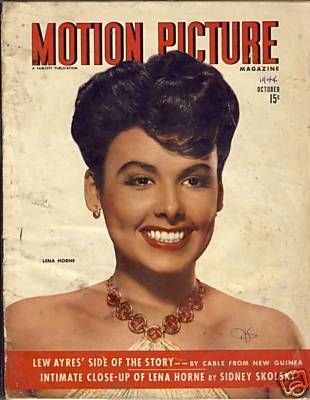 In the 1949 MGM 25th anniversary party,Lena was seated next to Katharine Hepburn in the alphabetical seating arrangements. (Tracy,Sinatra and Pidgeon in row behind). 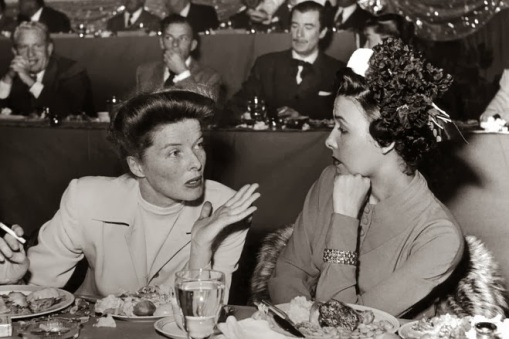 With Dean Martin and Bing Crosby

Lena’s second marriage to  MGM’s  musical director,Lennie Hayton lasted from 1947 till his death in 1971. When they got together, interracial marriage was illegal. They married in Europe and kept their marriage a secret till 1950. 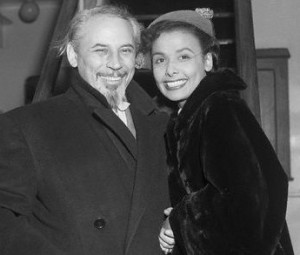 I love this picture of Lena and Lennie.

In 1970-71, Lena suffered the devastating loss of her husband, her father and her 29 year old son.

Lena’s son-in-law for a while was director Sidney Lumet. 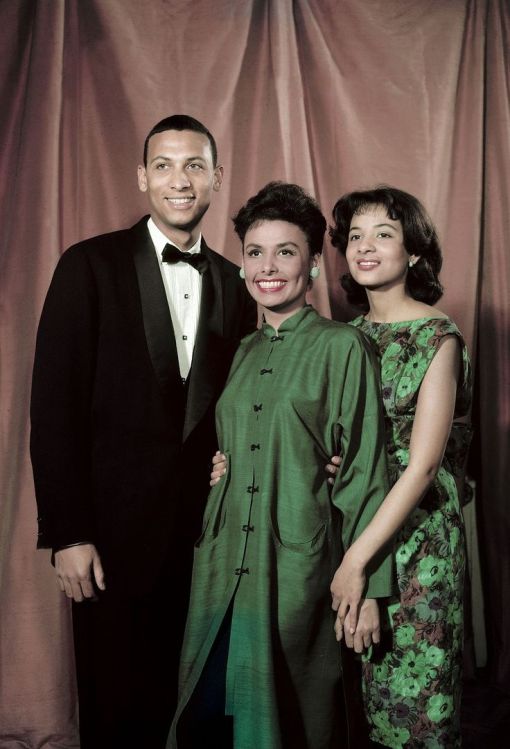 With her children Edwin and Gail

Amidst all her TV and stage appearances, Lena was in the Richard Widmark western,DEATH OF A GUNFIGHTER In 1969. I haven’t seen it but IMDb seems to indicate her role was small.

There is lots of information about Lena  at http://LENA-HORNE.com

And quite a few clips on You Tube.

It’s been informative for me, finding out more about Lena Horne.She was born at the wrong time to have a real career in Hollywood, but it’s great to know how successful she was when she left Hollywood. And how she fought for equal rights.

My last You Tube viewing was of Lena, in 1965, singing ‘Love me or Leave Me’. She has such an expressive face and beautiful hands – and that glorious voice. 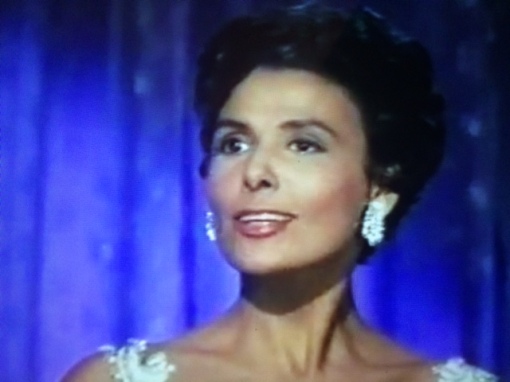