The opening shots of KISS ME DEADLY are totally gripping and so perfect in black and white. The sight of a woman, barefoot, running along a deserted night time highway, with the only sound being her heavy breathing.

In desperation ,when she sees the headlights of a car, she stops in the middle of the road and holds her hands up. She doesn’t move as the car nearly runs her down.

The driver is Mike Hammer and typical of the man, his first words to the mysterious Christina are,”You almost wrecked my car. Well? Get in.”

And thus begins the film that takes hold of you and doesn’t let go till that final scene in the surf when Hammer and Velda escape from the exploding house. 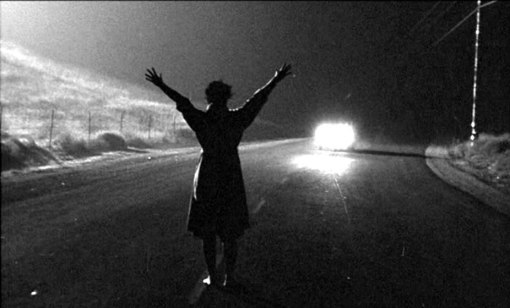 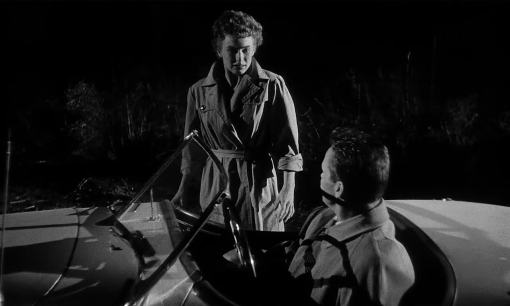 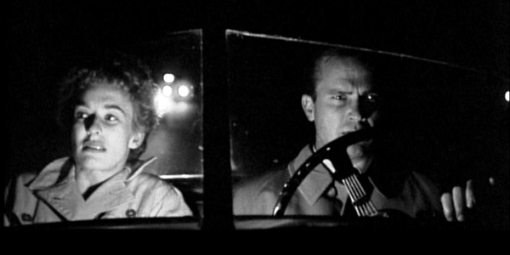 It’s never explained what Christina’s involvement is in the theft of nuclear material.

This was CLORIS LEACHMAN’s first film, and of the three strong females in this film, Cloris was the only one to go on to a successful and long career. 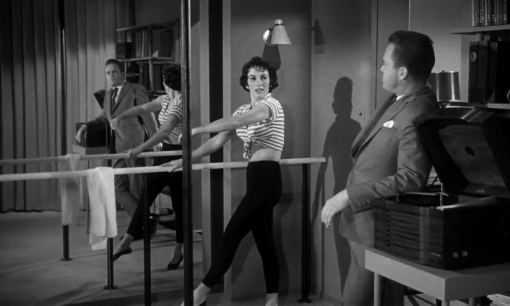 Velda likes to keep fit . She’s tied to Hammer but is also independent of him. Velda loves Mike but sees him for what he is: “You want to avenge the death of your dear friend.How touching.How nicely it justifies your quest for the great whatzit.”

One of my favorite lines: Velda to Mike,

“Do me a favour, will you. Keep away from the windows. Somebody might ……..blow you a kiss.”

This was also Maxine Cooper’s  (1924-2009) first film . She married in 1957 and only appeared in a couple of films after Kiss Me Deadly (Aldrich’s Autumn Leaves and Whatever Happened to Baby Jane.) 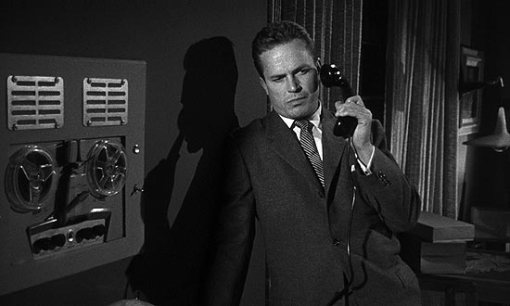 Even Christina sums up Hammer,though she’s only just met him:

“You have only one real lasting love.”

Mike: “Now who would that be?”

Christina: “You. You’re one of those self-indulgent males who thinks about nothing but his clothes,his car,himself.”

WESLEY ADDY has a few choice scenes as the cop who knows Hammer well, and despises him.The contempt in the tone of his voice when he speaks to Hammer is so believable. He calls Hammer, ‘a penny-ante gumshoe.’

I wish Addy had had a bigger part.

Hammer is the Teflon man , everything bounces off him, He wouldn’t recognise a good piece of advice if it smacked him in the face.

His  eyes only reflect dollar signs. Everything is about what’s in it for him. 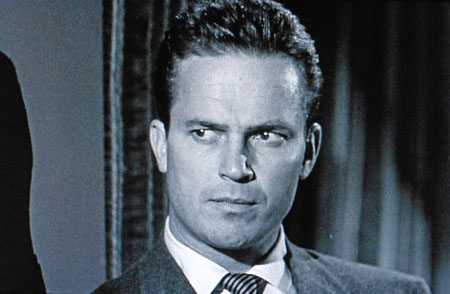 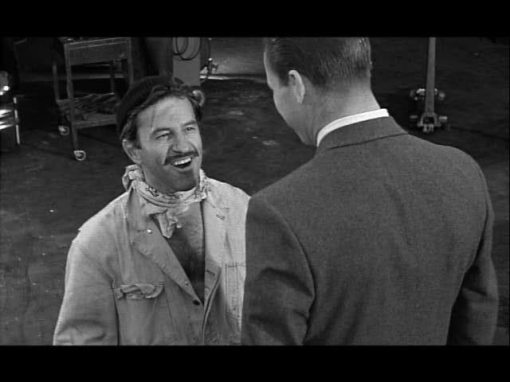 NICK DENNIS is the car mechanic who looks after Hammer’s pride and  joy (his sports car).He admires Hammer and would like to think of him as his buddy. But friendship with Hammer is strictly one way.

Dennis tries to help his pal and pays the cost. He won’t be saying, ‘Va-Va-Voom! Pretty Pow!” again.

Screenwriter A.I.Bezzerides said,”I’m a big car nut, so I put  Hammer in all that stuff with the cars and the mechanic.

I was an engineer and I gave the detective the first phone answering machine. I was having fun.”

Pumping him for information and getting nothing,  and to a back ground of  Schubert , Hammer casually takes a prized record and smashes it in two when he doesn’t get what he wants.

Another great scene where Hammer does get a break from an elderly man (Silvio Minciotti)who is moving furniture on his back. Hammer finds out where Christina’s roommate has moved to. 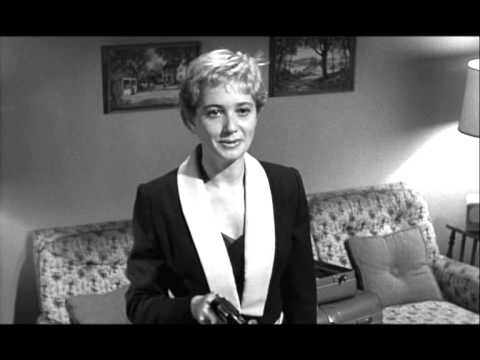 GABY RODGERS was born in Germany in 1928 and grew up in Amsterdam. Interviewed in 2002 by Wes Clark, she said that  Aldrich described the contents of the box in vague terms. She didn’t know what exactly it was – something atomic. 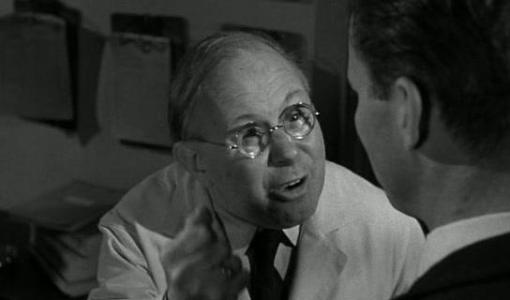 PERCY HELTON only has one scene, as a morgue attendant who tries to blackmail Hammer. Bad idea. 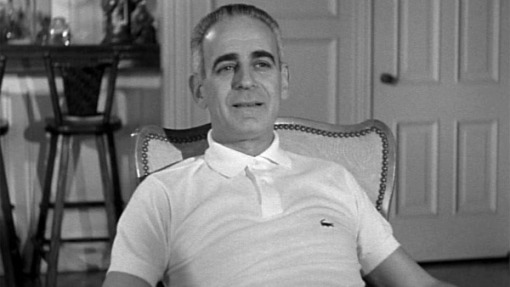 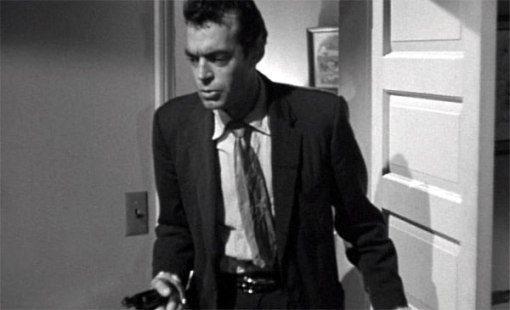 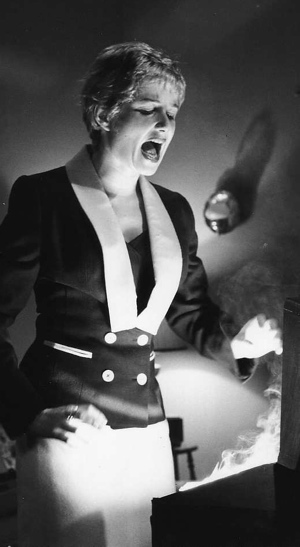 Lily is warned by Soberin(ALBERT DEKKER) not to open the box, but she cant resist. A chain reaction is set off.

Here’s what Robert Aldrich had to say about the ending:

“I have never seen a print without,repeat,without Hammer and Velda stumbling into the surf.That’s the way it was shot, that’s the way it was released. The idea being that Mike was left alive long enough to see what havoc he had caused,though, certainly, he and Velda were both seriously contaminated.”

Apparently, in the early 70’s, French critics took notice of the film and liked the cut ending.

Kiss Me Deadly was shot in 21 days and its budget was $425,000.  Great script, great direction and great cast. 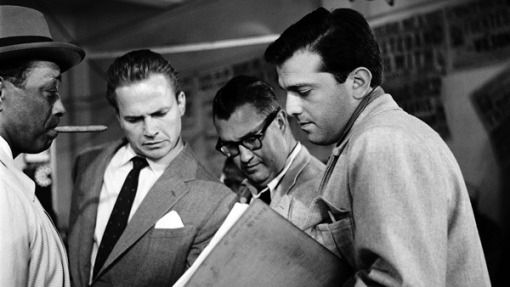 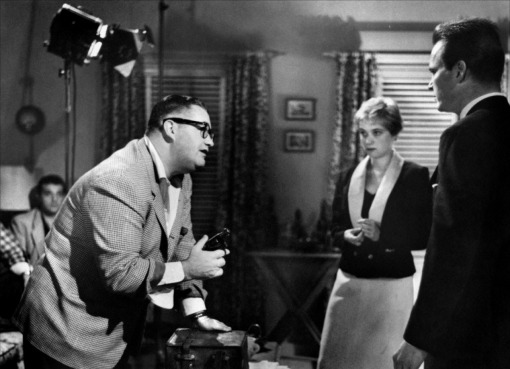 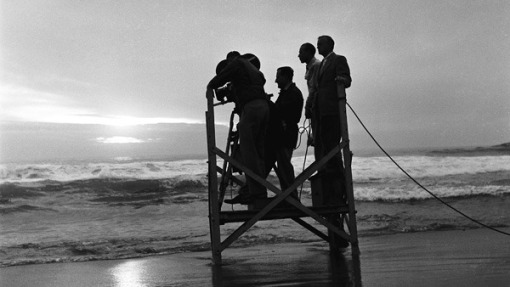 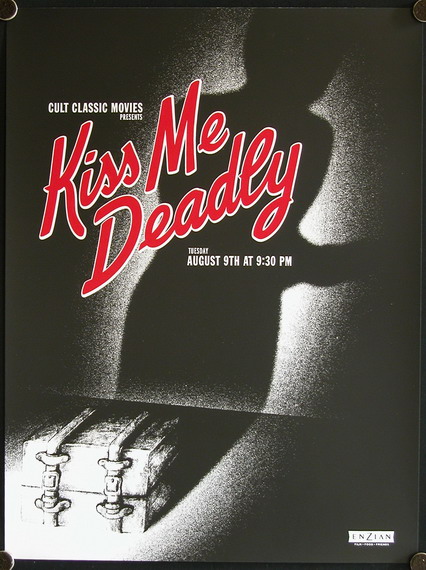