I proudly join the ever increasing number of fans of that odd little film, SHACK OUT ON 101.

Describing this film isn’t easy. I expected so little ( well, that title for a start), but  it draws you in quickly to the likeable characters and then makes you realise they are not all who they seem.

Set in a small roadside diner near highway 101 in California, it feels like a play, with a small cast , and one set , but the writing ( by husband and wife team Edward and  Mildred Dein)  is so good, you are constantly surprised as the plot unfolds.

TERRY MOORE is Kotty (yep, that’s her nickname), a waitress at the diner. She’s in love with Sam (FRANK LOVEJOY) who is a professor of nuclear physics at the nearby research university . His excuse for frequent visits to the diner is of course Kotty, but also the fact that Slob ( see below) provides him with unusual shells for his sea shell collection from the nearby beach!

LEE MARVIN is Slob, the diner’s short order cook who doesn’t seem very bright when we first meet him;

LEN LESSER is Perch who delivers fish ( and other things) to the diner;

JESS BARKER and DONALD MURPHY are Artie and Pepe, two truckers for a poultry firm ( or are they) who like to stop off at the diner.

And that’s about the size of the cast.The diner doesn’t have any other customers.

Slob and Kotty are always fighting. He can’t understand why she prefers the Professor to him. George also likes Kotty but realises she is stuck on the Professor.

Eddie tells George, ” Even if you were Cary Grant, she wouldn’t give you a second look.”

Kotty is trying to better herself by preparing for a Civil Service exam!

Eddie comes by and chats to Kotty and Sam – Eddie still has  bad memories of the war and he values Sam’s advice, which is to go on a skin diving holiday to Acapulco with his pal George. 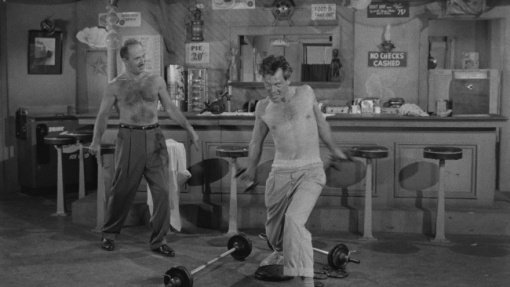 One of the funny scenes in the film. George likes to keep fit ,and he and Slob lift weights and discuss physiques . George says, “We’ll be the envy of muscle beach.”

When Kotty suddenly appears,they  rush to put their shirts back on. 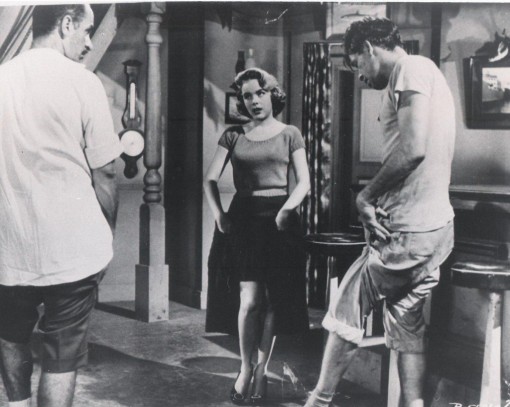 In another spare moment ( the diner is never busy), George asks Kotty to decide who has  the best looking legs. She shows them  her legs. No contest. She says, ” In this establishment, I have.”

So, is this a slight comedy about a small group of people thrown together by circumstance on an isolated stretch of the sea coast?  Well, no.

Slob is the murderous head of a spy ring,receiving stolen secrets via Sam, the professor who is actually feeding Slob information in order to find out who Mr. Big is ( a Mr. Gregory whom Slob keeps telling Sam he’ ll meet.And the two truckers  are secret agents who are also keeping an eye on the diner!

It all unravels  of course and leads up to quite an exciting finish.

The poster lists Terry Moore and Frank Lovejoy as the stars but it really is an ensemble cast. But Lee Marvin steals the film as the most unlikely spy you ever saw. His cover as Slob is excellent!

I was also impressed by Terry Moore. A shame her career never really took off. 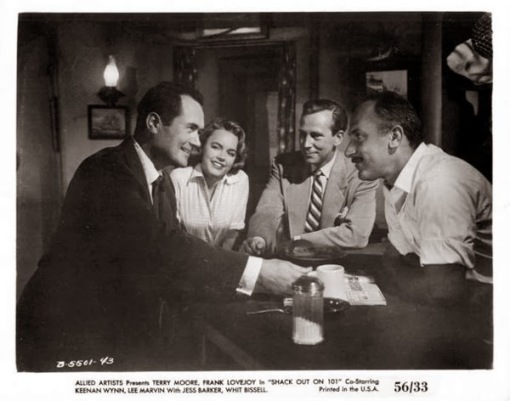 A nice shot of the four friends, Sam,Kotty,Eddie and George.

Another light moment when Eddie and George try on the snorkelling equipment George has bought for their holiday. 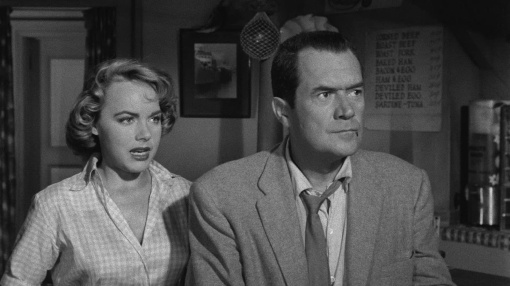 Every so often you come across a little known film which turns out to be far more than you expected. Shack Out on 101 is well written, well acted, well directed and has a plot and characters which hold your interest.

I hope George  and Eddie made it to Acapulco, and Kotty became a civil servant and married Sam. As for Slob,  he’s in prison . No more slinging hash for him. 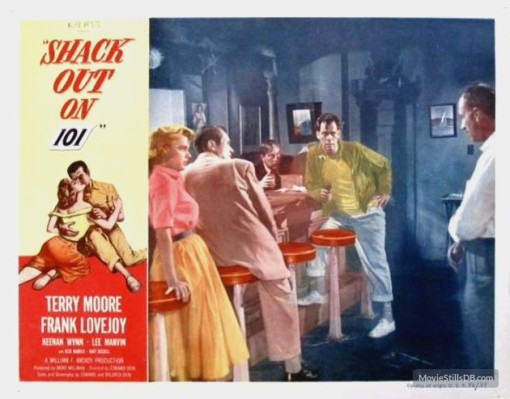