The advertising for LADY IN THE DARK  emphasised that it was in Technicolor and showed one of the fabulous gowns GINGER ROGERS wore. If there was an Oscar for advertising,Paramount publicity should have won  in 1944 – you can’t get any better than PICTURE OF THE CENTURY!

I love how the poster says, “Mischa Auer and Hundreds of Others.” Let’s keep it vague. 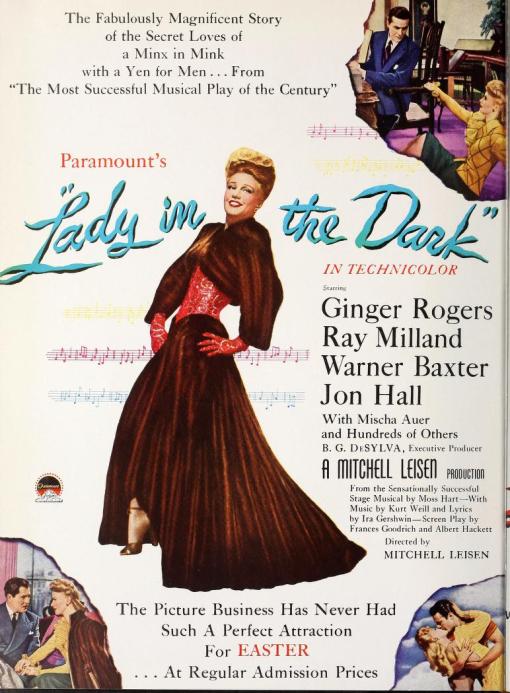 It’s “fabulously magnificent”  and Ginger plays “a minx in mink…..with a yen for men!” The most expensive costume was real mink with a lining of red and gold beads.

That glorious fur lined costume is seem once near the end of the film. 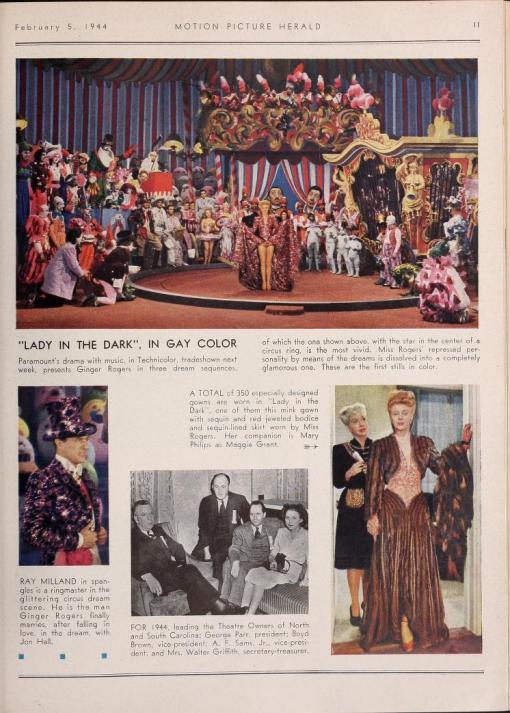 All the adverts above suggest Lady in the Dark is a lighthearted musical. Wrong, poor Ginger Rogers goes through the movie with three expressions – exasperated, angry  or depressed. She plays Liza Elliott, a successful fashion magazine editor who can’t understand why she is unhappy and having bad dreams. Warner Baxter wants to marry her, though he has to get a divorce first.

Hollywood star Randy Curtis ( Jon Hall) instantly falls in love with her. The only man who shows no interest is Charley Johnson ( Ray Milland)  who works for her and keeps calling her ‘Boss lady’.  He wants her job. You can guess who she ends up with.

The above suit is what Ginger wears through most of the film. I can’t describe her hairdo but I guess it was the height of fashion in 1944. 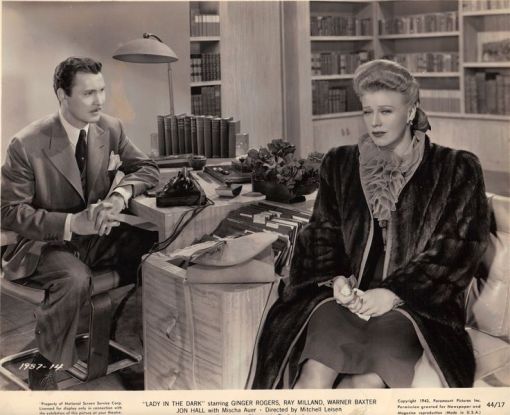 I hardly recognised a young Barry Sullivan as Liza’s analyst. She tells him about her dreams which are then brought to life as musical interludes – the blue dream, the wedding dream and the circus dream.

Sadly, much of the Kurt Weill/Ira Gershwin score was dumped by Paramount. One of the most beautiful songs,’My Ship’ is completely overlooked although it plays an important part in Liza’s story. The most we get is Ginger humming it a few times.  Ginger later confirmed to Ira Gershwin than she had recorded the song. Heaven knows why it wasn’t used.

Ginger does have one extended dance number with Don Loper, in the wedding dream.

The one number which was more or less intact was “The Saga of Jenny” in the circus dream. It’s  about a lady who could never make up her mind –  which is reflective of Liza in real life. 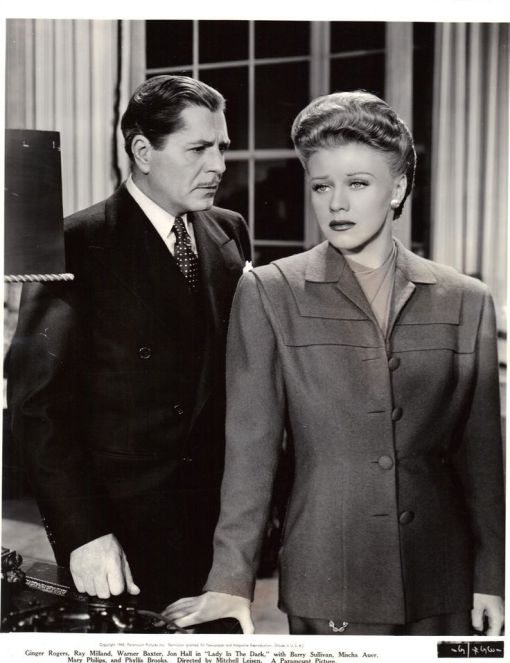 A small part for Warner Baxter as Kendall Nesbitt who finally tells Liza his wife has agreed to a divorce. 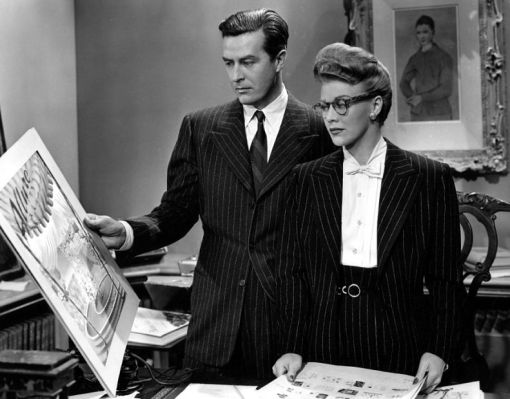 Business women have to wear glasses and striped suits, just like the men.

During the filming, producer Buddy DeSylva allowed Ginger to take time off to get married to John Calvin Briggs.

The film was a big success for Paramount.I wasn’t so impressed and found it downright dull in parts . Maybe director Mitchell Leisen spent too much energy on the sets and costumes.

Mischa Auer  ( with hardly a trace of his usual accent) takes on the part of Russell Paxton, the magazine photographer – the part which was created by Danny Kaye on Broadway. By the time the film was made, Danny was already under contract to Sam Goldwyn and couldn’t be released for the film. His famous song from the stage play,”Tchaikovsky” was eliminated from the film’s score. In it, Kaye rhymes off the names of 49 Russian composers in double quick time. It stopped the show. 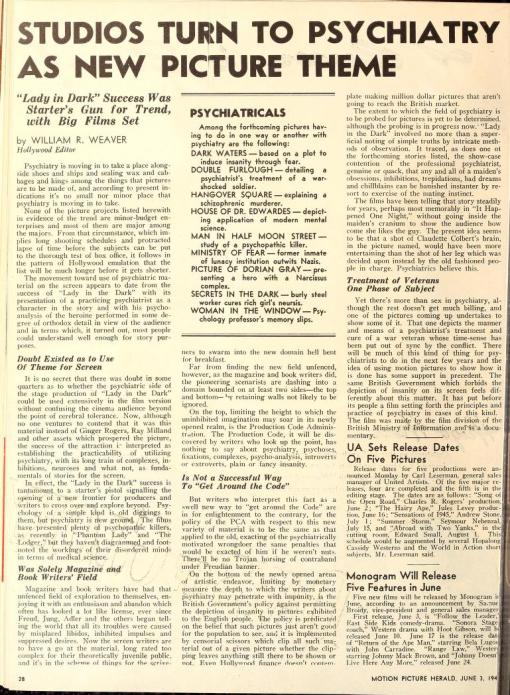 I love the quote from the above 1944 article,

“The Production Code will exact of the psychiatrically motivated wrongdoer the same penalties that would be expected of him if he weren’t nuts. There will be no Trojan horsing of contraband under a Freudian banner.

Having just read  “Lady in the Dark,Biography of a Musical’ by Bruce D McClung  ( thanks Alistair), I’m reminded that the role of Liza was created by the legendary stage performer , Gertrude Lawrence in 1941. Her three  Broadway costars were all snapped up by Hollywood – MacDonald Carey ( in the Ray Milland role), Danny Kaye ( as the photographer) and Victor Mature as Randy Curtis.

I love this shot of Gertrude in the circus dream.

Victor Mature is at far left.

And she made it on  the cover of Time. (Danny Kaye on the right).

When news of the film version was announced, Gertrude said, “I feel like a mother who is kissing her favorite child goodbye.”

Victor Mature in the Circus dream.

The show has had a long life. On radio, Gertrude Lawrence  did an edited version in 1947 and it is a delight to hear her. (Check http://www.oldtimeradiodownloads.com)

And also on radio in 1953, Judy Garland played Liza opposite John Lund. I haven’t heard this version.

There is a wonderful studio cast recording from 1963, starring Rise Stevens.

Ann Sothern played Liza in a 1954 live  TV production which  is out on dvd and included most of the score from the original Broadway show. Lovely songs like ‘Girl of the Moment’, ‘This  Is New’, ‘Princess of Pure Delight’  and ‘My Ship’. 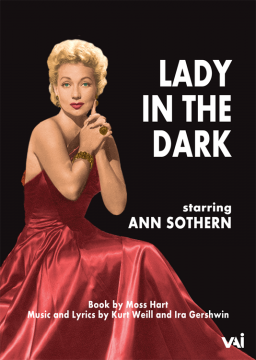 As much as I like Ann , I didn’t think she was ideal , but the production was more faithful to the original . Carlton Carpenter played the Danny Kaye role and did  the Tchaikovsky number.

My memories are faint but I know I made a trip to Nottingham in 1981 to see CELESTE HOLM as Liza. 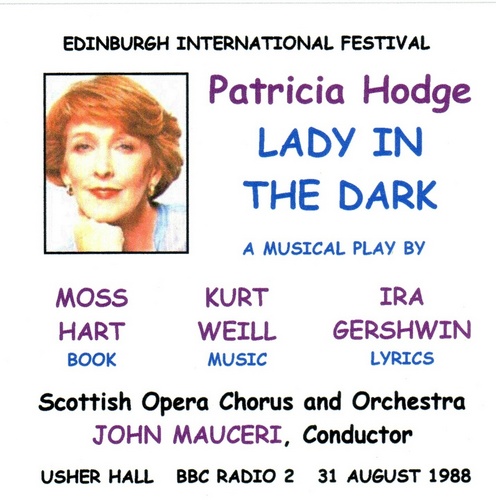 The one lady I would have liked to do a full stage revival of Lady In The Dark – PATRICIA HODGE. She had the look and voice of Gertrude Lawrence.

This concert performance in Edinburgh was very good. 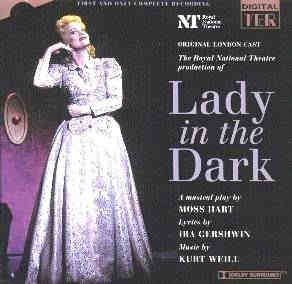 The 1997 National Theatre production, with Maria Friedman as Liza. I saw this production, but again, didn’t think Maria was suited to the role.

In STAR!, JULIE ANDREWS played Gertrude Lawrence and performed ‘The Saga of Jenny’.

Nothing to do with Lady in the Dark, but just because I am such a big fan of Miss Lawrence, here are a  couple of pics from the other role which Gertrude created, Anna in THE KING AND I.

Gertrude Lawrence, THE KING AND  I.