It has been described  as the film that killed JOHN WAYNE.

The history of THE CONQUEROR has always highlighted the number of cancer related deaths of the people who worked on this film.

Director DICK POWELL died in 1963. PEDRO ARMENDARIZ was diagnosed with cancer in 1960 and committed suicide in 1963.

SUSAN HAYWARD, John Wayne and AGNES MOOREHEAD died in the 1970s ,and JOHN HOYT succumbed in 1991.

The film had a cast and crew of 220 and People magazine in 1980 stated that 91 of that group contracted cancer.

The Conqueror was filmed on location in 1954 in Utah, near the town of St.George.

137 miles away, in Nevada, there were above the ground nuclear weapon testing a year earlier in 1953. The filmmakers were reassured by the Federal Govt that the tests caused no hazard ie radiation fall-out.

Increases in cancer rates in Southern Utah have been reported since the 1950s  to today. But the connection has been near impossible to prove.A report from the National Cancer Institute said that out of a group of 220 people,  88 might be expected to develop some form of cancer.

No one sued the studio,RKO, or the producer Howard Hughes.

In 1990, the US govt. set up the Radiation Exposure Compensation  Act for the states of Nevada, Utah and Arizona, as an alternative to litigation. “Downwinders” ( those who lived downwind of the Nevada test site) could make claims if cancer had developed .

I don’t know if any surviving cast and crew of The Conqueror applied for compensation . 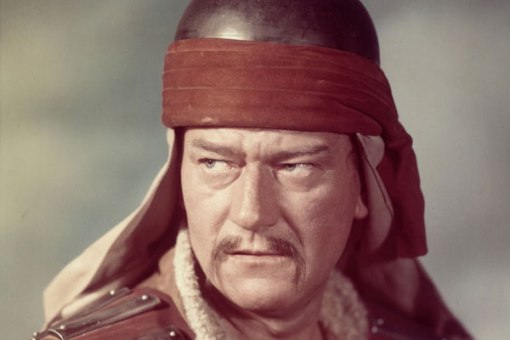 The Conqueror was the last grandiose personal production of Howard Hughes. He sold RKO before the  film’s release.

It was the first RKO film in CinemaScope and cost $6 million to make.

It may have been critically mauled, but it did make a profit.

Even saying the words, “John Wayne is Genghis Khan”  sounds ridiculous . The New York Times called it ‘an oriental western.’ 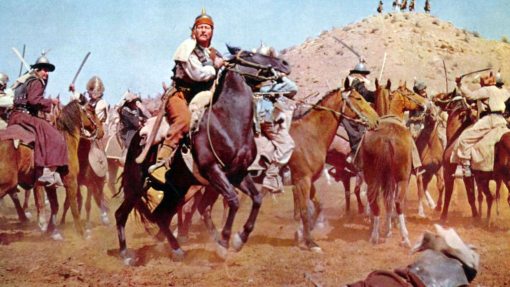 Wayne is Mongol chief,Temujin ,a 12th century warlord who captures Bortai (Susan Hayward) who is the daughter of his enemy, the Tartar leader (Ted de Corsia).

Also in the cast, Agnes Moorehead as Hunlun, Temujin’s mother. (Agnes was 7 yrs older than Wayne.)

One reviewer said, “Not even a dental hygienist could find authentic tartar in this movie!”

John Wayne seems to have relied on makeup, costumes and a Fu Manchu moustache for his characterisation , but he is still John  Wayne. Did common sense not warn him that the following dialogue screamed out this is all wrong:

“Your treacherous head is not safe on your shoulders.”

“You’re beautiful in your wrath.”

Susan Hayward was borrowed from Fox and again you wonder why she would agree to this film.

The 1950s did produce many religious and historical epics, so maybe this story didn’t seem particularly out of place on the studio schedules, but again, whoever thought this was a vehicle for John Wayne.

This scene looks more like an Arabian Nights movie.

It is said that Howard Hughes loved this film. He bought every print of it for $12 million and kept it out of circulation until Universal in 1979 purchased the rights from Hughes’ estate. 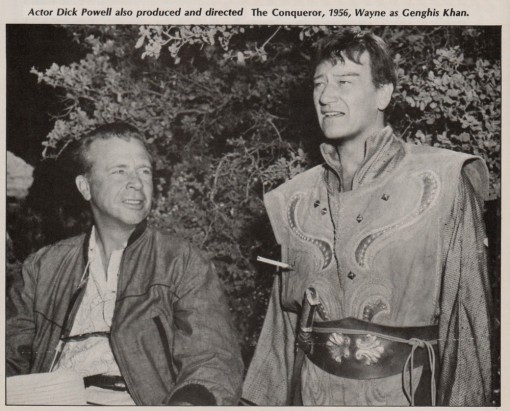 One might also wonder why Dick Powell , who had directed only one film , was given the job of directing such a large scale production.

Armendariz plays Jamuga, Temujin’s second in command. Susan seems to be the only cast member to have escaped the Asian makeup. 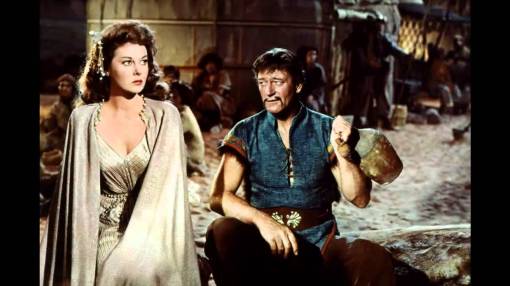 Oh my. It’s that moustache! 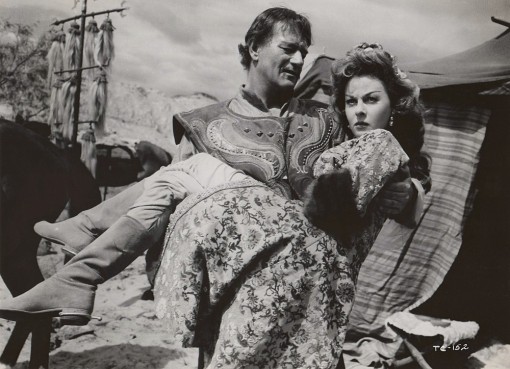 Oh, John. this is a BIG mistake. 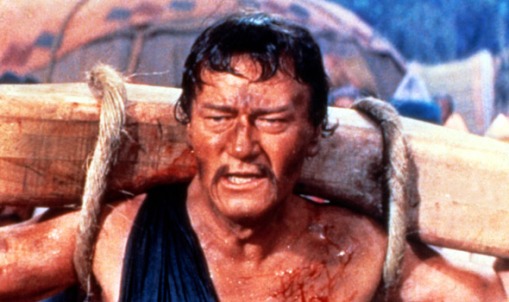