It’s a long time ago  but I remember the excitement when I heard that BETTY GRABLE would be in my home city, Glasgow for a tryout of a new musical which was called “The Peaceful  Palace” – later changed to “Belle Starr”.

It was 1969 and Glasgow’s finest theatre ,the Alhambra was still standing.

I wish I could say the experience was still clear in my mind, but all I remember is that the musical was disappointing, not very tuneful, and that there were long periods when Betty was off stage.

But she did get a  tremendous ovation from the audience the night I was there. And she still had the best legs in Hollywood.

With the Grable name, the show did well in Glasgow, but when it transferred to the Palace Theatre in London, even the name change didn’t help it. It ran for two weeks then closed.

Not a great experience for Betty, or for Rory Calhoun, whom I understand  was one of the producers.

In Glasgow, Betty met up with one of her biggest fans, Glaswegian Tom McGee who went on to write a biography,”The Girl With The Million Dollar Legs.”

When Betty’s contract with Fox wasn’t renewed in the mid 50s, she did a lot of stage, TV and nightclub work. She had a lot of success on stage with BORN YESTERDAY, and also did HELLO DOLLY.

Betty would have been a fine Miss Adelaide in the film of GUYS AND DOLLS, but the producers went with Vivian  Blaine who had created the role on  Broadway.

And Betty as we remember her in the dazzling, technicolor Fox musicals which were so popular in the 1940s. 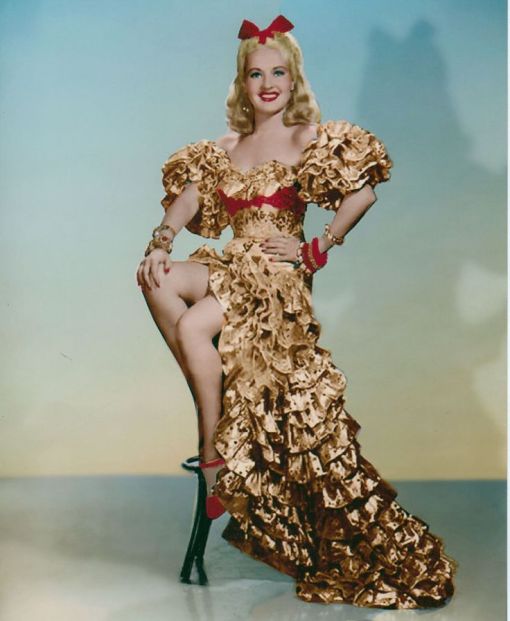