When I read that LA LA LAND was being considered as an homage to the great Hollywood musical, I went to see it and came away wondering why this film is being praised so much and is winning award after award.  I realise that a large percentage of audiences may not even know musicals from the classic era , and of course musical tastes change.

What I saw in this film doesn’t  compare in any way with SINGIN’ IN THE RAIN. To put it bluntly – in my opinion – the two principals cant sing or dance and the music is mediocre. Of the few musicals made these days, the perception seems to be that the stars don’t have to be trained singers or dancers.

What’s wrong with expecting a song and dance number in a multi-million dollar movie to be of the highest standard? There is a number in the film vaguely similar to Dancing in the Dark from THE BAND WAGON, but the difference is like night and day.

Take me to town (to quote Ann Sheridan) if you want to, but remember that the film’s director and publicity invited comparisons.

The LA LA LAND bandwagon rolls on, and Oscars are on the horizon. Personally I need to watch a real musical, though I don’t really need reminding what an Astaire or Kelly or Powell can do. I’m even thinking that dubbing wasn’t such a bad thing! 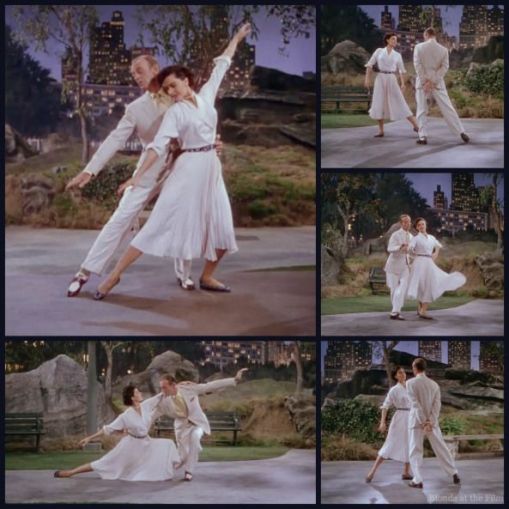