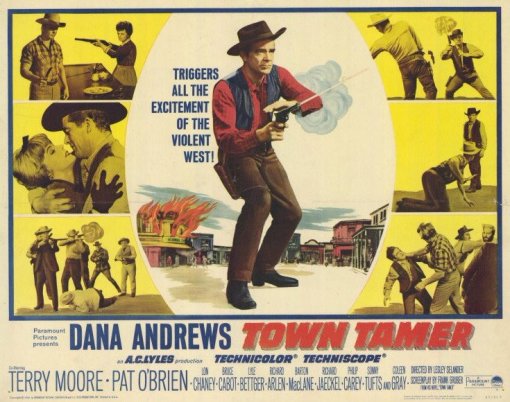 Of the 13, I have only seen two – Town Tamer and Johnny Reno – but now I hope to catch up with all the others. I looked up some statistics on these films and it makes for interesting reading which I’ll talk about after looking at Town Tamer.

A double dvd box set would be great!

The story immediately moves on 2 years when Rosser has been hired by railroad owner James Fell (Barton MacLane) to make the city of Great Plains more peaceful. Fell has also given Rosser a piece of land as a cover for him coming into town.

On the stagecoach into town, Rosser meets Susan Tavenner (Terry Moore) who has come to town to find her husband Guy (DeForest Kelley).

The town is in the iron grip of saloon owner Riley Condor (Bruce Cabot) and his two ‘lawmen’, sheriff Ring (Bettger) and deputy Honsinger (Richard Jaeckel).

The town mayor is Leach (Lon Chaney jr) and the local doctor is Dr. Kent (Richard Arlen), both of whom oppose Condor.

Rosser knows that it was Condor who hired the killer two years earlier. He lets everyone know he intends to kill Condor.

The film is  full of action  and fast paced. And what a lineup of stars.

In a nice change for Lyle Bettger, his character is not a straight-out gunslinger. He works for Condor but attempts to protect Rosser, showing some regret for his previous actions. 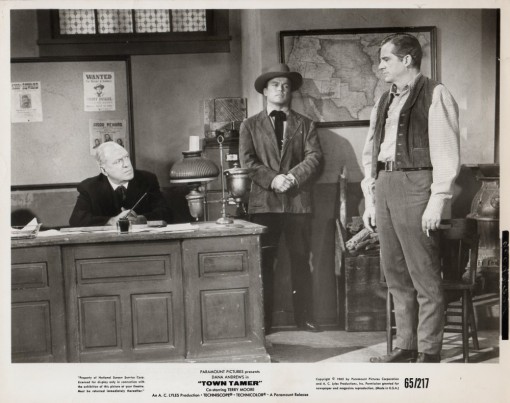 A.C. Lyles assembled a repertory company for his western series.  Lon Chaney Jr appeared in 7 of them;

Richard Arlen was in 8 of them; Don Barry was in 5, De Forest Kelley was in 4.

Dana Andrews, Barry Sullivan, Rory Calhoun, Howard Keel all made more than one of the Lyles films.

A.C. (Andrew  Craddock)  Lyles  sometimes wrote some of the scripts under the name Andrew Craddock.

Lyles joined Paramount in 1937 as an office boy and worked his way up to director of publicity. His 60s westerns were made on a strict budget and schedule. He provided work for so many Hollywood veterans. 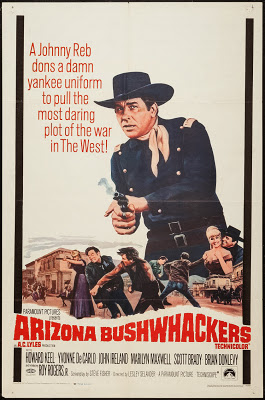