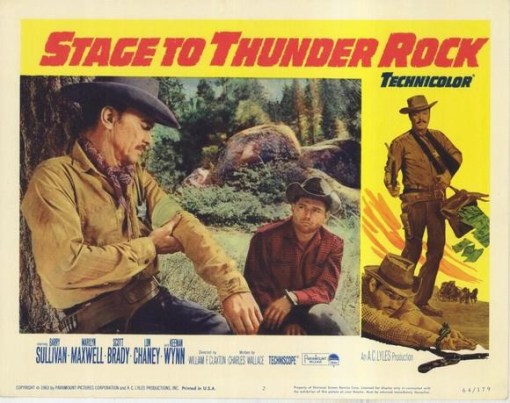 I guess the A.C. Lyles series of westerns in the 1960s are a bit of a hit and miss. This one is definitely on the miss  side. Far too talky and not enough action. But I like a beginning when you are in the middle of a drama, and then the background unfolds.

The film opens with Sheriff Horne ( Barry Sullivan) riding up to the Sawyer ranch to pick up two brothers who are bank robbers. One of them draws a gun on Horne who is forced to kill him. He takes the other brother Reese (Ralph Taeger) (and the stolen $50,000) into custody. Reese threatens Horne that his father Ross Sawyer (Keenan Wynn), who isn’t at the ranch,  will gun Horne down when he hears about what’s happened.

Back in town, the bank manager Acres (Robert Strauss) and the town mayor Dollar (Allan Jones) have brought hired gunslinger Sam Swope (Scott Brady) into town as insurance against Horne not getting the Sawyers or the money. The reason for their lack of faith in the Sheriff is that Horne was brought up by Ross Sawyer.

Swope has brought his wife (Wanda Hendrix) and young daughter to town with him. His daughter is blind, and all Swope wants to do is collect the reward for the brothers and pay for treatment for her. But the Mayor and the bank manager want him to get rid of Horne too.

So, that’s the set up. We also see Leah Parker (Marilyn Maxwell) in town. She’s down on her luck and planning to get the stage to her folks’ home, a way station out of town. She hasn’t seen them for years.  They think she’s a school teacher.

Horne arrives at the way station with his prisoner  and Swope makes it clear what his intentions are.

Leah and Horne have history together. She tends his wound.

Lon Chaney is Parker, Leah’s father. (Anne Seymour is his long suffering wife) . Parker has given up on life, the way station is about to close and unless they raise some money, the family will have to leave. A nice touch is to have an Indian family set up a tepee nearby, waiting for the Parkers to leave so they can take over the house.

A good third of the film stays inside the way station, with everybody talking but not saying much!  Eventually Sawyer shows up and there is a showdown.

I would have preferred more scenes in town.

A cast jam packed with star names, but  with little screen time.

Allan Jones (whom I didn’t recognise), Robert Strauss and Wanda Hendrix had only one scene, Keenan Wynn had little more to do. Anne Seymour impressed as the woman striving to keep her family together. And I liked Ralph Taeger (whom I remember from the TV series Hondo) as the no-good brother trying desperately to get away. Marilyn Maxwell came over well too.

Sullivan and Scott are convincing as the relentless sheriff and the gun for hire who only wants to save his daughter.

Publicity shots for the film. 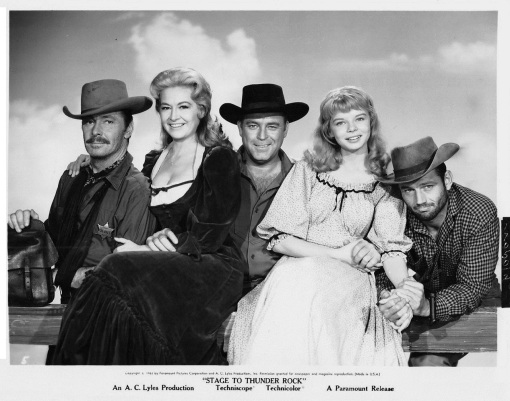