A dear friend ,Ken Sephton died in March this year. Our friendship lasted over 40 years, despite living 400 miles apart.

In the days before the Internet and emails, we exchanged letters weekly. He wasn’t interested in computers and we continued corresponding through the mail.

We always met up on my many London visits and he loved reminiscing  about his early years in London – and he had a great memory. Ken often sketched stars when he met them ( and had them signed.) He would often show them to me and tell me of the circumstances of the meetings.

Ken lived in London from the late 1940s and he saw and met so many stars, I hope you will enjoy, as I did, some of his wonderful experiences.

Ken once jotted  down for me details of one of his first trips to London in 1947 (He was about 20 at the time.)

…..At Noel Coward’s last night of “Present Laughter” at the Haymarket – Noel made a speech.

……..Spoke to Picturegoer’s Hollywood correspondent,W.H.Mooring at the Strand – matinee of”Ever Since Paradise”, with Roger  Livesey.

……….Matinee of “Voice  of the Turtle”, with Margaret Sullavan and Wendell Corey. In the evening, Dolores Gray in “Annie Get Your Gun.” 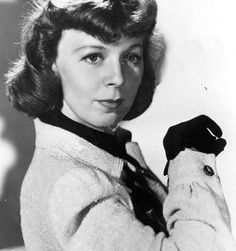 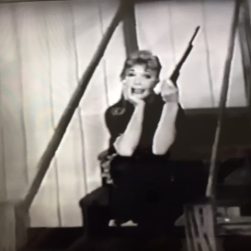 Ken met and talked to Marlene Dietrich many times:

“Once, at the stage door,  she laughed and joked, even sitting on the roof of her car, cheerfully showering postcards of herself at the adoring fans.”

When Frank Sinatra’s career was at a low ebb in 1951, Ken went to see him in Clapham at a concert he gave in a half empty cinema:

“I felt so sorry for him at this period.”

Ken attended many London film premieres. He saw Greer Garson and Errol Flynn arriving at the Odeon Marble Arch for “The Forsyte Saga”. Ann Sothern and Rosalind Russell arrived together. ( It was  a Royal Film Performance.) 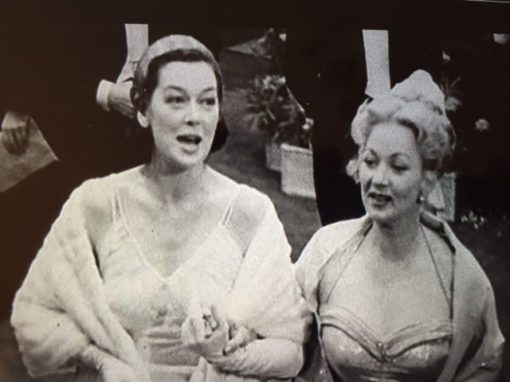 For the Royal premiere of THE MUDLARK, at the Empire,Leicester Square, Ken had a ticket:

“I entered behind June Haver , with flash bulbs popping. I stood in the foyer to watch others arrive – Vera Ellen, Tyrone Power ( with his wife Linda Christian), Montgomery Clift with Gloria Swanson, Marlene Dietrich with Michael Wilding, Bebe and Ben Lyon.

I watched Irene Dunne and Claudette  Colbert descend the elegant staircase, arm in arm, after their presentation to the royal party.”

I am grateful to the Irene Dunne website for this rare photo (http://irenedunnesite.com).  From left to right.

(There was an onstage performance of a song from ‘Floradora”).

Ken saw Audrey Hepburn when she was in the chorus of “Sauce  Tartare”, at the Cambridge theatre in 1949.

You can just about spot Audrey’s  name at bottom left.

In 1956, Joan Crawford attended the premiere of AUTUMN LEAVES at the Plaza cinema.  Ken said:

“ There were not the usual crowds. As she stepped from her car,she spotted the small group of fans and came over to us, signing autographs and chatting, even though the Lord Mayor was waiting in the foyer to greet her.”

In 1960, Ken chatted to Jeanette MacDonald after she and Gene Raymond had attended a play at the Comedy theatre:

“She was simply dressed, her short fine auburn hair sprinkled with grey….as they walked away, arm in arm,they both donned spectacles!” 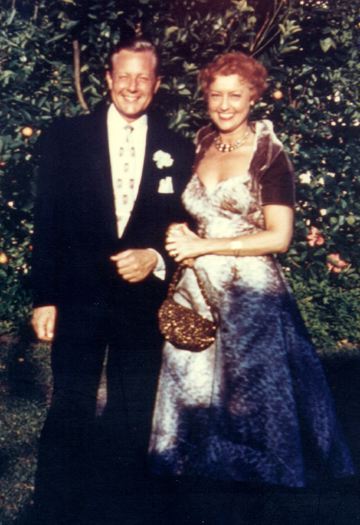 Ken was a long time member of THE JUDY GARLAND CLUB, and for many years he edited the club magazine, ‘The Rainbow Review.’

(I remember once being at Ken’s house when a group of Club members got together to assemble the pages of the magazine – it was quite a job as most issues had about 70 pages.)

He met Judy many times. A highlight was in 1964 when Judy attended a club meeting at the Russell Hotel.

“So unassuming and amusing….she sang her thanks to the club members to the accompaniment of a tinny, out of tune hotel piano, with “I Wish You Love” and “Make Someone Happy.”

Ken loved Judy’s films and said of her version of ‘By Myself’ in I COULD GO ON SINGING:

“It always sends tingles up and down my spine – it is quite electric and I love how she strides off stage at the end of it, flicking the curtains.”

In one letter in 2004, he said: “I went out on a dark damp night to the NFT for the rare HER CARDBOARD LOVER. Norma (Shearer) was exquisite in looks, voice and elegance.”

“Ken was a vital and fascinating character, full of great showbusiness tales, and a huge source of information on all things film  and theatre related. I was proud to have been an acquaintance of his for many years as we both had a great affection for Marlene Dietrich and Judy Garland.”

So, here’s to you, Ken. it was my great pleasure to know you. 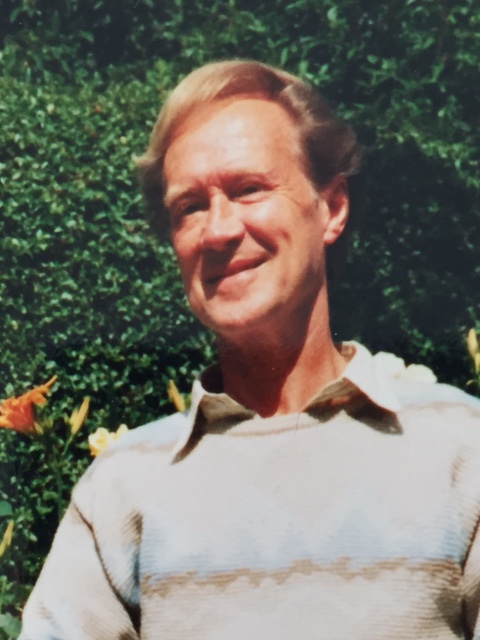