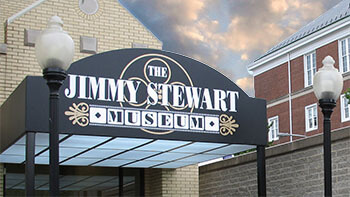 The Jimmy Stewart Museum is situated in James Stewart’s home town of Indiana, Pennsylvania. It’s on the third floor of the Indiana Public Library on Philadelphia Street.

Memorabilia from Jimmy’s childhood, military career and his films are on display, including a Winchester rifle and a propeller blade signed by the cast and crew of The Flight of the Phoenix.

The museum opened in 1995, with  his daughters, Kelly and Judy in attendance.

There is a 1930s style vintage movie theatre in the museum, with a sound and projection system donated by Universal Studios.

Near to the museum is Jimmy’s birthplace, childhood home and his family’s former hardware store. And a bronze statue of Jimmy.

In 1996 the Harvey Award was inaugurated by the James M. Stewart Museum Foundation, and June Allyson was the first recipient of the award. The award is presented on Jimmy’s birthday in May. Previous recipients have included Janet Leigh, Shirley Jones and  Ernest Borgnine.

The museum has an online store at http://jimmy.org

Indiana is a small town in rural Pennsylvania, but visitors come from far and wide to see where James Stewart grew up and to visit the museum on the third floor.