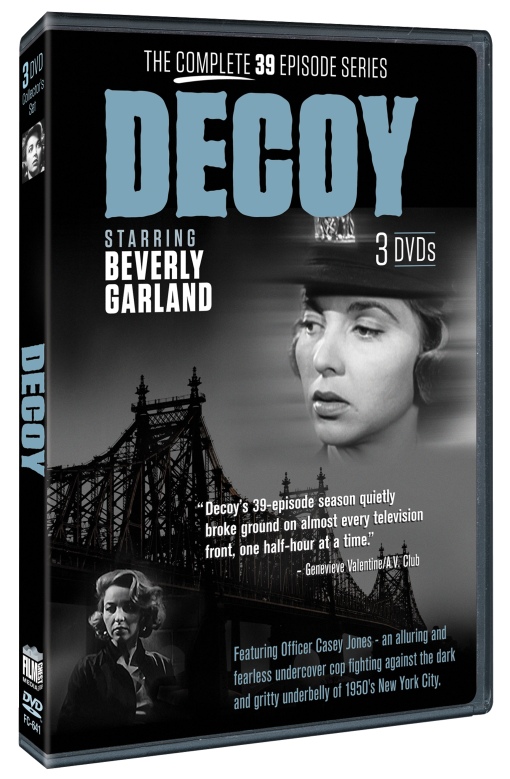 A TV series I had never heard of, DECOY, ran for 39 half hour episodes   in 1957/58. It starred BEVERLY GARLAND and was made and shot in New York.

Now released on DVD in three discs, each of which contain 13 episodes, the picture quality  is fine but the sound is poor ( maybe due to pressing so many episodes on one disc).

A big role for Beverly Garland (1926 – 2008) who handled it very well, being in almost every scene , as Policewoman Patricia ‘Casey’ Jones who is invariably undercover on assignment to different branches of the NYPD.

The show’s opening titles say that it is “Presented as a tribute to the Bureau of Policewomen, New York City Police Dept.”

(This bureau was disbanded in 1973, the same year that patrolmen and policewomen were renamed Police Officers.)

The show is reminiscent of Dragnet, a  police procedural based on actual cases.

We learn very little about Casey’s personal life, and never see her with fellow policewomen. Unusually, there are no other regular cast members .

In the above photo, Casey is in uniform, but for most of the show she is undercover. Typical of the times, Casey smokes a lot.

Beverly also does voice-overs during some episodes ,either commenting on a scene or explaining some action.

More disconcerting is that she, at the end of some episodes, speaks directly to the camera, summing up the case or commenting on a character. This device, called ‘breaking the fourth wall’, added to the documentary style but it was not a good idea.

It’s fascinating to see her on the streets of 1950s New York. I spotted a Times Square marquee which featured FIRE DOWN BELOW, with THE BROTHERS  RICO. Another cinema had BAND OF ANGELS.

Other locations included Madison Square Garden, Grand Central Station,Brooklyn Bridge. The production company couldn’t afford to have streets roped off, so they kept the cameras hidden as much as possible.

Policewomen back then had their gun and handcuffs in their handbag slung over their shoulder. But there was very little gunplay in the show.

In one episode, Casey is forced to kill a gangster – the first time she has killed anyone. There’s no discussion afterwards on how she feels or how she’s affected by the shooting.

The only piece of personal history we learn about her is that she had a boyfriend who was killed in the line of duty .

Her  tough undercover cases include basketball  game fixing, drug addiction, murder in a women’s prison.( One of her aliases is called ‘Beverly’.) The plots are noirish in nature and the pace is fast.

Interestingly, in the 25 episodes I’ve watched so far, there is hardly a Hollywood face to be seen. Presumably it was too expensive ( or considered unnecessary) to bring actors from California.

It was a great role for any actress , playing so many different characters. Beverly  took on the role and made it her own. She brought sympathy to the role, as Casey cared about the people who were in trouble and tried to help them.

There’s no hint of sexism – Casey is obviously a skilled and experienced officer in the undercover work she does.

The documentary style didn’t exactly work for me. Although the stories were well written ,  I would have much preferred it if there had been cast regulars in support of Beverly and a little bit more time time spent on Casey outside of the job.

Maybe if the series has been picked up by one of the networks, it could have continued. Or maybe the similar Naked City ,starting in 1958 , took Decoy’s place.

DECOY had fallen into the public domain. Some episodes have been available over the years, but it is good to have the whole series. Just a shame about the sound quality. The box set contains a 14 page booklet, with brief summaries of every episode and articles and pictures. Priced at just under £12, the set is  a bargain from Film Chest media group.

Beverley’s film career was relatively short and she featured mainly on television.  But, with Decoy, she will be remembered for being  in the first crime drama series to headline a woman.

Beverley’s husband was in real estate and they opened a hotel near Universal Studios.  It’s now just called The Garland.

I don’t know why Beverly wasnt more successful in Hollywood.

She continued guest starring in many TV shows, and was Fred MacMurray’s wife for three seasons of  My Three Sons. 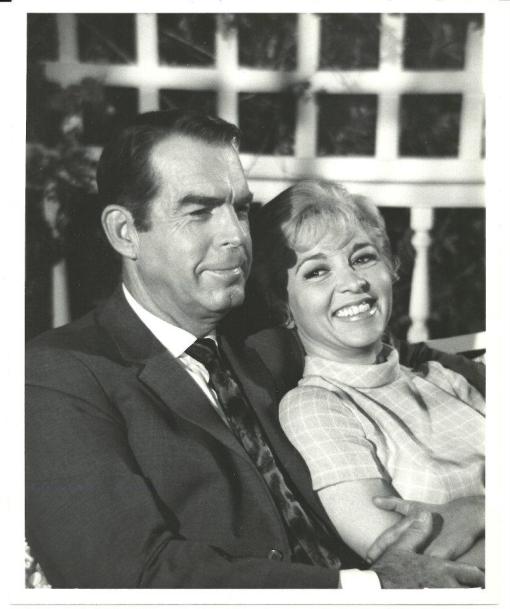 Beverly with Fred MacMurray in the TV Series, MY THREE SONS.