There’s one scene in THE WOMAN ACCUSED which is breathtaking in its brutality. CARY GRANT is a  lawyer who goes to see JACK LA RUE who plays a killer for hire. La Rue has lied to the District Attorney about Cary’s fiancée,NANCY CARROLL who is accused of killing her ex- lover, LOUIS CALHERN

When La Rue makes it clear he won’t change his testimony, Cary takes out a rawhide whip  from under his jacket and proceeds to flog La Rue all over his body.. La Rue cries out in pain and falls to the ground. I counted nearly 10 blows. Blood flows from the cuts the whip inflicts.

And this from Cary Grant! 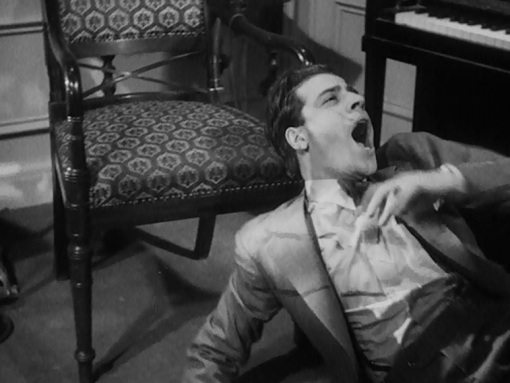 Cary then drags La Rue back to the D.A.’s office where a sobbing La Rue confesses his lies.

Definitely a scene that would never have been allowed after the Production Code came into force.

It’s not a great role for Cary though he and Nancy Carroll , in their second film together, are a good team.

LOUIS CALHERN has a few good scenes as Nancy’s ex-lover who won’t take no for an answer when she says she is going to marry Cary.

He threatens that he will have Cary killed – he has already used Jack La Rue to get rid of someone. In her presence, he phones La Rue and tells him what he wants done.. Nancy grabs a heavy ornament and hits him. The blow kills him.

The other main character is JOHN HALLIDAY , a lawyer friend of Calhern. He is determined to prove Nancy killed Calhern. 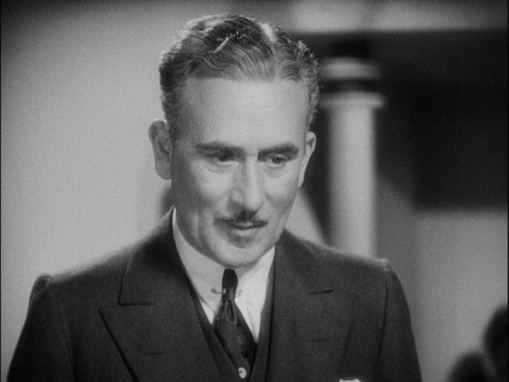 There are some good scenes aboard a boat (Cary’s in costume for a fancy dress party.) Halliday has followed them and suggests a mock trial, with Nancy as the accused. Soon the lines between play  acting and the real events gets blurred.

I was impressed with the actor playing the District Attorney. Played by IRVING PICHEL  who was in quite a few films as well as directing ( SHE, THEY WONT BELIEVE ME).

Someone else who made an impression ,though she was only in a few scenes , was NORMA MITCHELL who plays Nancy’s maid who has been with her for many years.

Norma was a stage actress and this was the first of only three films she made.

The Woman Accused came from a series in Liberty magazine in 1933. Spread over four weeks in the magazine, 10 well known authors contributed to the story.

Paramount’s publicity  for the film had the authors appearing on screen over the opening credits. They included Zane  Grey and Vicki Baum. I havent read  the magazine story, so don’t know how much was used in the screenplay.

Although the story is intriguing, the pace of the film made it feel long at 73 minutes.