Part of my Cary Grant 18 film box set, THE EAGLE AND THE HAWK is Fredric March’s film and he didn’t even receive an Oscar nod. Though the film is considered one of the best World War 1 dramas, along with WINGS, HELL’S ANGELS and THE DAWN PATROL.

March plays Jerry, an American flier and part of a group of Americans who join the Royal Flying Corps and are assigned to an Observation Unit in France. His buddy is Mike (played by Jack Oakie) and Cary Grant is Crocker who joins them later after Jerry has deemed him not good enough for the mission. 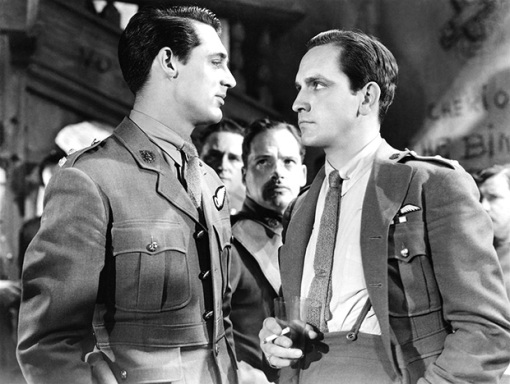 This is a story of one man’s mental breakdown as the full horrors of war become clear.

The men go up in two – man teams, one flying the plane and the other taking photos – and manning the tailgun.

The number of deaths is skilfully shown by an orderly clearing the bed and belongings of the dead officers , one by one, as Jerry looks on.

Jerry gets down every time and is considered a hero, especially after he kills a German flying ace .

Crocker is an expert gunner and his attitude is:

“This is a war. I’m hired to kill the enemy –  everyone I put away means one less to kill me.”

Crocker even shoots down a German who has baled out of his plane and is in his parachute. The men ostracise him for a while.

The plot is all about the physical and mental disintegration of Jerry.

Crocker, though he dislikes Jerry, is aware of what’s happening to him. He persuades the Unit’s commander to give Jerry a furlough in London.

Jerry meets Carole Lombard ( only identified in the credits as ‘the beautiful lady’) at a society party. Their scene together is quite short as she lets Jerry talk about what’s been happening to his unit.

In the end, Jerry just can’t take it any more. Even his heavy drinking doesn’t help. Crocker finds him dead, a suicide. Early the next morning he takes the body out to their plane and flies off.

We see Crocker shooting into the fuselage and the plane goes down, presumably killing Crocker too.

The final scene is a memorial to Jerry, saying he died a hero.

My reaction was disbelief – there was no way Crocker would have killed himself. It was totally out to character.

Well  I was right. On AFI.com  , the ending is described as Crocker riddling the plane with bullets, then ” Jerry is honoured in death,but Crocker’s sacrifice has taken its role. While visitng Jerry’s memorial, he appears downtrodden and is shooed away by passers by..”

The AFI (American Film Institute) state that the film has been released at 68, 72 and 74 minutes.

I guess the print I saw was the shortest version, because I think there may be a few minutes missing at the start of the film. And March’s meeting with Lombard might have been slightly longer.

As for the title, well, it’s catchy for advertising purposes. Both birds of prey.

It’s a well written though thoroughly depressing film! I usually avoid war films , but I’m glad I saw this one. March is superb. He had already won his first Oscar for DR.JEKYLL AND MR. HYDE.

It’s not much of a part for Cary  but it did continue his build up to stardom. 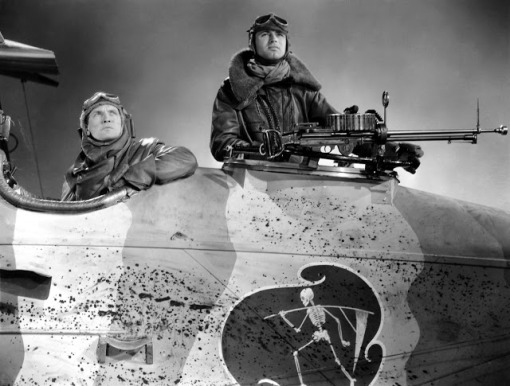 THE EAGLE AND THE HAWK, Fredric March, Cary Grant, 1933

Typical video cover. Cary Grant and Carole Lombard don’t share a scene together in the film, and this doesnt look anything like Carole. 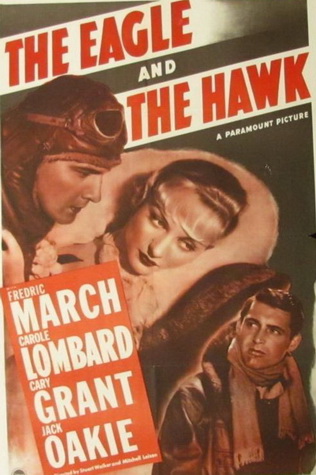 Wonderful how Carole gets second billing, with only one scene in the film!