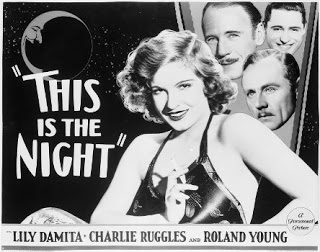 Cary Grant’s first full feature, THIS IS THE NIGHT  is set in Paris and Vienna, and stars Roland Young as the unlikely leading man,Gerald.

Gerald is having an affair with the married Claire (Thelma Todd). Claire’s husband, Stephen (Cary Grant) is an Olympic javelin thrower! Yes, the first appearance in the film has Cary carrying a shoulder bag of javelins! Unfortunately we don’t get to see Cary’s javelin throw!

Thinking that her husband is across the Atlantic attending the 1932 Olympics in Los Angeles, Claire arranges a train trip to Vienna for her and Gerald. But Stephen comes back unexpectedly and finds the train tickets.

Gerald’s friend Bunny (Charlie Ruggles) pretends the tickets are actually for Gerald and his wife (though he isn’t married.)

Stephen is suspicious and says he and Claire will also go to Vienna. Bunny hires Germaine (Lili Damita) to be Gerald’s ‘wife’. Germaine is a poor young Parisian who is desperate for a job.

So that’s the setup, but instead of keeping it light and frothy, Gerald’s character becomes serious as he starts falling for Germaine, and vice versa. In that persona, Roland Young (whom I like a lot) seemed woefully miscast.

Young and Ruggles make a good comedy team, and Thelma Todd played well as the philandering wife who realises she still loves her husband. There’s a running joke in the film, as Thelma’ dresses keep getting accidentally caught  (in a car door, a suitcase lid ) and being ripped off her!

Cary has little to do but look handsome, but he did make an impression with the critics. Variety said: “Looks like Cary Grant is a potential femme rave.!”

I’ve never seen Lili Damita (1904 – 1994)  before and was impressed. A dark haired beauty, she didn’t make many films and more or less retired from the screen when she married Errol Flynn in 1935.

French born, Lili was married briefly to Michael Curtiz in 1925/26, and then for 7 years to Flynn. Her only son, Sean Flynn, disappeared in Cambodia in 1970. 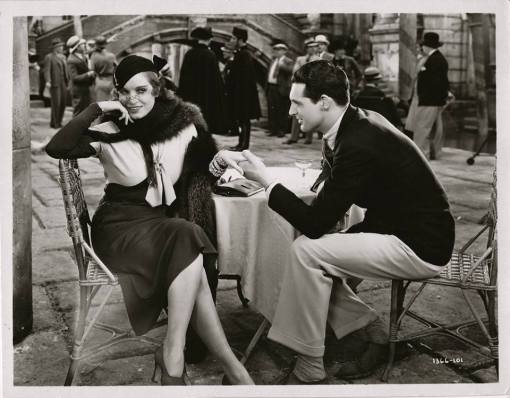