Wouldnt you just like to know what Coca-Cola paid MGM for this all star cast advert. Of course it’s great publicity for DINNER AT EIGHT. Even the film’s director,George Cukor is there.

The ad talks about “the cooling relief from the hot kleig lights” and “the stress and strain of shooting scenes over and over.”

(Hope that’s not a comment on Mr. Cukor’s directing style!) 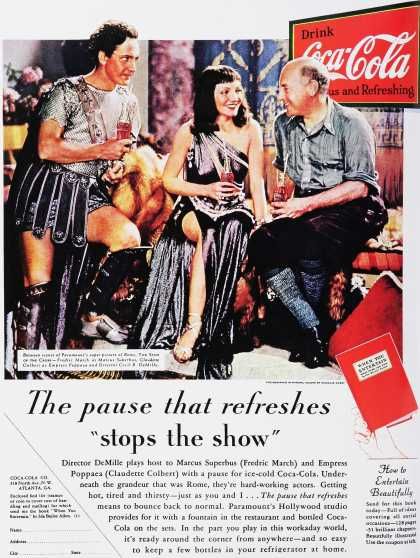 Nice colour shot from SIGN OF THE CROSS, with Fredric March, Claudette Colbert and Cecil B. DeMille.

Paramount apparently has bottled Coca-Cola on the sets.

“The pause that refreshes”  was the recurring theme.

Pepsi is described as bigger and better – for only a nickel. The two companies kept their prices the same, even though Pepsi suggests  it is bigger. 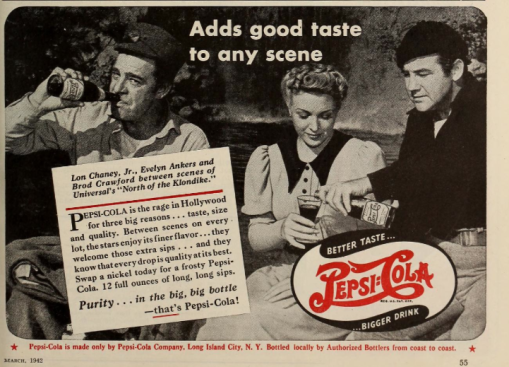 Lon Chaney is guzzling that Pepsi, as Broderick Crawford pours for Evelyn Ankers, in NORTH OF THE KLONDIKE.(1942)

(Crawford was billed as ‘Brod’ Crawford in this film.)

”Pepsi-Cola is the rage of Hollywood!”

RKO’s THREE GUYS AND A GOB, with Lucille Ball and Edmund O’Brien.

Pepsi is different from other cola drinks because of its “finer flavor”.

Jean Harlow is having her Coca-Cola in a glass, not a bottle. No film is being  advertised, just that Jean is a HOWARD HUGHES star. Around the time of “Hell’s Angels”?

”No ‘shadow of a doubt’ about it. Pepsi-Cola goes over big with the big-time stars.” 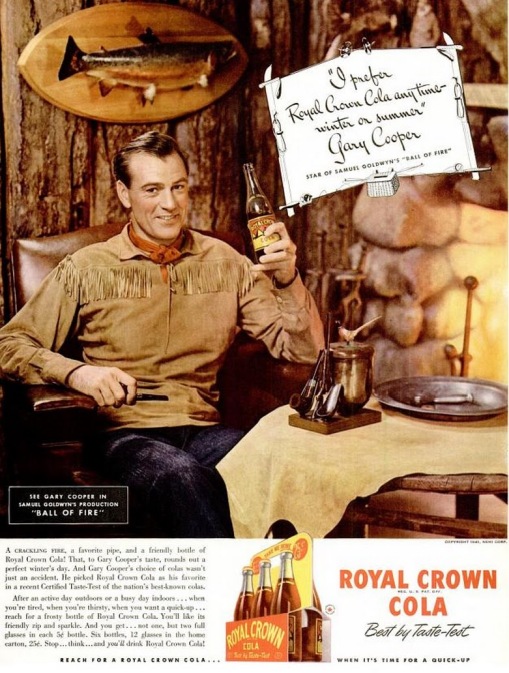 Gary Cooper advertises the little known Royal Crown Cola. Gary’s current film is BALL OF FIRE, but he hasn’t been filmed on the set as most of the other stars were.

Barbara Stanwyck’s latest is MY REPUTATION  and she urges the public to buy more war bonds.

Barbara took the Cola test (oh sure) and, guess what, Royal Crown Cola came out on top!

Joan Crawford is congratulated on her “Mildred Pierce” Oscar by the Bottlers of Royal Crown Cola and they wish her a repeat success with the forthcoming “Humoresque “.

Royal Crown had an amusing  ad (wish I could find a picture) showing prisoners in a jail sentenced to a life of Coke or a Pepsi – they snuck Royal Crown into  their cells!

Royal Crown is still going strong in many countries.