The plot of Paramount’s  STREET OF CHANCE is implausible  but so well told that you overlook the flaws.

BURGESS MEREDITH is ‘Frank Thompson ‘ who is hit on the head by some falling debris from a building site. When he wakes up he wonders why he is in a part of town (New York) which he never frequents. And why do the initials ‘DN’ appear in his hat and cigarette case.

This is the first film to be  based  on a book by CORNELL WOOLRICH (“The Black Curtain”)and if you know this author, you know to expect mystery, suspense  and the very essence of noir nightmares.

’Thompson’ does the natural thing and goes back home, only to find his wife ‘Virginia’ (LOUISE  PLATT) has moved. Given her new address by their landlady, he finds her using her maiden name and claiming he disappeared a year earlier.

They are reconciled quickly, after he says he only remembers leaving for work that morning. A whole year of his life is gone. But he doesn’t see a doctor, which seems the obvious move.

Second  implausability – the next day he goes to the office where he had been employed and is given his job back right away. Hardly any questions asked!

Leaving  work that night, he sees a stranger staring at him – it’s SHELDON LEONARD, so gangsters and hoods spring to mind.

Acting instinctively. Frank  hops a taxi which stops at a red light. Suddenly the Leonard character is pounding on the taxi window- with a gun! But he gets away.

When he feels his wife may be in danger, Frank makes her go to her mother’s, with the quote,

“When a man falls in quicksand, he doesn’t reach up and pull those he loves  down with him.”

He goes back to where he was injured in Tillary street ( great Paramount New York set),  hoping someone  will recognise him. Someone does. It’s half an hour in before we see CLAIRE TREVOR  (‘Ruth Dillon’)who spots him from an upstairs apartment window.

Ruth rushes out, saying, “Danny, you crazy fool. What are you doing in the open street like this?”

Of course, Frank hasn’t a clue who she is or what she’s talking about. And is more than a little embarrassed when she says, “Aren’t you going to kiss me?”

The plot deepens as Frank realises than in this other life he is accused of murder.

Burgess Meredith is such a good actor, when he sees the newspaper clipping that covers the murder, he silently looks at his hands and face in a mirror, obviously thinking, ‘Am I a killer?’

Without revealing his amnesia to Ruth,  Frank tries to find out what has been happening in the past 12 months.

Although only 74 minutes, ‘Street of Chance’ is full of action and has a satisfactory conclusion, with a good twist.  The dialogue doesn’t crackle,  but Jerome Cowan gets a juicy line,

“I think I’ll take a bath and curl up with a nice warm revolver.”

And Sheldon Leonard ‘s character is a cop, not a gangster , a neat twist. 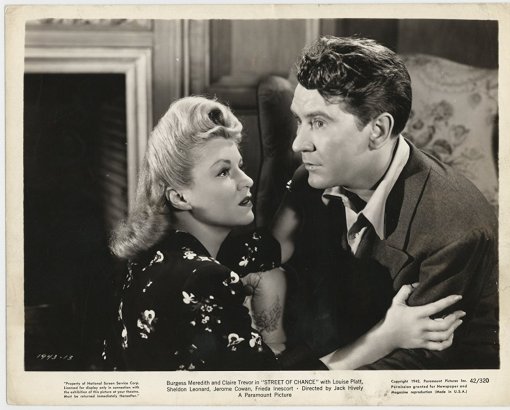 That takes the wind out of her sails.

He attempts to explain the unexplainable,

Another implausibility . Danny turns up out of nowhere and there is no suggestion or discussion on attempts to find out who he was. Or who knows, maybe there are some  scenes missing from the film. I’d have found a flashback interesting when ‘Danny’ first appeared.

Also in the cast and tied up in the murder are FRIEDA INESCOURT and JEROME COWAN.

ADELINE DE WALT REYNOLDS doesn’t speak a word in the film, but plays an important part.

This actress was born during the American Civil War and died aged 98 in 1961.

She graduated with honours in French from Berkeley University at the age of 68!! (And also took acting lessons.)

She was 78 when she made her first film in 1941, COME LIVE WITH ME, playing James  Stewart’s grandmother.

She was the oldest  member of the Screen Actors Guild.

Her last film was THE TEN COMMANDMENTS in 1955. But was still making TV appearances till 1960.

I think we are going  to have to start looking out for Adeline. It’ll be like looking for Bess Flowers. Blink and you may miss Adeline in films like A TREE GROWS IN BROOKLYN, THE CORN IS GREEN, STARS IN MY CROWN, WITNESS TO MURDER 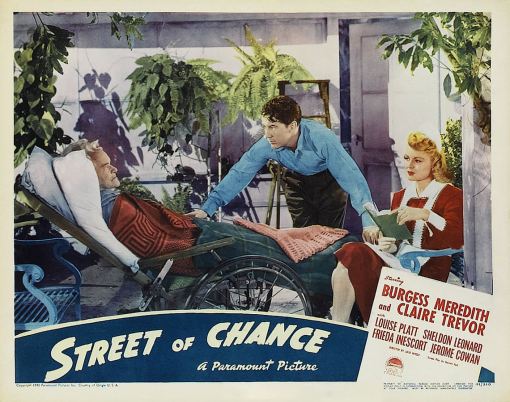 Claire Trevor has been described as a ‘shady lady’ and a ‘femme fatale’ in Street of Chance. She isn’t either. She’s in love with the man she knows as Danny and tries to protect him.

Louise Platt, whom I only  know from STAGECOACH, impressed in the few scenes she was in. She and Claire Trevor ( also in Stagecoach) didn’t have a scene together.

Louise was only in Hollywood for 4 years , and Street of Chance was her final film before returning to the stage.

Claire Trevor was very good, as always. But my highest praise goes to Burgess Meredith who showed just how good an actor he is. He inhabits the character whose life is spinning out of control with such depth and pathos.

This movie has so much to applaud, I’m glad I discovered  it on You Tube, though it badly needs a Blu-ray and dvd release. 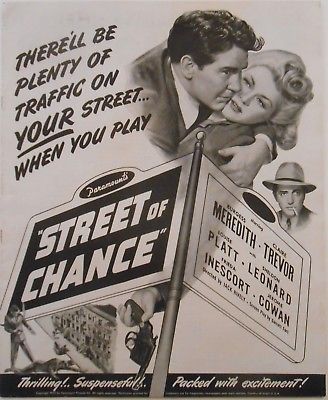 I happened to watch THE CROOKED WAY (1949) shortly after Street Of Chance. The Crooked Way has a similar amnesia theme and stars John  Payne. It made me realise what’s missing in Street  of Chance In order to make it a stand-out Noir is the incredible cinematography of JOHN ALTON who, for me, makes The Crooked Way better than it really is.  His shimmering shadows are so much a part of the drama.

But John Payne, in a way like George Raft, just isn’t a good enough actor to convey the feeling of someone whose world is turned upside down. ( though he did pull it off in 99 RIVER STREET where the main emotion of anger was maybe easier for him to convey.)

Leave it to Burgess Meredith to command the screen. He deserved an Oscar nomination at least.

Lastly, Paramount should have kept the original title. THE BLACK CURTAIN.