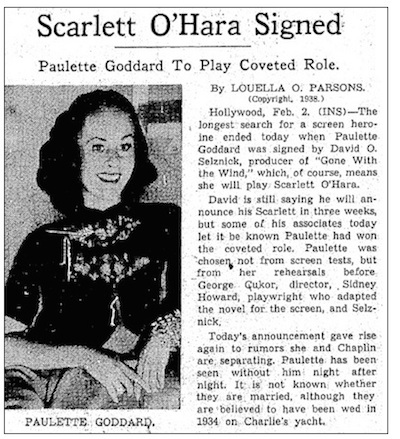 Paulette Goddard was hotly tipped to be Scarlett O’Hara and even given a Technicolor screen test. She was under contract to David O. Selznick and made YOUNG AT HEART for him in 1938.

But, then, as happened  with other Selznick players, she was loaned out to MGM for FINISHING SCHOOL (1938) and THE WOMEN (1939} (which gave Paulette one of her best roles.)

Vivien  Leigh was a latecomer in the race to become Margaret Mitchell’s Southern Belle. And it must have been quite a shock to Paulette when she lost the role.

Whether Paulette’s ongoing relationship with Charlie Chaplin influenced Selznick’s decision is unclear – as Louella says  in her piece, it wasn’t known if Goddard and Chaplin were married. And that was a big deal in 1938.