”It does not matter if you are heavily outnumbered in a fight. Your enemies will wait patiently to attack you one by one, by dancing around in a threatening manner until you have knocked out their predecessors! “

(From “Things you need to know about the movies.”)

We’ve all seen swashbuckler movies where this happens and nobody complains. We know Errol Flynn or Tyrone Power are going to overcome however many baddies are in front of them.

FRED CAVENS (1882- 1962) was the Belgian fencing expert who made all the stars look good, giving them the illusion of expertise.

He taught the heroes and the villains, he arranged sword fights in all sorts of situations – over tables, up and down stairs, hanging from chandeliers, onboard pirate ships.

Cavens had arranged the foil play on  French comedian Max Linder’s THE THREE MUST GET THERES” in 1922.(Linder played ‘Dart-in-again’ !) The film is on Amazon and I look forward to seeing it.

Douglas Fairbanks had found that sword fights were great box-office and he did all his own stunts. He didn’t bother much about orchestrating the fights, but realised the value of Cavens’ work.

For Fairbanks, Cavens worked on DON Q, SON OF ZORRO, THE IRON MASK and THE BLACK PIRATE. 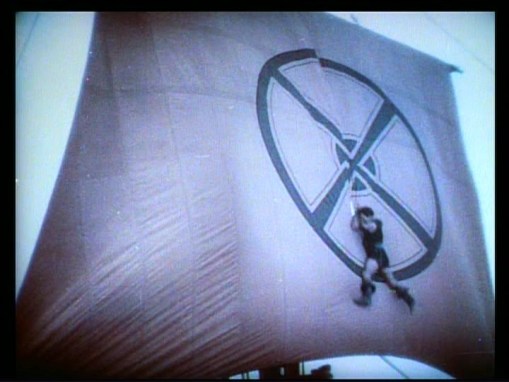 (“The Black Pirate” is famous for that amazing stunt by Fairbanks when he slices down the ship’s sale with his cutlass.)

Love that little car in front of the cinema! 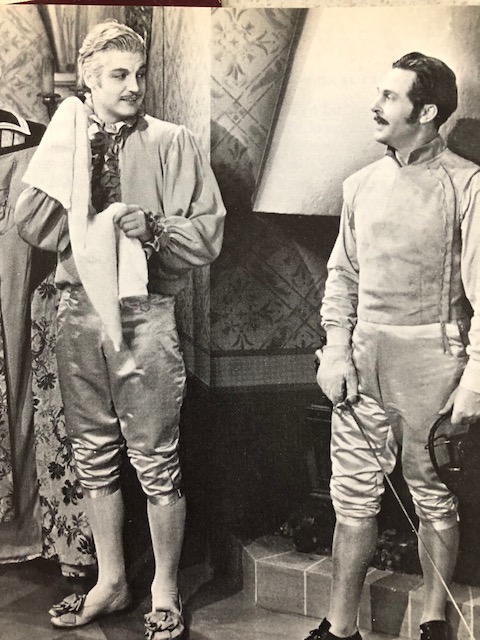 One of Cavens’ on screen appearances in “The  Count of Monte Cristo”. Although of short stature, Cavens  often doubled for the stars. 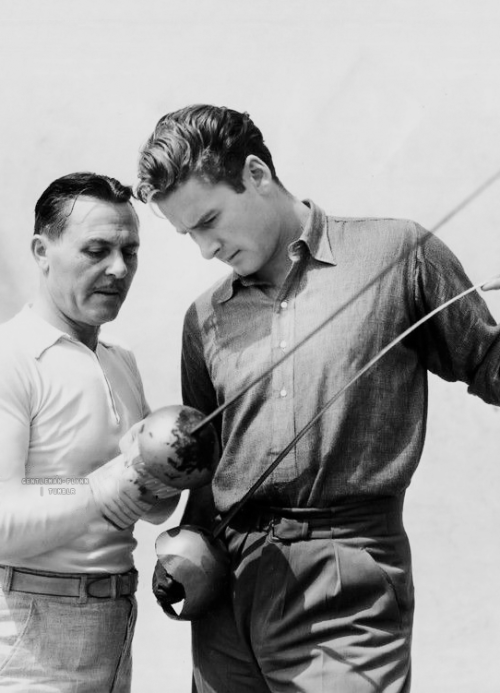 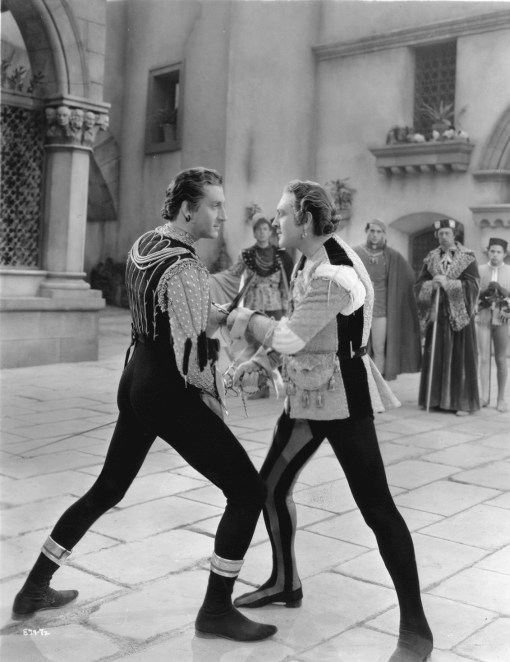 The only time the best swordsman in Hollywood won a duel!

Cavens said Rathbone could have been a competitive fencer. Rathbone  was a trained and enthusiastic amateur fencer. 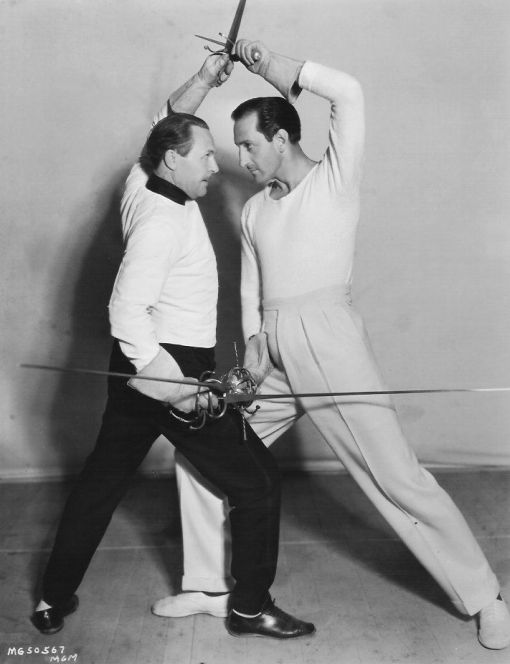 The famous fight scene between Rathbone and Flynn.THE ADVENTURES OF ROBIN HOOD. 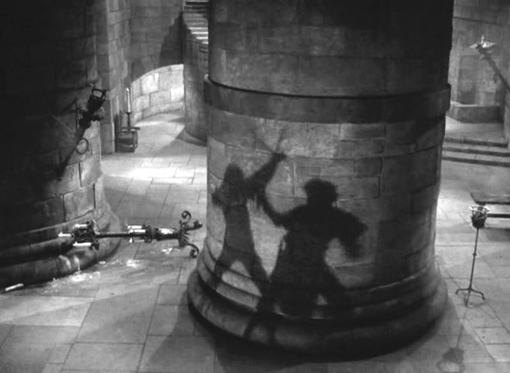 The dancing shadows of Flynn  and Rathbone.

Tyrone Power and guess who in “The Black Swan”! 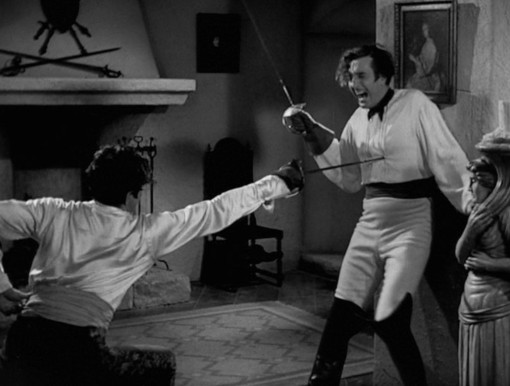 Ah, poor Basil. He bites the dust again. This duel in The Mark of Zorro was considered one of the finest swordplay in Hollywood. Power, in some shots, was doubled by Fred Cavens’ son, Albert.

Fred Cavens (on left) rehearses with his son Albert. “The Mark of Zorro”. 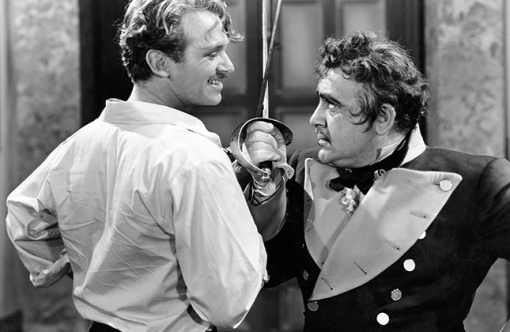 It seemed only natural that Douglas Fairbanks Jr. would  follow in his father’s footsteps. And he did well.

Cavens doubled for Akim Tamiroff in the fight scenes. 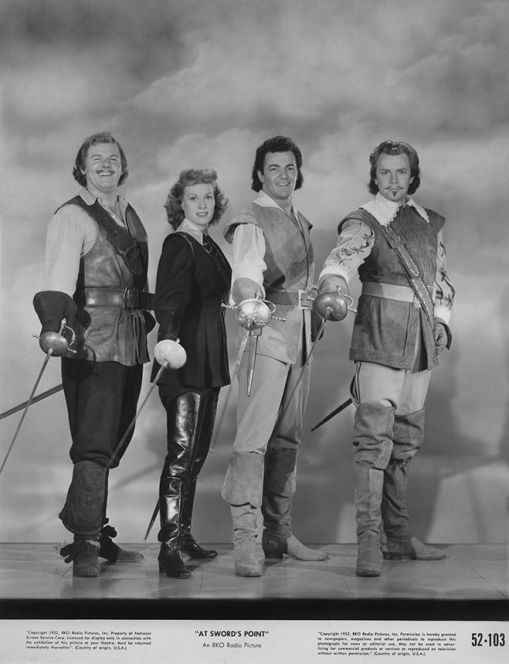 Cornel Wilde qualified for the American fencing team in the 1936 Olympics, but left the team before the olympics. He could use either hand when fencing.

Another shot of Fred Cavens battling Louis Hayward in FORTUNES OF CAPTAIN BLOOD. 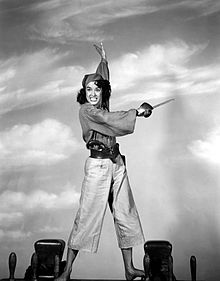 Jean Peters in ANNE OF THE INDIES.

Quote from Albert Cavens: All movements ,instead of  being as small as possible  as in competitive fencing, must be large but nevertheless correct. Magnified is the word.

The routine should contain the most spectacular attacks and parries…..the duel should be a fight and not a fencing exhibition and should disregard at times classically correct guards and lunges.”

Definitions  of ‘Swashbuckler’:  Swash – the noise of a sword striking a buckler (a small round shield)……. A swaggering adventurer …a genre of Hollywood film.

Robert Montgomery ,  who never swashbuckled but was  apparently an excellent fencer.

For the 1936 book, “The fundamentals of Foil Fencing” by Joseph Vince, Cornel Wilde provided the illustrations. I couldn’t find any of them unfortunately. 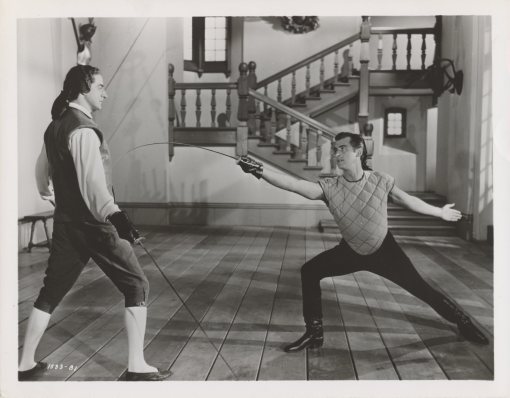 Cavens didn’t work on SCARAMOUCHE. Anyone care to guess who is fencing with Stewart Granger in the above photo!

For a full history of swashbuckling on the screen, Jeffrey Richards’s 1977 book is a must read. 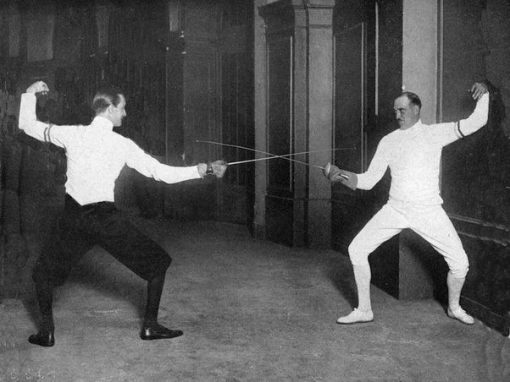