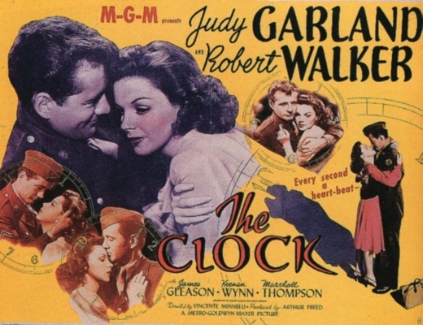 In 1944, Judy Garland began work on her first non-singing role in THE CLOCK. The film would be set in New York but made at the MGM studios at Culver City.

Veteran MGM  director Jack Conway was assigned to the film and started by doing some second unit filming in New York. When he took ill, MGM contract director Fred Zinnemann was assigned to take over.After one month of filming, production was shut down when the studio and Judy were unhappy with Zinnemann’s direction.

Vincente Minnelli, who had made the very successful “Meet Me In St.Louis” the previous year with Judy, took over the shooting. But he did tell producer Arthur Freed that he would only do it if Fred Zinnemann agreed.

The following letter From Zinnemann to Minnelli is on the excellent website  www.starsandletters.blogspot.com

Publicly Zinnemann said “Judy acted in a professional and honourable way. I thought she was doing very well, but she didn’t.”

He also said, “She might have felt insecure working with me…at the time it was quite a blow.”

In contrast, in this letter Zinnemann privately tells Minnelli, “Judy behaved pretty badly in the whole set up – and I have great contempt for the conduct of Arthur Freed.”

He also wishes Minnelli the very best of luck and says he has no hard feelings.

Judy and Vincente Minnelli were married one month after the film’s release in 1945.

A clock was to figure largely in one of Zinnemann’s most iconic films, HIGH NOON. Two of his films won the Best Picture Oscar – FROM HERE TO ETERNITY and A MAN FOR ALL SEASONS.

Along with “High Noon”, my favourite Zinnemann films are THE SEVENTH CROSS, THE SEARCH and ACT OF VIOLENCE. He only made just over 20 films in a 30 year career.

Fred Zinnemann directed shorts for MGM from 1936 to 1942. His first feature was KID GLOVE KILLER in 1942. Followed by EYES IN THE NIGHT and THE SEVENTH CROSS with Spencer Tracy.   Perhaps then understandable that Judy Garland didn’t have confidence in this director who had only done three feature films . Although a good director is capable of tackling any genre.

It’s  not clear what Zinnemann did between 1945 and 1947. He was not happy at MGM and was suspended for refusing assignments.

After the wonderful “Seventh Cross” in 1944, Zinnemann’s next two MGM films in 1947 both starred Jackie ‘Butch’ Jenkins, MY BROTHER TALKS TO HORSES and LITTLE MR. JIM.

Was MGM punishing him, or didn’t they realise what a talent Zinnemann was.

Freed from MGM after making THE SEARCH in Europe, Zinnemann went on to direct “The Men”, “Member of the Wedding”, High Noon”, “From Here to Eternity”, “Oklahoma”.

I re-watched “The Clock” today and found it a pleasant if slight story of a wartime  romance between a soldier ‘Joe’(Robert Walker) on a 48 hour furlough in New York who meets an office worker, ‘Alice’ (Judy Garland) at Penn Station.  They spend the two days together and end up getting married before he has to return to duty.

The  cast is small and includes James and Lucille Gleason, (with Keenan Wynn and Moyna  MacGill in one scene only, though the two actors add a light touch which is welcome). 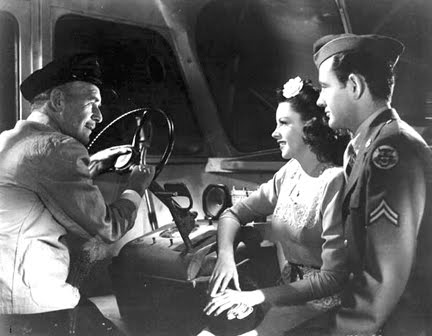 Gleason is ‘Al Henry’ a milk truck driver who gives Judy and Robert a lift. ( they end up doing Gleason’s deliveries for him  after he is injured.) 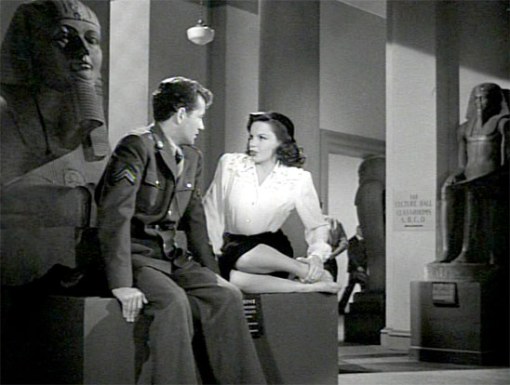 Joe and Alice get to know each other while visiting the Metropolitan Museum Of Art, another great set at MGM.

Unfortunately, any outdoor shots  of the stars in New York were done with obvious back projection. If the film had been made after the war, perhaps The Clock and not “On The Town” would have been one of the first films made on location.

The  clock of the title comes from a scene where Joe asks Alice where they will meet and she says, “Under the clock at the Astor at 7  .” ( I have tried to find a photo of the Hotel Astor Beaux Arts clock, without success. The enormous hotel at Times Square was demolished in 1967.)

Moyna MacGill (Angela Lansbury’s mother)  is so funny in this scene with Keenan Wynn. She doesn’t say a word while eating her meal and trying to ignore the drunk Wynn. Her facial expressions are priceless. 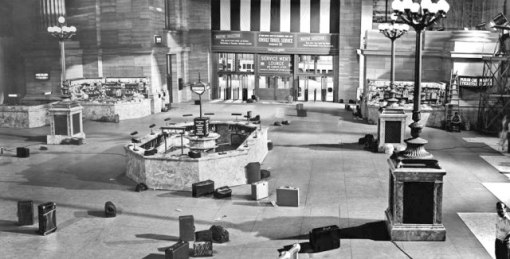 This is the amazing set of Penn Station, recreated on Stage 27 at MGM. 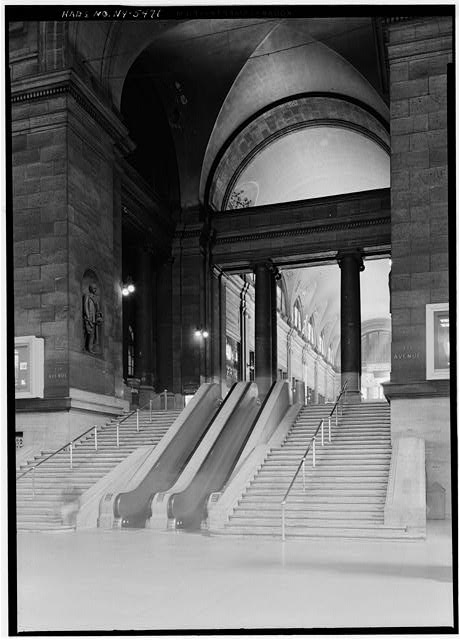 The actual Penn Station in above photo, and the set below. Amazing.

Apparently Vincente Minnelli discarded most of the footage that Zinnemann had filmed and also reworked the script. He also recast James Gleason who replaces Hume Cronyn . And Audrey Totter , as Alice’s friend, was replaced by Ruth Brady.

Although profitable and showing Judy was a very capable actress, MGM quickly got her back into musicals.

One can only wonder how the film would have turned out under Fred Zinnemann’s direction. 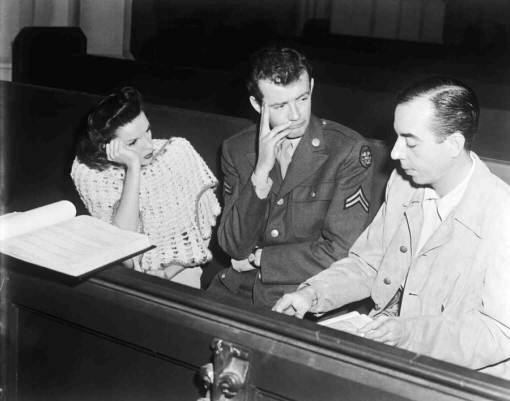 Robert Walker (1918-1951) was the original choice for Judy’s costar in “Meet Me in St. Louis.” . He had married Jennifer Jones in 1939 and they divorced I945 after she became involved with David Selznick. He was subsequently married briefly to John Ford’s daughter, Barbara.

Robert had  mental health and drinking problems. He died aged 32 before completing his role in”My Son John”  in 1952. He had shown in STRANGERS ON A TRAIN that he was capable of much more than the light roles MGM had been giving him. 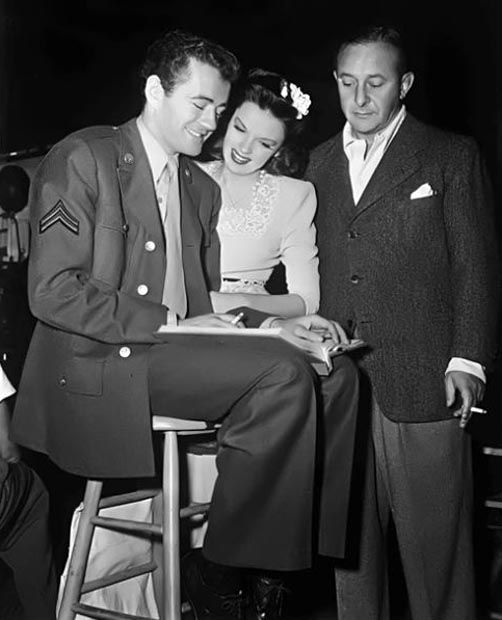 Arthur Freed makes a cameo appearance at the start of the film. (Composer Roger Edens also did a cameo as a piano player.) 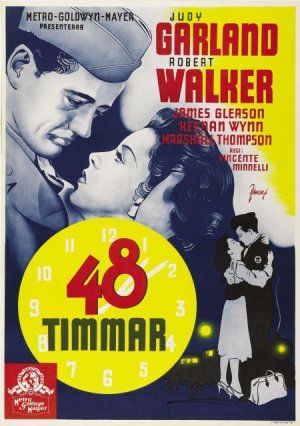