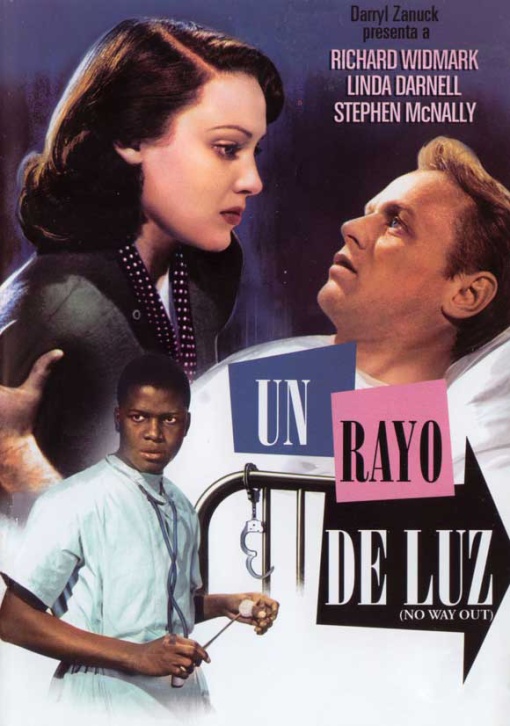 This foreign title for” NO WAY OUT” is “RAY OF LIGHT”, possibly a more positive title for this memorable film which was new to me .

Brooks is mentored by Dr.Wharton (Stephen McNally in a rare good guy role).

Luther is assigned to the hospital’s prison ward where two injured brothers are brought after an attempted robbery. Richard Widmark is Ray and Dick Paxton is Johnny . Both have been shot in the leg by the police.

Despite what looks like minor injuries, Luther realises that Johnny may have a possible brain tumour. He does a spinal tap and Johnny dies during the procedure- all the while Ray is watching from the bed next to him.

Dr. Wharton can’t say, without an autopsy, what the cause of death was. Ray is consumed with hatred for Luther and plans to seek revenge. Even when an autopsy proves the brother did have a tumour, Ray still blames Luther.

Linda Darnell has a pivotal role as Edie, the ex wife of Widmark’s brother.  Edie is the one who is able to change her bigoted views eventually. Surely one of Linda’s  best roles. Edie is from the same slum neighbourhood as Ray. She is a car-hop at a drive-in and is full of bitterness at life in general and her inability to improve her situation.

Both Linda and Richard Widmark should have got Oscar nominations. Richard chews the scenery as only he can.

A fine start to Sidney Poitier’s career as his character tackles the ugly racism of the time.

Ray persuades Edie to help him in his revenge against the doctor whom he believes killed his brother.He plans an attack on the black section of town.

The subsequent battle in the junk yard is dramatically filmed.

Ray corners Luther but Edie prevents him shooting Luther. Ray himself is shot.

As I write this, I’ve just read that Sidney Poitier is 92 today. A fine actor with a landmark list of films.

“THE HATE IS BLIND.”