THE DEATH KISS was made  at Tiffany Pictures, a small production company in business from 1921-32, with its studio on Sunset Boulevard.

Following on from  “The Invisible Woman” which I reviewed recently, The Death Kiss was a lovely surprise and I must thank Mike’s Take on the Movies for introducing me to it. http://www.mikestakeonthemovies.com/the-death-kiss

Star credits on a film can vary and the above picture shows what is an accurate reflection of the film. David Manners is in practically every scene and his character drives the narrative forward. In fact it should read “David Manners in The Death Kiss”.

But of course, studios have to decide what will sell tickets. Bela  Lugosi had been a big hit in DRACULA in 1931 and all advertising for The Death Kiss indicated that Lugosi was the star of the film.

In fact, Bela Lugosi has quite a minor role as the studio manager and was in just a few scenes.

Even Kino  Lorber , the dvd distributor, on their website boosts Lugosi’ s role: “Bela Lugosi stars as the head of a struggling studio.” 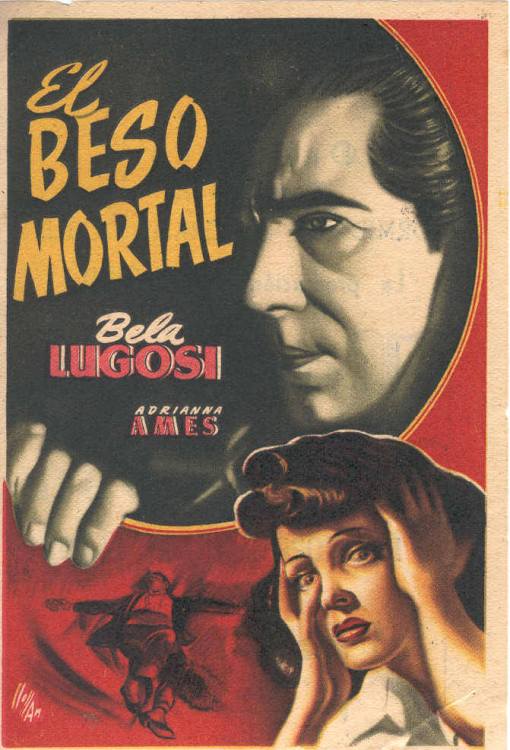 “The Death Kiss” is an enjoyable murder mystery and the scene below starts the film. We think we are watching a scene where a evening-gowned woman walks up to a man coming out of a night club and kisses him. She has previously stepped out of a car, telling the two men inside she will identify the target by kissing him!

Gunshots ring out and the man drops dead. 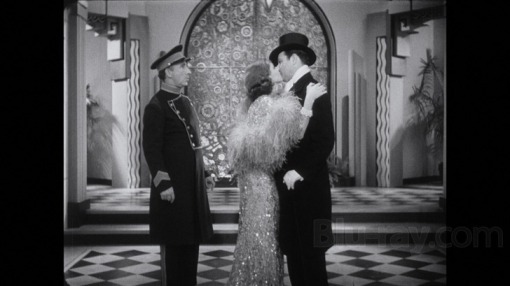 Then, the camera pulls back and it becomes clear we are on a film set. The director (Edward Van Sloan) calls “Cut!” and shouts  to the actor who has just been shot, “When you die this time, let’s have less gymnastics, and don’t spin when you fall.”

The movie being made is called “The Death Kiss”.

Turns out the actor is really dead and the film follows the efforts of studio scenario writer Franklyn Drew (David Manners) to find out who the murderer is. The murdered man wasn’t liked by anyone in the studio so there are plenty of suspects. 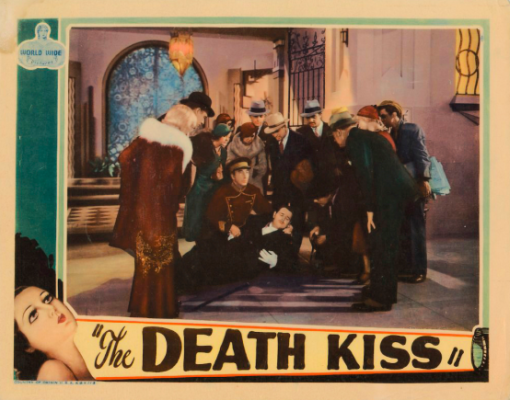 Who substituted a real gun for  the prop one, where is the murder gun – nobody is allowed to leave the set.

David Manners with Adrienne Ames as the star of the ‘film’.  Ames was married to the murdered man and becomes a prime suspect.

Adrienne Ames had little to do in the film. 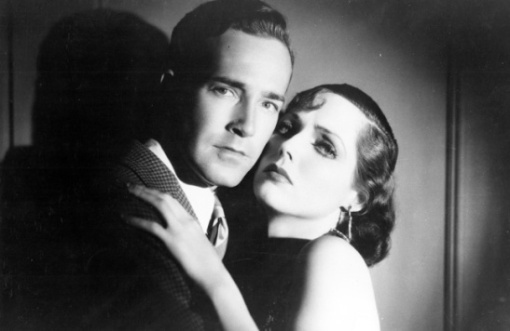 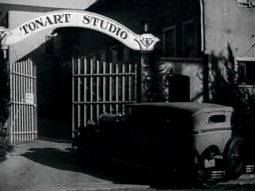 Tonart Studio , the fictional studio in the film.

Conveniently for Death Kiss, most of the story is told on the sound stages of Tiffany Pictures which means we get to see quite a lot of the  studio. 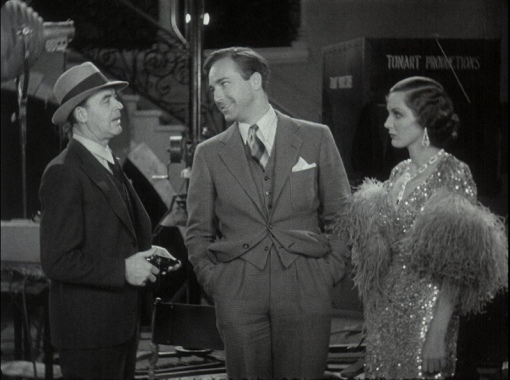 The murder gun is found by Manners, hidden in one of the arc lights.

Manners, as the writer Franklyn Drew,  is always one step ahead of the police, with the help of the studio security guard – played for laughs by Vince Barnett. 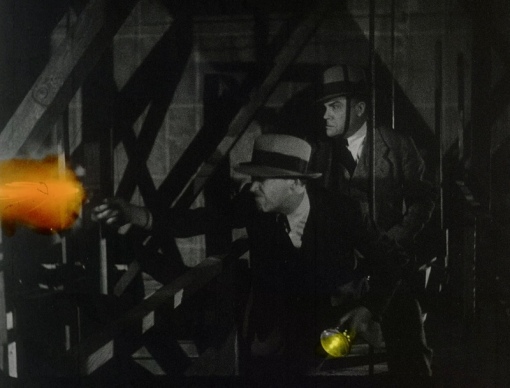 There was some tinting near the end of the film of gun shots and flashlights. Seemed a bit odd.

I love how one review in 1933 said,”Bela Lugosi of “Dracula” fame appears in a murder mystery and is not the guilty man…….no more than this will be revealed in these columns! “

When the murderer is revealed (I guessed!), the studio head says, “Let’s avoid film titles with ‘Death’ in them!” 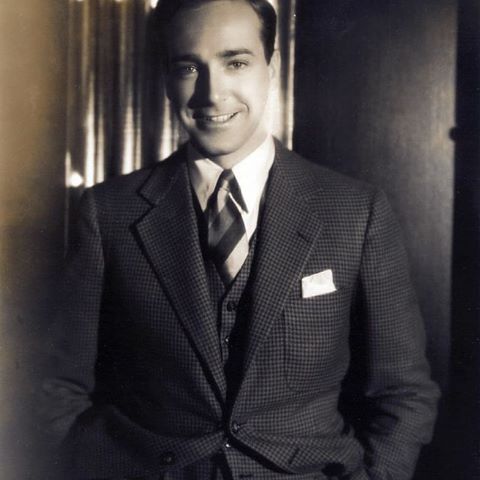 I wonder why Canadian  David Manners (1900-1998) wasn’t snapped up by a major studio.He was handsome, sophisticated, just so darn likeable!

He made 38 films from 1930 to 1936. He reminded me of a young Cary Grant or Joel McCrea. I look forward to catching up on his films, like “Torch Singer” with Claudette Colbert.

Apparently he lost interest in Hollywood and left films in 1936. There is a website, Davidmanners.com and the blogger, John Norris corresponded with David for many years.

On The Death Kiss, David said, “That was one of the things I did strictly for the cash and promptly forgot!” 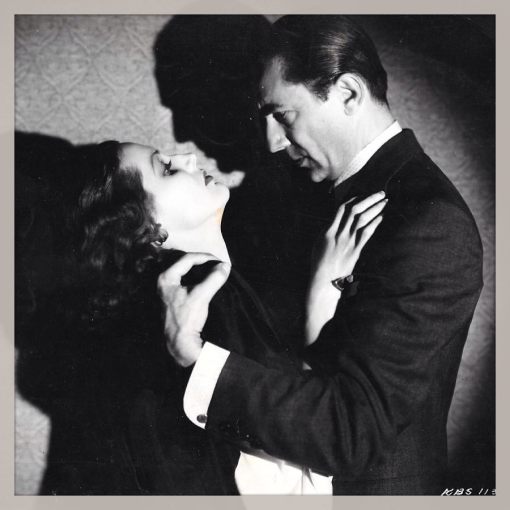 The blatantly false advertising. Bela Lugosi menacing Adrienne Ames – But it never happened in the film. Though Bela’s stare is enough to make you think he’s the murderer!

Why Bela went from Dracula the year before  to the small role in Death Kiss is anyone’s guess.

The Death Kiss can be seen on You Tube. The dvd release on Kino Lorber Classics is ‘a 35mm archival restoration.’ Perhaps it was a poor source print because the audio quality was not great.

Still, good  to have it on dvd – just don’t expect a horror movie! 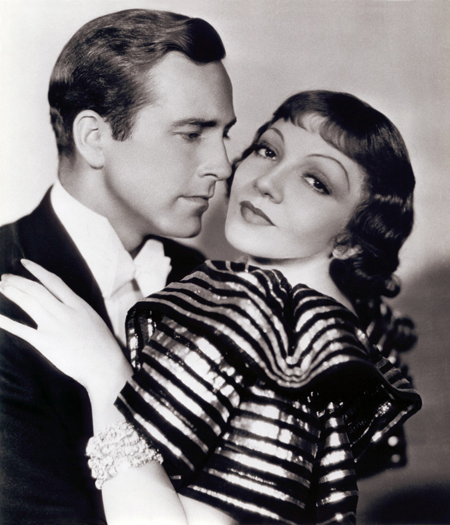