The advent of talking pictures created a huge upheaval in the film industry. Was sound a novelty or would it provide the industry with a much needed stimulant. Regarding American films abroad, the changes wrought by sound would be complex.

It was interesting to read a 1928 piece in which two of the most well known Hollywood producers gave their thoughts on the upcoming year of 1929.

”No one could have predicted what a rage they (talking pictures) would become. In my opinion it will be the same in 1929……”  but Laemmle had reservations.

”Eventually talking  pictures will be restricted to certain types of productions rather than the trend to make all pictures talk.

The silent picture technique is too well established to permit a variation of its form.”

Lasky says: “It is obvious that the talking picture has a definite place in the film scheme. But this does not mean that the silent picture is doomed.

On the contrary, it will remain the backbone of the industry’s commercial security…….there will be only a few limited stories whose true medium is 100% dialogue.

Those companies will prosper most which understand best how to use sound .”

I suppose it’s not surprising that such a major shift in technology involving not only the studios but also the cinema  chains would be a frightening prospect for studio owners who had only known silent picture making and could only guess at the cost of converting to sound.

From the moment the public first heard Al Jolson, the demise of  silents became inevitable. “The Jazz Singer” In 1927, even though it only used limited dialogue, was the first step in the commercialisation of sound films.

Though  Louella Parsons didn’t see it that way. On the  Jazz Singer”, she proclaimed: “ I have no fear that the screeching sound film will ever disturb our theatres.”

Considering that it was Warner Brothers who made “The Jazz Singer”, it’s surprising to read that only a year earlier , in 1926, Jack Warner was quoted as saying, “Talking pictures will never be viable!”

During that transition period of 1928/1929, the studios shifted gears so quickly that from 220 silent releases in 1928, the number of silent films dropped to only 38 in 1929. The camera may have been stuck in a soundproof booth and the films may have become studio bound (with early microphones unsuitable for location filming), but the public knew what they wanted.

Initially Warner Bros.  used the Vitaphone system of sounds being recorded on a disc then synchronised with the cinema projector. But Fox introduced  Movietone , a sound on film process which became the standard.

As more and more cinemas were wired for sound, talkies were taking over and the days of the silent film accompanists playing in cinemas were over.

And a new film genre was created – the musical. Broadway was raided both for material and performers. One film SHOW GIRL IN HOLLYWOOD (1930), starring Alice White and Blanche Sweet, was one of the first to have a plot centred around the making of movies. We see the new sound stages with heavily encased cameras  and off camera orchestra and microphones. Some good dialogue too:

Alice White: “I’ve come all the way from New York.”

Many directors  and stars made the transition from silent to sound, but some didn’t – Pickford,Fairbanks,Keaton, Lloyd,Chaplin , all made far fewer films  while Garbo, Colman, Cooper, Crawford, the Barrymores  continued to draw the crowds.

Was Hitchcock tongue in cheek when he said: “The only thing wrong with the silent picture was that mouths opened and no sound came out.”

Such an amazing time in Hollywood history. I could see a great TV mini-series about that transitional period from 1927 to 1931. 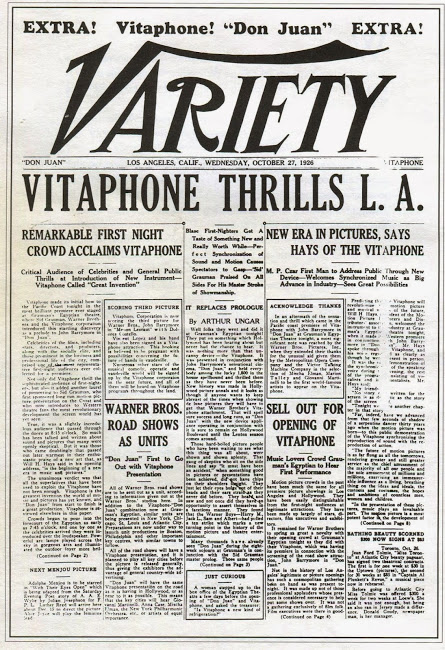 One slogan said, “At Last!  Pictures that talk like living people!” 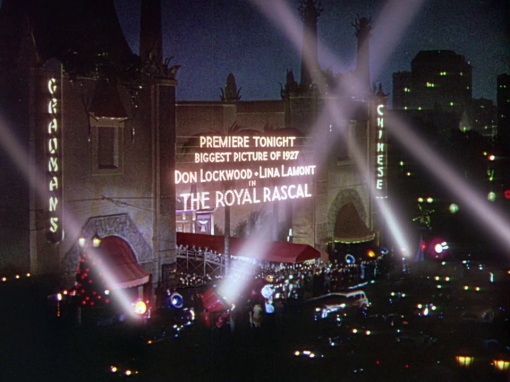