Good to see Robert  Wise’s THE SET UP on blu-ray. 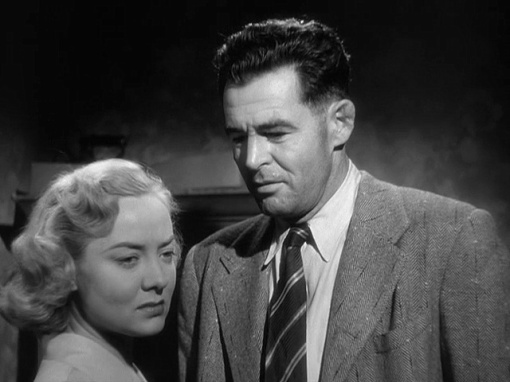 Of course, Robert Ryan (as Stoker) and Audrey Totter ( as his wife Julie) are terrific ( and it is so nice to have Audrey in one of her few sympathetic roles, on loan from MGM).
And the studio set of Paradise City is excellent. Great too to have the plot play out in the time frame of the film – 72 minutes, from the first time  we see the clock showing 9.05pm and the final shot showing 10.15pm.

From their motel room, ‘Julie’ can see, across the street, where the fight will take place. We can tell she has been through it many times before. Stoker likes to know she’ll be at the fight, but this time she just can’t put herself through it, knowing he will probably lose and get hurt.

Main Street at night, neon lights, shady, seamy. Great set by RKO production designer Albert D’Agostino. It would be fascinating to see how this set was constructed, presumably on the backlot.

Stoker can’t see he needs to stop fighting. He’s washed up but doesn’t know it.He’s 35 and he hears one of the crowd shouting, “Where’s your wheelchair,old man!”

He still thinks he has a chance at the big time and can take the young fighter he is up against. But not knowing he’s being set up to throw the fight .

The actual arena used for the fight sequences was the Hollywood  Legion Stadium. Robert Ryan was a skilled amateur boxer.

The actual fight takes up 20 minutes of screen time, a bit too long for me. I don’t think we needed to see the entire fight. And would boxers in a real match trade so many punches I wonder. But the entire 20 minutes is a perfect example of terrific editing by Roland Gross ( who also edited Deadline and Dawn and On Dangerous Ground.)

I’d have preferred a few more scenes with Ryan and Totter.

Wise captures the bloodthirsty crowd, from the blind man whose pal is describing the fight ( and calls out “Close the other one” when Stoker’s eye is damaged ); the woman who is shouting “Kill him!” while her husband looks embarrassed;  to the chap who is listening to a baseball game on his radio – and the younger man  who seems to feel every blow!

I like scripts that are so well written, you can literally read between the lines. One can see Stoker and Julie moving from small town to small town, never having a settled home, Stoker unaware ( or not willing to face) the toll their life is having on his wife – and himself.

The script is by Art Cohn and according to IMDB, this was his first in Hollywood. He also scripted The Tall Target and about a dozen other films. He died in the same 1958 plane crash that killed Mike  Todd, whose biography he was writing. 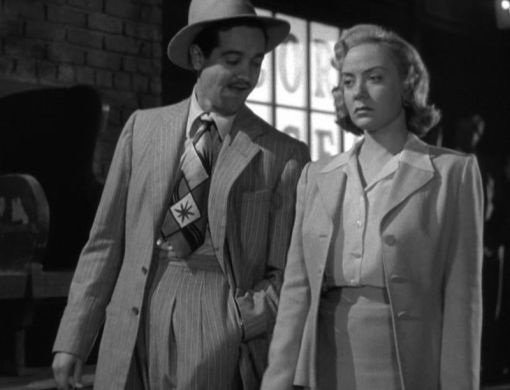 Nice to see Tommy Noonan In an early role ( with a moustache) , as he tries to pick up Audrey who is wandering around Main Street while waiting for Robert Ryan to return to their hotel room after the fight.

The  twosome who supposedly work for Stoker, whilst taking money for the fight fix without telling the fighter until it’s too late. 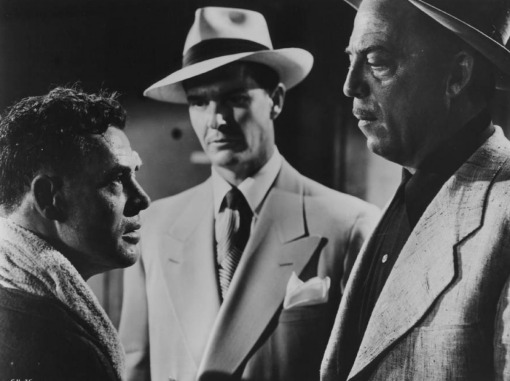 Alan Baxter as racketeer ‘Little Boy’ only  has a few lines  but is suitably menacing as he says, ”I paid for something  tonight and I didn’t get it.”

Stoker wouldn’t throw the fight and pays the price.

Is the ending too pat.? Stoker immediately recognising that he won’t fight again after Little Boy’s men stomp on his hand, saying to a tearful Julie, “They busted it for good, Julie. I can’t fight no more….I won tonight, I won.”

And Julie responds, “We both won tonight.” 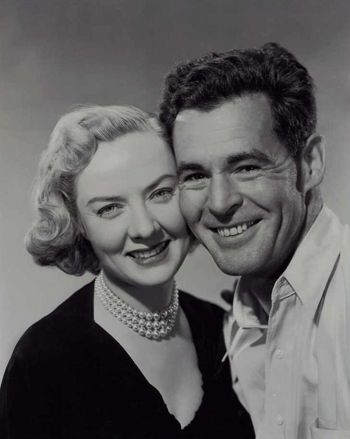 Great advertising for the film.