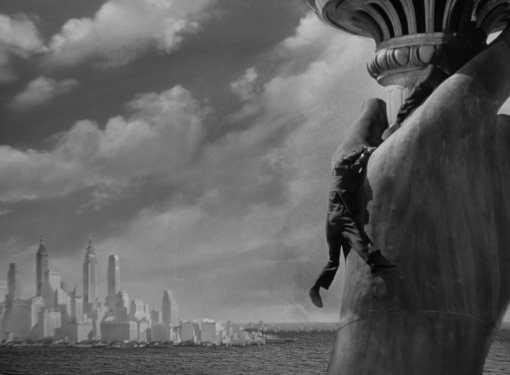 Today NORMAN LLOYD, born on the 8th of November, 1914, is 105 years old. He will forever be remembered for his very first film, SABOTEUR (1942) . Think Statue of Liberty, jacket shoulder seams…..!

A brilliant raconteur, with a wonderful memory, Norman has been interviewed many times about his life and career. I listened to him describe that final scene in “Saboteur” from an interview he did 20 years ago on EmmyTVlegends.org

“As the villain, I am being chased down to the bottom of Manhattan island which in those days was called the Battery…….he goes into the Statue and up to the top where he has a scene with Priscilla Lane and then he sees the police and FBI…..he sees them coming in from the crown of the Statue…….he gets onto the torch which has a railing around it, and Bob Cummings comes out – Bob makes a gesture at me with his gun, frightens me and I go backwards over the railing. 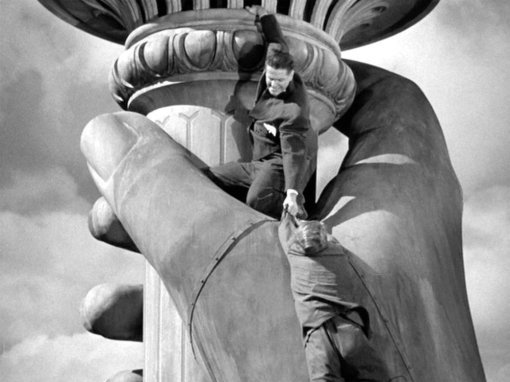 “This was a stunt by Davie Sharp – he did this fall, free falling through the air and caught between the hand’s thumb and forefinger – and done without a net.

The hand and torch were built to scale – exactly like the real Statue. Bob Cummings comes along the finger and grabs my sleeve…..Hitchcock keeps cutting to the shoulder seams -you see the seam begin to go. Bob Cummings is left with nothing but a sleeve!

At the premiere, writer Ben Hecht remarked, ‘He should have had a better tailor!”

They run that scene every day on the Universal tours. It was a memorable shot.”

Norman also appeared in Hitchcock’s SPELLBOUND (1945), as one of Ingrid Bergman’s  patients. Norman recalled that he got the finest piece of direction ever in a scene where Hitchcock tells him, “In this scene you’re supposed to sweat.  Start sweating!” 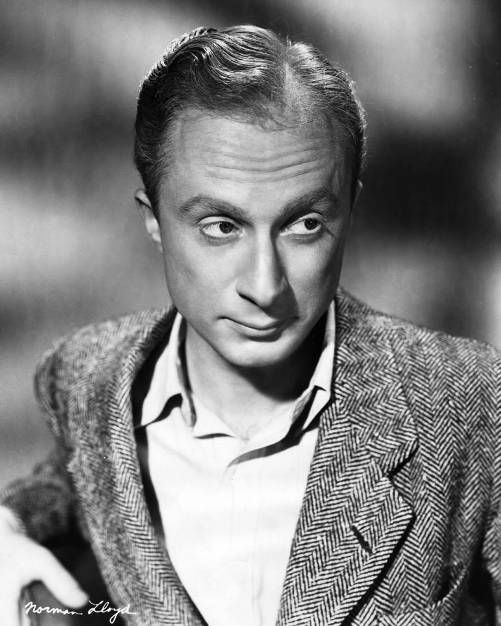 Norman was a charter member of Orson Welles’ Mercury Theatre and it was producer John Houseman who recommended Norman to Alfred Hitchcock for the part of the spy in “Saboteur”.

Active on the stage and television as well as films, Norman became a director/ producer on “Alfred Hitchcock Presents” in 1957.

Norman loved playing tennis and was still playing up until 2015. His tennis partners included Charlie Chaplin.

You Tube is a wonderful source of interviews with this fine performer.

The last one I watched was from 2017 when he attended a showing of Hitchcock’s JAMAICA INN. Even then he spoke well, saying “I have never seen Jamaica Inn. I know it was the last picture Mr. Hitchcock made before leaving England…..I think Charles Laughton had genius.”

What can I say. This man remembers seeing the original Broadway production of SHOW BOAT in  1927.