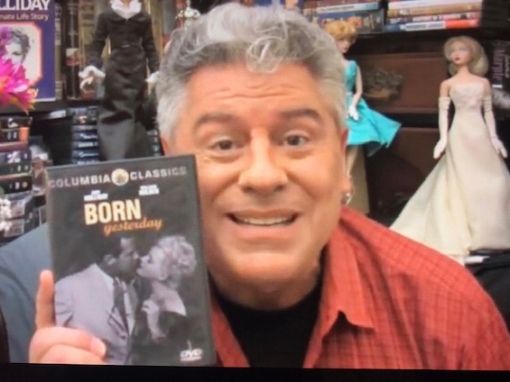 If you haven’t seen Steve Hayes’ movie reviews on You Tube, you are missing  a real treat. Steve has a warm, bubbly personality with an encyclopaedic knowledge of vintage Hollywood. And an enthusiasm for his subject which is infectious.

With a background in acting and standup comedy, and a gift of mimicry, he backs up each review with anecdotes about the stars, directors and the shooting of each film.

His reviews run up to 10 minutes and he doesn’t miss a beat as he talks about the plot, the cast, the background to the film , whilst great film clips are shown. Steve himself came up with the title, TIRED OLD QUEEN AT THE MOVIES. (TOQ for short.)

PRIDE AND PREJUDICE: “Edna May Oliver has a face like the back of beyond!”

DOUBLE INDEMNITY: “The ugliest wig in the history of movies – we hired Barbara Stanwyck for this film – we got Prince Valiant!”

”Seeing it on the big screen drove me crazy. It’s  unbelievably beautiful, with that rich Bernard Hermann score swirling around you. Fabulous!”

Patricia Collinge, ‘Shadow of a Doubt’. 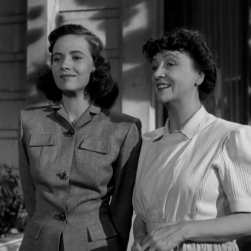 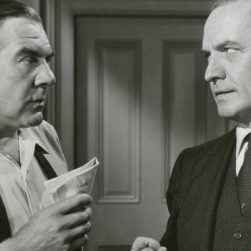 Steve moved to New York in 1976 and remembers walking around his neighbourhood and seeing the Thalia Theatre with a double bill of LAURA and ALL ABOUT  EVE – “I stayed all day! It never occurred to me there were actual theatres that did nothing but screen the classics.

When I first came to New York in the 1970s, so many of the classic movie stars I’d idolized lived here and you could spot them around town. The first star I ever saw was Ingrid Bergman walking ahead of me on Madison Avenue. I recognised her from the back. I ran up, gushed a bit and she was very gracious.”

As Steve explained to me, “I usually watch whatever movie I’m talking about the week before unless I’ve seen them so often, it doesnt matter.

The challenge for me is to do them off the top of my head from the vast storage unit in my poor brain of what my mother used to refer to as ‘useless Hollywood knowledge!’

I work with a team of 5 incredible colleagues. We shoot two takes for each movie. In case I may  have missed something – which I quite often do – like missing something  integral to the film.  (All done in Steve’s New York apartment which he refers to as ‘Thornfield Manor ‘  from JANE EYRE)

We shoot about 9 episodes at a time, then run one a month.”

Steve’s prized possession is an autographed copy of Robert Osborne’s “Pictorial  History of the Academy Awards” . Steve told me – “I’ve had it by my bed since 1969. Robert Osborne signed it for me when a I appeared on the 20th anniversary of Turner Classic Movies and introduced the film THEM with him.”

Steve commented, “I watch all kinds of films, lesser known, as well as bonafide classics. Like all films, some are better than others, it’s all a question of personal taste.

There are a lot of films I love that are put down as failures for one reason or another. I make it a point not to criticise the films I talk about on TOQ at the Movies.”

When I asked Steve if he was a collector, his answer was clear and precise!

“My apartment is ALL memorabilia. Film biographies of stars, directors, producers, some critics; autographed photos, posters, signed volumes…….some of my favourite things are ; a signed first edition of the screenplay of ALL ABOUT EVE, signed to me by Joseph L. Mankiewicz  ;  a first edition of ‘The Name Above the Title’ signed by Frank Capra;   a program from the New York premiere of “Gone With The Wind”;   a signed copy of ‘Memo From David O. Selznick’, by Kay Brown, his right hand assistant/girl Friday who got him to buy “Gone With The Wind”;

A letter to me from Bette Davis;  signed photos to me of personal favourites, Gene Tierney, Barbara Stanwyck, Marsha Hunt and my favourite,Susan Hayward.” 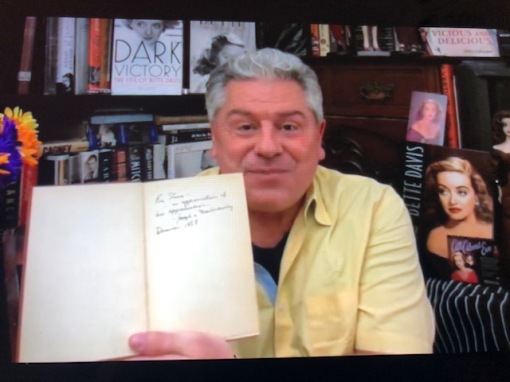 Steve with his All About  Eve script signed by Joseph Mankewicz. 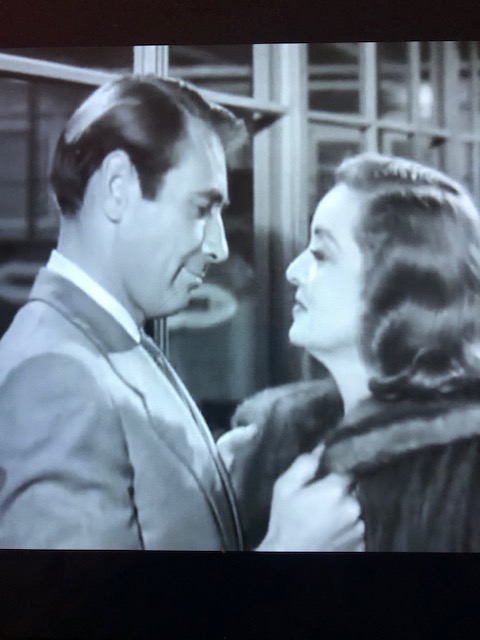 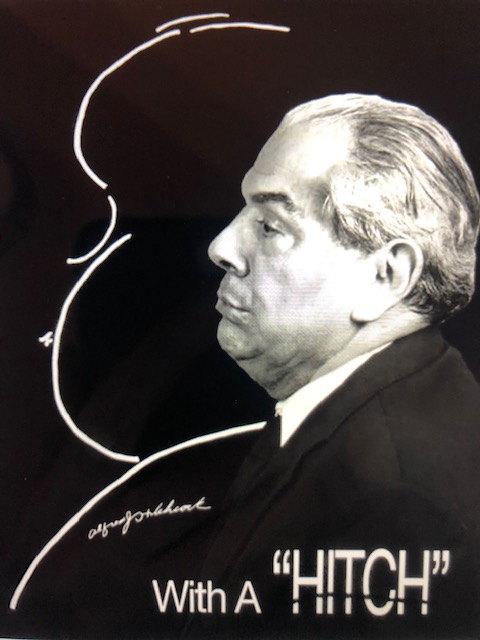 STEVE HAYES: WITH A HITCH. at the Pangea

Steve describes his latest stage show – “It’s  a one person show in which I play Alfred Hitchcock. I have him talk about his life, his work, load it with anecdotes and try to make the audience feel as if he was sitting in their living room conducting an interview.

It’s not scripted, I improvise the whole thing  as I go along.I’ve been an enormous Hitchcock fan since childhood and stored up a lot of knowledge over the years, so I simply try and relax and rely on that.”

”I‘ve been a comedian for many years and try to keep it as informative  and at the same time light and funny as I can…It’s challenging and enormous fun. I’m hoping to tour with it.” 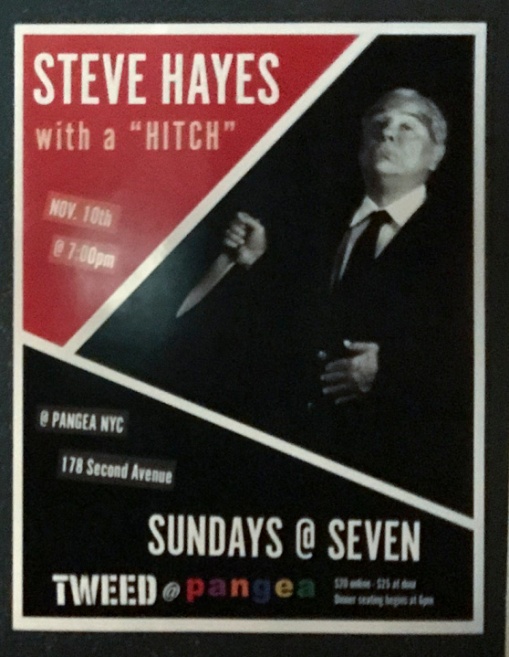 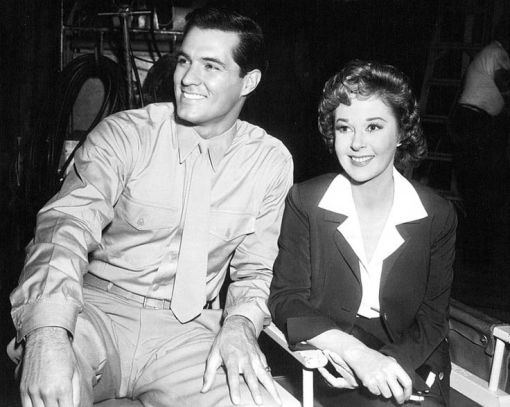 Ten years ago, Steve’s first review was of DEMETRIOUS AND THE GLADIATORS (he’s a big fan of Susan Hayward) and ten years later, he chose BACK STREET – he described the ending as ‘ a melodramatic, five hankie climax!’

And I like Steve’s  take on another melodrama,IMITATION OF LIFE:

“I only like the plot with Susan Kohner and Juanita Moore. Lana Turner and Sandra Dee are too plastic to be believed.”

It’s a genuine pleasure to join the thousands of  subscribers to Steve’s You Tube channel.
Here’s a fan who knows how to talk about films he likes to the rest of us fans , and makes you feel right at home at Thornfield Manor!  And don’t miss his Bette Davis impersonation! So do visit Steve on You  Tube at

Lots of Steve’s reviews can be viewed .

And as one commentator said, “There’s nothing tired about   Steve Hayes. His enthusiasm is catching!”

Steve, many many thanks for taking the time to answer all my questions. If I ever get back to New York, can I come visit!