Highest selling item was a test wand used by  Billie Burke as the Good Witch, Glinda  in THE WIZARD OF OZ. It sold for £304,327!

A handwritten letter from Carole Lombard to Pandro Berman (head of RKO)  went for £533. From the letter (sent  December 28, 1939) , it seems that Pandro Berman had sent Carole a gift of brandy. The letter is signed “Carole and  Clark.)

The lot included a 1942 telegram from Pandro Berman to Corporal Clark Gable who was attending Officers Candidate school in Miami Beach.

A water colour painting by Katharine Hepburn sold for £19,073.

An Emerald City citizen’s coat from THE WIZARD OF OZ made £9565. (Design by Adrian.)

A portrait of Ginger Rogers ( signed by her to Pandro Berman) sold for £872.

A hand painted promotional display for CASABLANCA sold for £9090.

Marion Davies was effusive in her signed photo to Louella Parsons, describing Louella as “the greatest friend I have  ever had.” (£436.)

A concept painting of the Vandamm house atop Mount Rushmore in NORTH BY NORTHWEST, designed at MGM in the style of Frank Lloyd Wright. (The house was a matte painting , with the interiors in the studio, but it’s still an iconic image.) 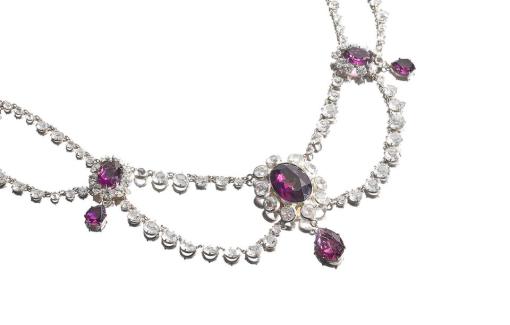 A necklace worn by Vivien   Leigh in GONE WITH THE WIND made £23,828. Centred with amethysts, the necklace was designed by Joseff/Hollywood.

Joan Crawford and Norma Shearer sent signed letters to fans regarding the casting of Scarlett O’Hara. Both gave reasons why they would not be playing the role!

Joan said she’d like to play Scarlett but….”it will be impossible for me to do it. The picture rights are owned by a studio where  I am not under contract, and my own studio can not lend me for the part.”

Norma Shearer, who has been announced as a possible Scarlett, let herself off the hook, pleading Scarlett’s character wasn’t a suitable role for her!    “I felt I had been associated with such idealistic characters in the past few years, that to play Scarlett whole -heartedly might be offensive and leave an unpleasant impression on the minds of the public.”

Also up for auction but not sold was Margaret Mitchell’s signed contract, selling the film rights OF GONE WITH THE WIND TO David Selznick. ( if it was sold, it’s not showing on the Bonhams site.)

According to the auction details, Leslie Howard’s contract for GONE WITH THE WIND, shows that he was to be paid $7500 per  week, more than Gable, De Havilland and Leigh combined!  ( for some reason, Selznick wanted Howard badly.)