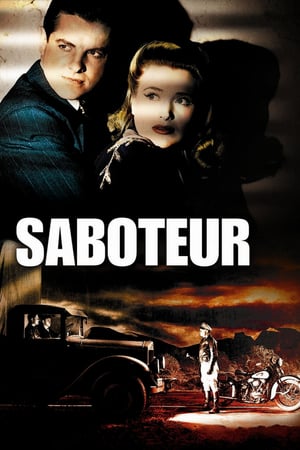 Yes, it’s Hitchcock, his fifth Hollywood film and yes, the Hitchcock touches abound, but SABOTEUR is perhaps the perfect example of how Hitchcock relied on star power.
Without the likes of Ingrid Bergman or Cary Grant, Saboteur doesnt reach the heights of the Master’s best thrillers.

In his memorable interviews with Francois Truffaut, Hitchcock admitted the leading players were not his choice. He described Robert Cummings as “belonging to the light comedian area of acting”, and of Priscilla Lane, he merely said, “she was not a Hitchcock leading woman.”

If it is true that Hitchcock wanted Gary Cooper and Barbara Stanwyck for the leads, that would certainly have made a difference. There is just no chemistry between Robert Cummings and Priscilla Lane.

Also, he wanted Harry Carey as the villain and didn’t seem to think much of Otto Kruger who took the role.

And maybe it is as simple as that – Cummings and Lane couldn’t match teams like Donat and Carroll or Olivier  and Fontaine,

A plot with quite a few similarities to The 39 Steps and North By Northwest, but Saboteur is lesser Hitchcock. Of course the film has lots of memorable Hitchcock scenes, and yet, unlike other Hitch favourites, it seemed  too long at 1hr.50mins, even  though the script writers were stellar –  Joan Harrison, Dorothy Parker, Peter Viertel. 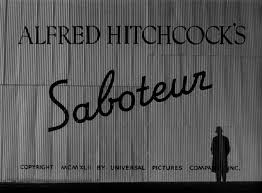 The opening titles of Saboteur features a shadowy figure walking slowly towards the screen -reminiscent of the opening of Double Indemnity, but not nearly as effective. 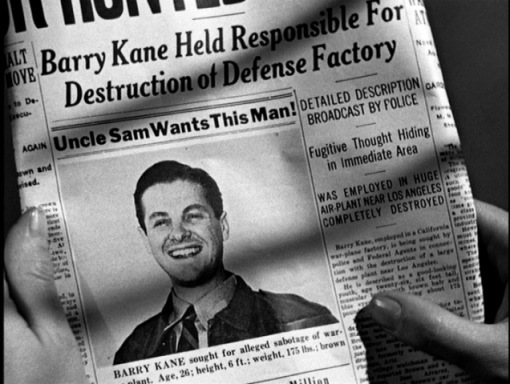 Robert Cummings, as Barry Kane, goes on the run to try and clear his name after an explosion in the aircraft factory where he works .

As does Robert Donat  in The  39 Steps ( London to the Scottish  highlands) and Cary Grant in North by Northwest (New York to Mount Rushmore), Cummings crisscrosses America, from Los Angeles to New York -meeting interesting people on the way!

Hitch likes to cover a lot of territory! 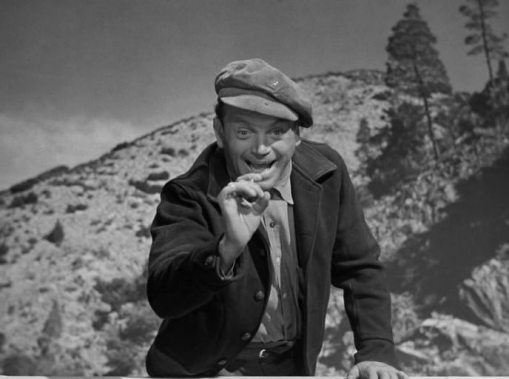 Bringing a touch of light relief, Murray Alper made the most of his brief scenes as the truck driver who gives Cummings  a lift.

In the scene above, he has just witnessed Cummings (ie a very good stuntman) leap off the bridge into the river to escape the police . Alper doesn’t know what his story is,  but he indicates how he feels about the escape. 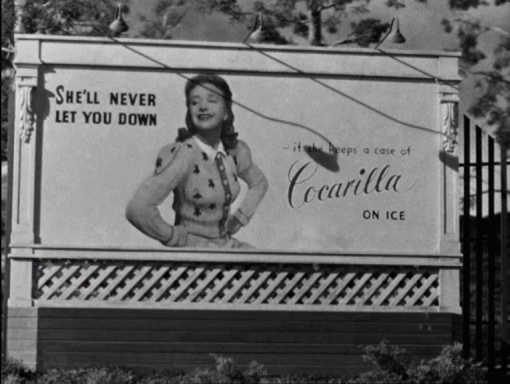 Priscilla Lane’s character is  a model , and from time to time, we see pictures of her on billboards with not so subtle messages. 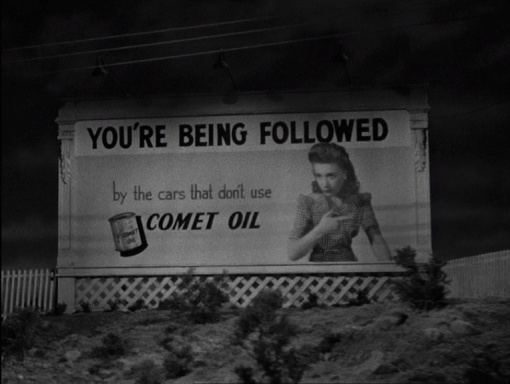 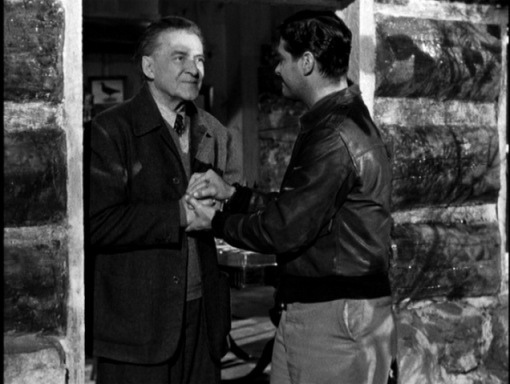 One of the few quiet scenes in the film, when  Cummings finds himself at an isolated cottage where a blind man lives with his dog. Played by Vaughan Glaser, the man – somehow! – knows Cummings needs help and when his niece (Priscilla Lane) arrives, persuades her to help the fugitive.

Another Hitchcock touch are the circus troupe who end up helping Cummings and Lane – the bearded lady, the Siamese twins, the midget.

Crusty old Clem Bevans as a spy? That’s maybe miscasting! Still, I’d have welcomed more scenes with Clem. Alan Baxter was convincing as one of the conspirators. 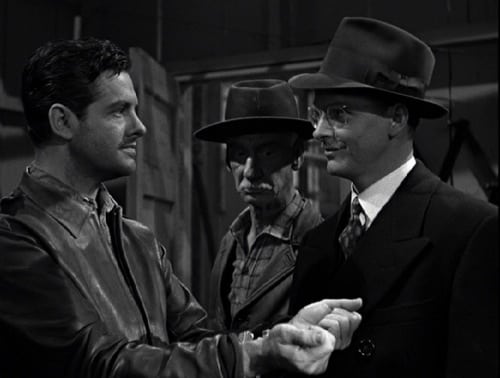 One escape too many? Or very inefficient spies! I counted at least 5 successful escapes by the Cummings  character. 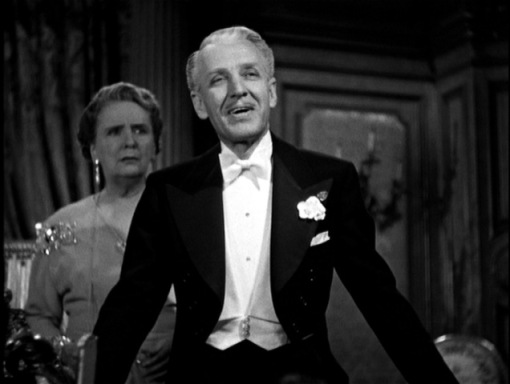 The ever smiling Otto Kruger as the head of the fifth columnists, aided by society lady, Alma Kruger (no relation.)

Despite Hitchcock’s reservations, Otto Kruger was, for me, a perfect villain- suave , urbane and that constant smile! 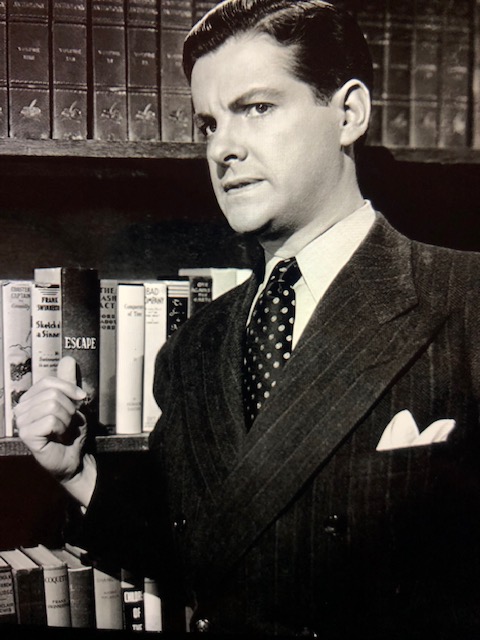 Oh, this is too painful. Nobody notices what he is doing? (As he points to the book title and looks intently at Priscilla Lane!) 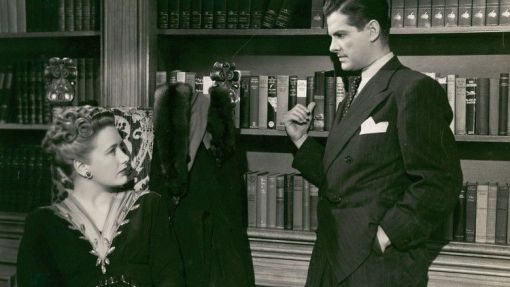 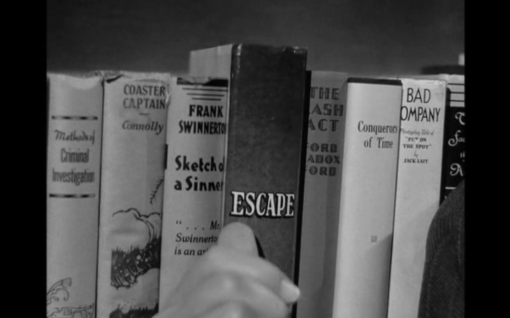 Otto Kruger does see what Cummings is doing and says, ”I didn’t know you  were a bookworm”, and points out another book on the shelf – “The Death of a Nobody!” 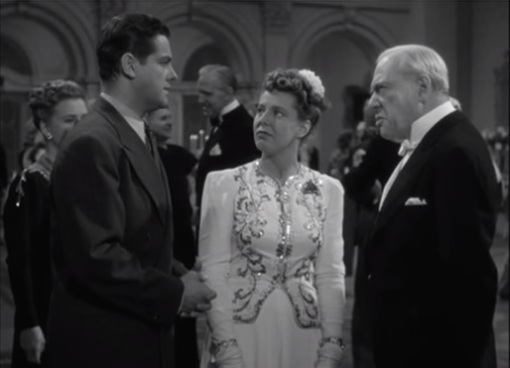 I can imagine an audience today laughing at this scene .

At Alma Kruger’s New York mansion where a party is going on, Robert Cummings is desperate to escape and goes  up to one of the guests and says , “This whole house is a hot bed of spies and saboteurs”.
The  chap looks at him and thinks he is drunk.
Cummings  tries  again, this time  saying, “We’re in the middle of the biggest bunch of fifth columnists in the country,”

This time he gets the answer, “What’s the gag?!”

Maybe it was Cummings’ deadpan delivery or maybe it would have sounded better if Cary Grant or Joseph Cotten  had said these lines. 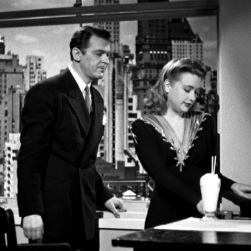 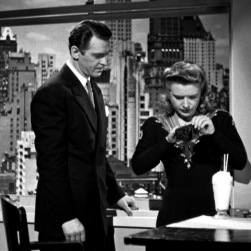 But the above scene defies explanation. Priscilla is being held prisoner. Her guard comes into the room she is in and gives her a milkshake. She says, “How much?” and the guard says, “15 cents.”

She goes into her handbag, asking him, “Got  change?” 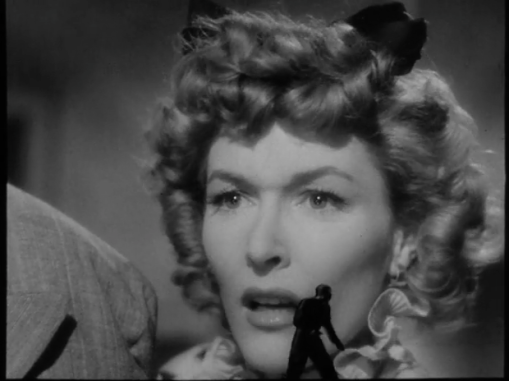 Another good scene, where Norman Lloyd tries to evade the police by going into Radio City Music Hall which is screening  a film involving  a shooting – he then starts shooting it out with the cops and runs in front of the huge screen.

(Hitchcock filmed the fictional scene to coincide with the action. (Veda Ann Borg( correction ,this is Margaret Hayes) was one of the actors). 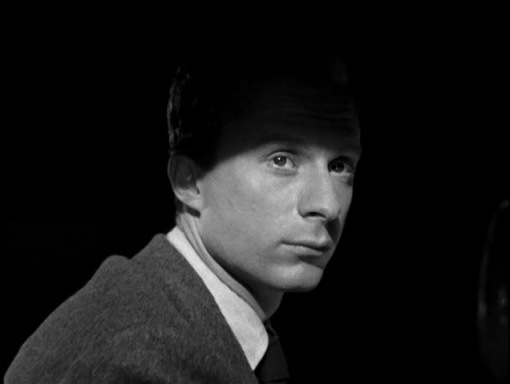 A pity Norman Lloyd only appears at the beginning and the memorable end of the film. He’s the cold blooded killer who meets his end atop the Statue  of Liberty. 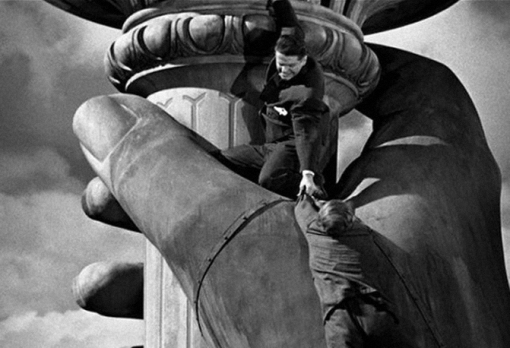 As he did with Mount Rushmore in North By Northwest, Hitchcock in 1942 was already using historic buildings, in this case the Statue of Liberty which was recreated for the finale of the film – the statue’s arm and torch were built to scale. 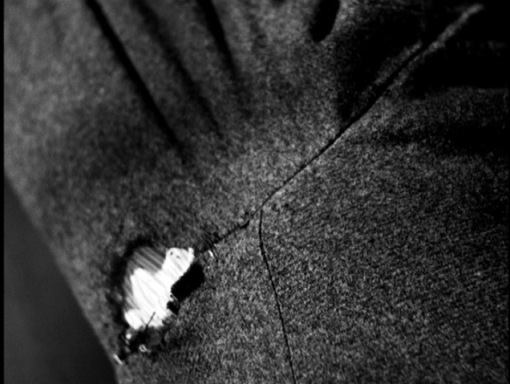 The stitches start to give way on Norman Lloyd’s jacket sleeve . This is Hitchcock at his best.

But the ending of Saboteur is too rushed, with little in the way of satisfactory explanations. Reminds me of The Big Sleep, maybe the writers lost the plot!

Hitchcock to Truffaut in 1983:

”I feel the whole thing should have been pruned and tightly edited long before the actual shooting.”

Up next for Hitchcock was SHADOW OF A DOUBT. Enough said! 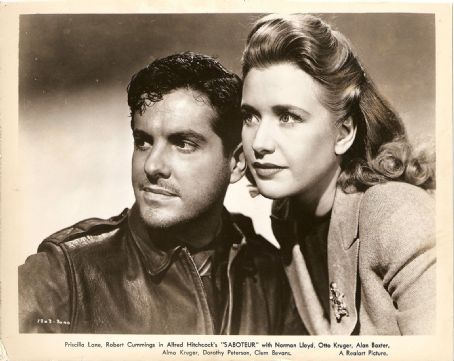 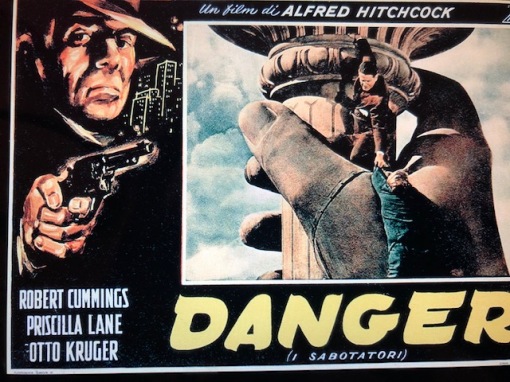 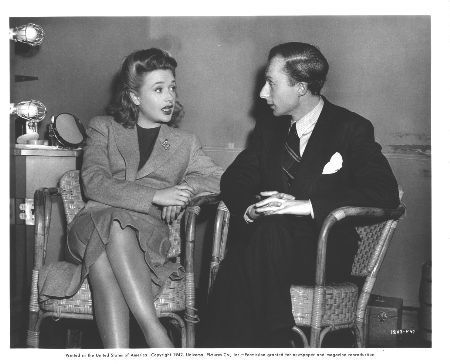 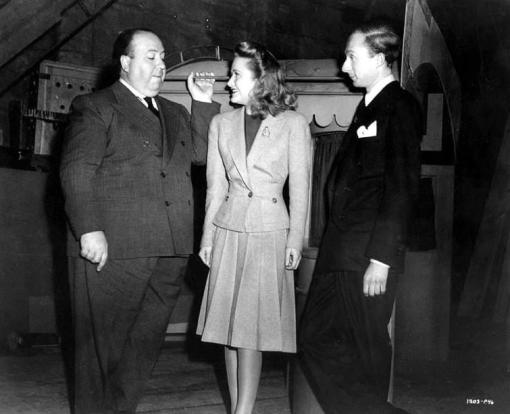 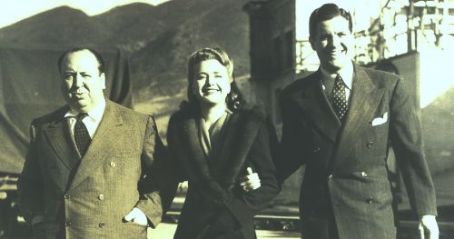 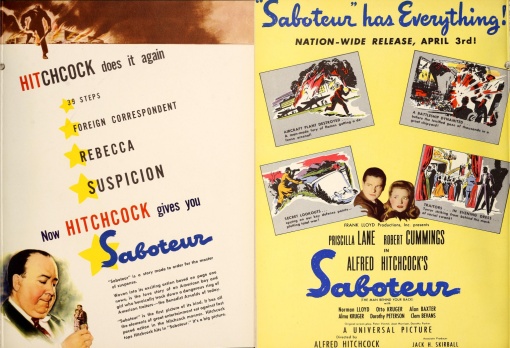 Just below the title, in brackets, is “The Man Behind Your Back.”

Side note: I’m a big fan of Madeleine Carroll and wonder if Hitchcock ever tried to cast her again. She was however under contract to Fox and went back to England during the war, so maybe it just wasn’t possible.

Hitchcock did call her his favourite blonde! 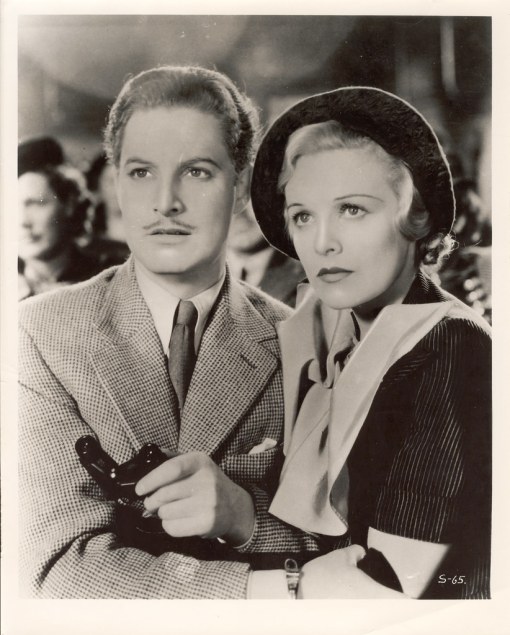