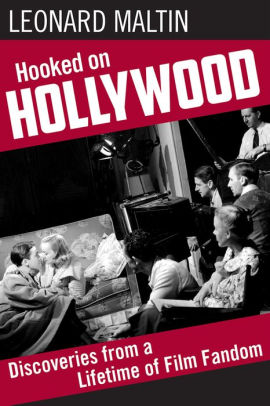 Leonard Maltin’s 2018 book, Hooked in Hollywood, Discoveries from a Lifetime of Film Fandom is, as you might expect, a great read.

I first became aware of Leonard Maltin through his magazine, Film Fan Monthly.  In an era before the internet, this magazine was a haven for vintage Hollywood fans – written by informed and enthusiastic people .

Amazingly, Leonard Maltin , from New Jersey,  took over the magazine from Canadian fan, Daryl Davy when Leonard was only 15 years old in 1966! And kept it going till 1975.
This unique little magazine had 168 issues, with Leonard running it from Issue 59.

Hooked On Hollywood, at nearly 400 pages, is mainly made up of many interviews that Mr. Maltin did over the years , and here are some examples.
(The last chapter of the book is called RKO Revisited and the author looks at around 60 RKO titles from the 1930s, “some obscure, some ignored and some merely worthy of another look.”)

………Arthur Gardner , a partner in the Levy-Gardner-Laven production company, was 96 when the author spoke to him:

“We got a call from Edward Small. He wanted to meet us. He had a commitment from Edward G. Robinson to make a movie for $50,000. He normally got $250,000, but he had been let go from Warner Brothers and was suspected of being a Communist, so he agreed to do this picture called VICE SQUAD.

Then there was a part for a woman; she was all through the picture but we figured out that we could shoot all her scenes in three days, so we hired Paulette Goddard.

Eddie was great to work with- UA opened the picture in New Jersey and we were a hit!” 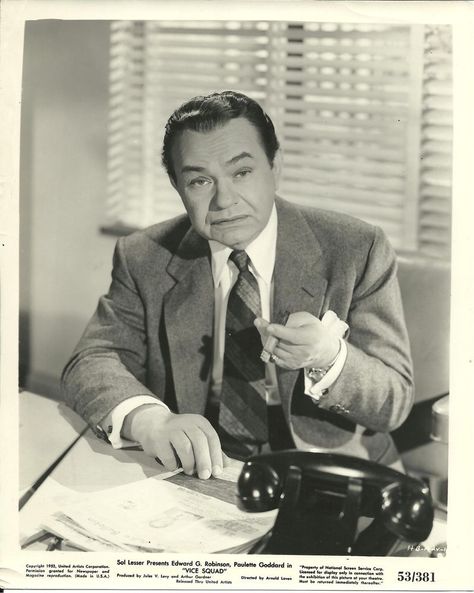 “I never had any trouble with her (Claudette Colbert) – she was divine.”

The author mentioned the director playing himself several times in films:

“It was a gag – I could deduct my wardrobe costs. Until Hitchcock started to do it, I always appeared somewhere in a picture, just walk through a scene.”

(Mitchell Leisen’s films include MIDNIGHT, HOLD BACK THE DAWN, EASY LIVING, ARISE MY LOVE, LADY IN THE DARK.)

When asked whether the remake of MIDNIGHT (Masquerade in Mexico)  went off as well as the original,  the director commented :

“No, you had Barrymore, Ameche, Claudette Colbert, as against Dorothy Lamour, Arturo de Cordova  –  please!”

“It was marvellous working with Katharine Hepburn (on The Desk Set). I loved her, loved working with the two of them (Hepburn and Spencer Tracy). They were great together, not only professional, but there was such a wonderful relationship.
He was marvellous with her, and she with him. It was a terrific experience to be with them – and no effort at all.” 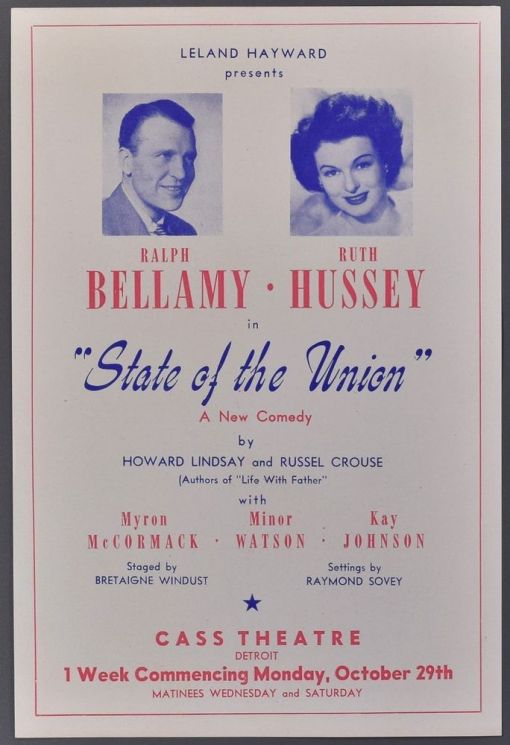 The author asked Ralph Bellamy why he had left Hollywood in the mid 1940s:

“I went to New York to do the play that won the Pulitzer Prize, STATE OF THE UNION.

I was in Mark Hellinger’s office and saw this script: ‘A  charming but naive fellow from the west, a typical Ralph Bellamy part.’  That’s when I made up my mind to go east.” 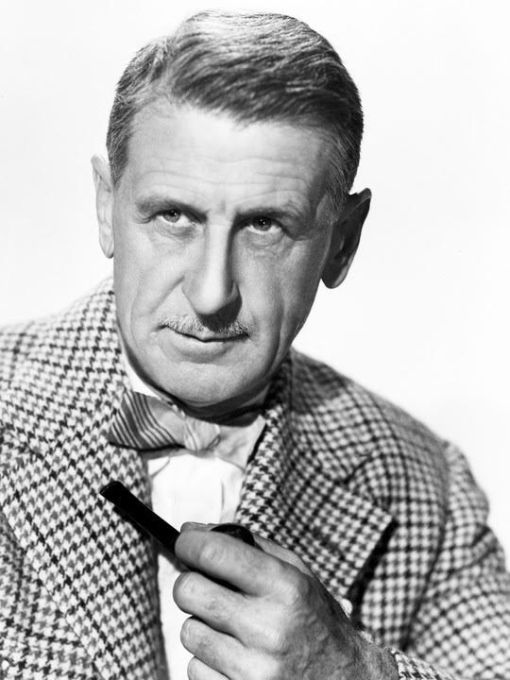 “Carole Lombard was just a joy. Wonderful, wonderful gal.
I think she was interested in other things in life than just being an actress.”

Irene Dunne was another one of those naturals, a great talent.

I think that the fine artists, particularly in acting, are a result of what they amount to as a person, in their philosophy and everything else.”

I think Gary Cooper’s scene at the end of the picture about the baseball player (The Pride of the Yankees) was just as fine as any actor that I know of could have done it.”

(It’s amazing to think that a twenty something  Leonard Maltin was interviewing John  Cromwell in the early 1970s when the director was in his 80s.
in all his interviews, Leonard Maltin’s questions always display his depth of knowledge of the subject.

John Cromwell’s films include The Prisoner of Zenda, In Name Only, Since You  Went Away, Dead Reckoning, The Racket.)

There is a whole chapter devoted to the film version of the Broadway hit, ON YOUR TOES (1939). Of particular interest to me because I saw a wonderful stage production and looked forward to seeing the film which, as the author indicates, was pretty awful.

Using  the Warner Bros. archives at UCLA, the author says that the memoranda, letters, notes etc “form a diary of disaster.”

The chapter begins: “How could a 1936 Broadway musical hit become a 1939 movie flop? Why would a studio pay top dollar for the rights to a show with a score by Rodgers  and Hart and then  jettison all the songs?

How did an actor with no terpichorean skills windup with the starring role in a story about a dancer?

The author never did find out why the terrific Rodgers and Hart songs weren’t used. Warners had paid $60,000 for the film rights including the show’s  8 songs.
The show had starred Ray Bolger and staff producer Robert Lord wrote to Hal Wallis saying, “We need Bolger or someone like him for the picture; and if we don’t get Bolger, I think it’s going to be quite a job to get someone like him.”

MGM, to whom Ray Bolger was under contract, was offered the rights, but turned it down.

Having recently signed Eddie Albert, Jack Warner became enthusiastic about casting him in the Bolger role. Warner dismissed Bolger as “definitely meaning nothing.”

The famed Broadway choreographer, George Balanchine who had worked on the stage production, gave his opinion of Eddie Albert:

“Eddie Albert cannot dance at all and that it would take years before Mr. Albert knew enough about dancing even to fake the part in On Your  Toes!”

My favourite comment about Eddie Albert comes from producer Robert Lord: ”It is not easy to make a picture about a dancer played by an actor who can’t dance at all!”

But Eddie Albert got the role and you  only have to watch the wonderful dancer, Vera Zorina in the “Slaughter on Tenth Avenue” ballet to realise how ridiculous Eddie Albert looks in the scene and how short changed the audience is.

(The plot of On Your Toes is slight – about a vaudeville dancer who gets involved with a Russian ballet troupe. It’s a musical comedy so the songs matter – lovely ones like the title song, There’s a Small Hotel, Glad To Be Unhappy, Quiet Night . But no one sings in the film!

By the way, also in 1939, MGM filmed the Rodgers & Hart show, Babes in Arms and chose not to use  songs like My Funny Valentine, The Lady is a Tramp, Johnny One-Note and I Wish I Were in Love Again. 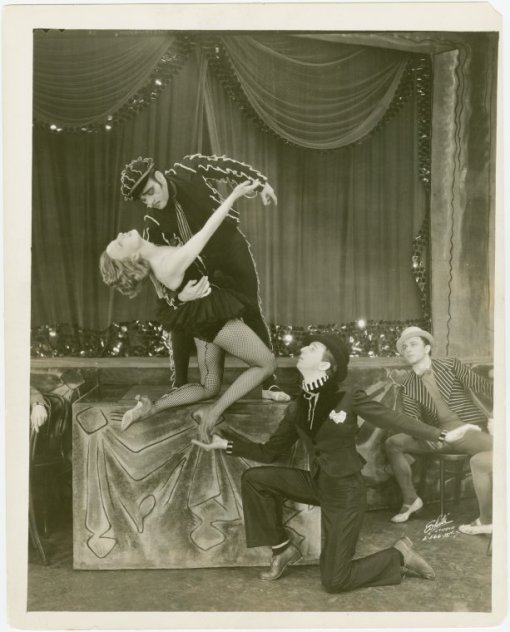 This Leonard Maltin book  is a must read for vintage Hollywood fans.