The death of singer India Adams has been reported. She was 93.

Known for being the voice of Cyd Charisse in The Band Wagon and Joan Crawford in Torch Song, India’s deep, rich tones add so much to songs like “Tenderly” in Torch Song and “A New Sun in the Sky” in Band Wagon.

India was performing in nightclubs well into her 80s and joined up with two other famous dubbers, Annette Warren and Betty Wand  to perform round the country as “Hollywood’s Secret Singing Stars”.
India ‘s singing in these films did not lead to a film career but she did appear on stage in Can Can and Brigadoon.

During her relocation to London during the 1960s, India was Ginger Rogers’  standby in MAME AT Drury Lane.

Back in America, India continued singing in nightclubs and on cruise ships.

In a 1995 interview, India spoke of revealing at one concert that she had sung for Cyd Charisse. Cyd was in the audience but did not come backstage to see India.

India was full of praise for Joan Crawford who sent her a thank you note and said, “I hope that I can do as good an acting job as you did a singing job.”

It was quite a coincidence that India had sung Two Faced  Woman for Cyd Charisse in The Band Wagon, but the number wasn’t used until Torch Song . 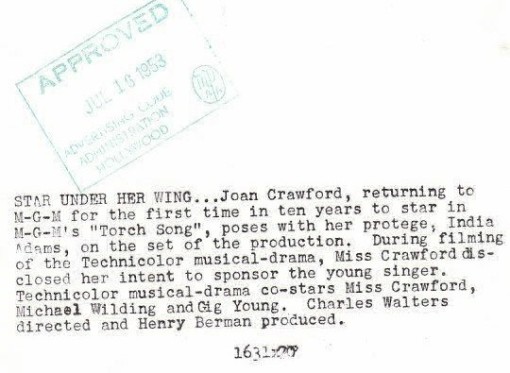 Note the term ‘Protege’ on the back of this publicity photo. As India said, “They swore you to secrecy.”

Betty Wand sang for Leslie Caron in GIGI, and Natalie Wood in WEST SIDE STORY.

Annette Warren sang for Ava Gardner in SHOW BOAT and in several films for Lucille Ball.