Cry of the WereWolf (1944) has its moments but none of them include a werewolf as portrayed in the above poster.

The film opens with the matter-of- fact tones of museum guide John Abbott showing a group round a museum of horror and vampirism. He shows them the Voodoo room and reveals  that the building was once the home of ‘Marie LaTour’ who was a werewolf and is thought to be buried somewhere in the grounds.

The guide demonstrates how you kill a vampire . Of course you know it’s a stake through the heart.

The museum is run by Dr. Morris (Fritz Leiber) who is involved in psychic research, aided by his assistant Elsa  (Osa Massen) who is in love with the doctor’s son Bob (Stephen Crane).
Dr. Morris indicates he knows where the mysterious Marie LaTour is buried. 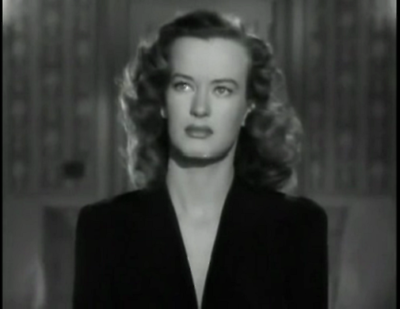 Also working at the museum is creepy caretaker Jan (Ivan Triesault). Jan goes to the gypsy encampment where he reports to Princess Celeste (Nina Foch) and Bianca (Blanche Yurka).

Celeste is the daughter of Marie LaTour , and is also a werewolf. Bianca reminds her she must  fulfil her destiny , joining the next museum tour and murdering Dr. Morris in her werewolf alter-ego.
No blood or gore, just screams and animal howls from inside a hidden room. Unfortunately the tour guide sees the hidden room opening and goes in. When he comes out, he’s lost his mind!

The police, led by Barton MacLane, are called in and find the doctor’s body showing he has been attacked  by an animal.

When we finally see the ‘werewolf’, it looks like a moderate sized Alsatian dog and not at all threatening!

it might have been more convincing if we had only seen the shadow.

One gripping scene with a Val Lewton touch takes place in a mortuary with  Stephen  Crane being stalked by Nina Foch. Of course, it is dark and we only see and hear Nina’s clicking footsteps which gradually morph  into the wolf’s paws padding along the floor!

When the cops finally corner the werewolf and pull out their guns, Barton MacLane says, “Aim at its eyes!”

They fatally wound the animal and another good scene shows blood dripping down the Princess’s arm and the screen changes her  into the wolf’s legs which also have blood on them.

(Another good character actor, Milton Parsons, plays an undertaker whom the gypsies ( did I say they were from Transylvania?) bring their dead for special ceremonies. 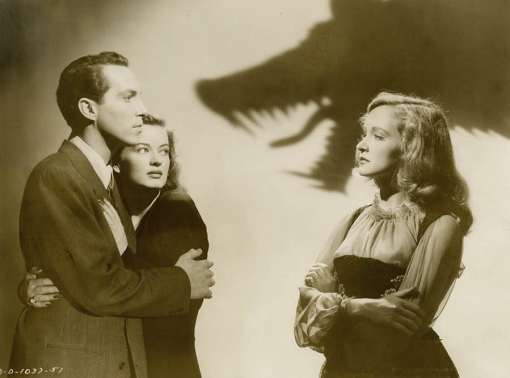 Nina Foch, and the dangerous werewolf.

Nina Foch  is the nominal lead but is not seen for the first 20 mins. of the 63 minute running time. Under contract to Columbia early in her career, Nina never got the roles to show what a fine  actress she was.
Stephen Crane (one of Lana Turner’s husbands) only made three films before becoming a successful restauranteur. He didn’t stand out amidst all the good character actors in this movie.

Whenever I see Osa Massen, I always think of her as the whining wife of Melvyn Douglas in A WOMAN’S FACE. She’s ok here, even as she is hypnotised by the Princess Celeste who tells her, “when you awaken, you  too will be the daughter of a werewolf!”

One is used to seeing Ivan Triesault  as an autocratic spy or Nazi  ( think  “Notorious”) A powerful presence in most of his films, but this film was early in his career and he didn’t have much to do as the caretaker .

Hollywood, always rich in character actors, had Fritz Lieber as the museum director. Although only in a few scenes, he was impressive and believable.
Barton MacLane is his usual gruff self as the sceptical policeman who, at the end, turns to uncredited Ray Teal and says, “ You can say I saw it with my own eyes.”

I’m always surprised how much story can be told in just over an hour and although I may be making some fun of the film, aside from the unrealistic wolf, I enjoyed it a lot, especially because of the good cast. If only director Henry Levin ( his first film as director) had left the werewolf to shadows and sounds.

I watched it on You Tube. 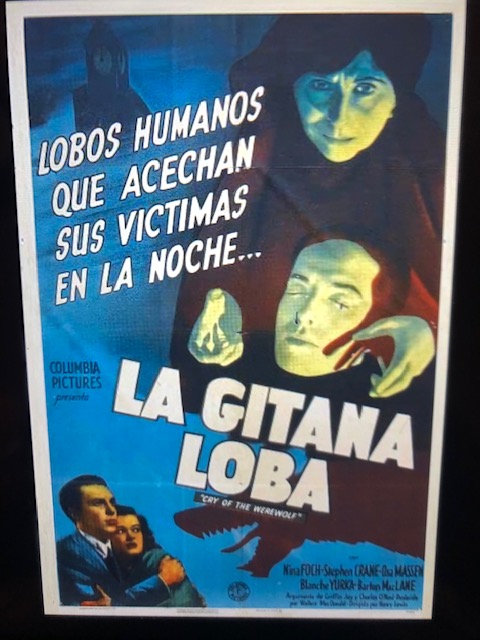 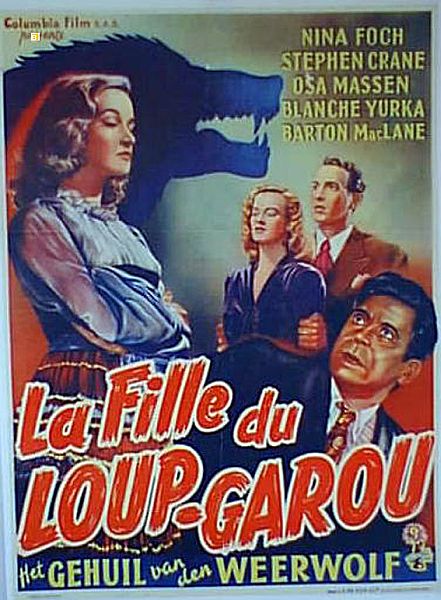