The bulk of the book covers Cuddles’s life  in Europe , but there are some good stories about his life in Hollywood.

His real name was Gero Jeno and he was also known as Szoke  Szakall. His wife called him Yani.

Born in Budapest, he was a stage actor/ writer/ producer in Austria and Germany , and he made many films in Hungary. He married in 1920. Sadly, during the war, his three sisters died in concentration camps.

Universal producer Joe Pasternak was a relative by marriage and he offered Cuddles a role in Deanna  Durbin’s “It’s a Date ” in 1940 and so he and his wife moved to Hollywood.  He played a playwright visiting from Vienna.

That same year he was in another Deanna Durbin film, “Spring Parade” .  And shortly after he joined Warner Brothers and remained there for the rest of his career.

With Deanna Durbin in SPRING PARADE.

I love the comic scene with Humphrey Bogart in Thank Your Lucky Stars.

Cuddles comments on this film:

“The picture “Thank Your Lucky Stars” is one of my unforgettable experiences. It was in this film that I became acquainted with David Butler, one of the kindest men in the world, who is also an outstanding director.
We have made ten pictures together……Butler was very fond of me…..he crowded my roles with jokes and gags.

But the most fascinating person was the producer himself, the late Mark Hellinger of blessed memory……Everybody without exception loved him. “

Probably his most famous role, ‘Carl’ in CASABLANCA. The waiter who admires how his boss ‘Rick’ helps the young couple at the gambling tables. 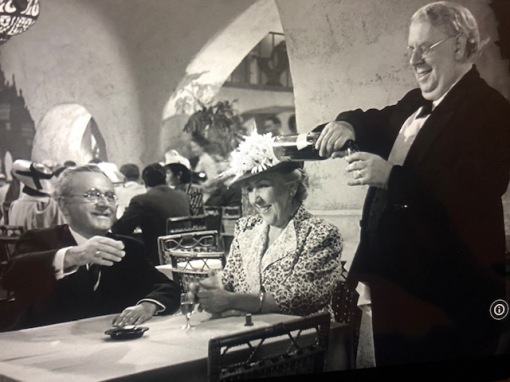 That lovely scene where Cuddles drinks with the couple who are leaving for America – Ilka Gruning, Ludwig Stossel.

Cuddles describes , in comedy terms how an actor gets a role:

“From its birth to completion, each picture goes through so many phases…….it all begins with the actor walking harmlessly ,without suspicion, on the studio lot.
A writer meets him and tells him that he is writing a wonderful part for him…..he even relates one or two scenes.

When the writer has finished describing the story, he places his index finger on his lips and looks at the actor with a serious, pleading expression. This means that the actor mustn’t say a word to anybody about the whole business…..WHY it’s supposed to be a secret, the writer doesn’t know, not does the executive who has told him to keep his mouth shut.

A few weeks later the actor is told by the producer that he is in the film, but this isn’t ‘official’ yet.

The next  mystery is the question  is when the shooting script will be finished and when actual production can start …….If I didn’t  know that these people were engaged in making pictures, I would think they were manufacturing counterfeit five-dollar bills….” 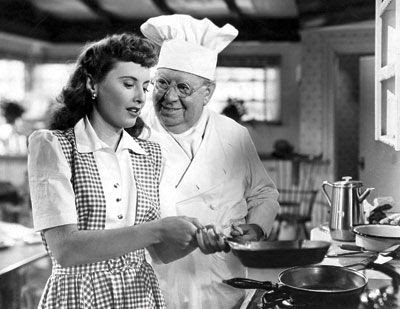 With Barbara Stanwyck in Christmas in Connecticut (1945).

Cuddles in the middle. Ball of Fire .

Cuddles:  “After the shooting of “The Time, The Place and the Girl”, I received a great honour. My boss bestowed on me the nickname of “Cuddles”. I was very happy, though people poked a lot of fun at me.

(Did he mean Jack Warner?)

Mrs.Boszi Sakall often wrote home to her relatives , and one of her letters in 1941 is quoted:

PS – Yesterday we went to a cinema where you could drive in with your  car. Yani liked it very much. In Europe he drove only once into a cinema with his car, and they took away his driver’s licence.”

(Mrs. Sakall displays quite a sense of humour !)

Cuddles! “When  I made the picture “Sugarfoot”, I fell down a flight of stairs. It was a painful experience. I hurt myself badly. Later, when I saw the picture, I realised that I had deserved the punishment  – in advance!”

His last film was THE STUDENT PRINCE in 1954. 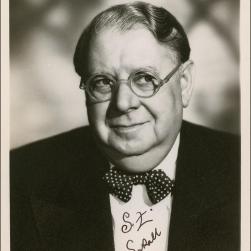 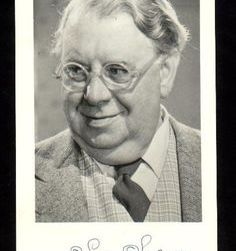 Link to the book: