In no particular order, some thoughts – and lots of pictures from one of my favourite westerns, JOHNNY GUITAR which I view every so often. So excuse me while I rave on. 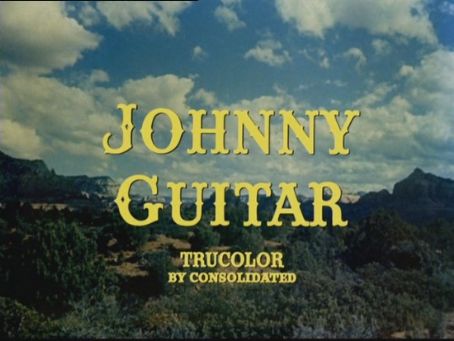 What am I missing!

For me, it’s simply a favourite western of the 1950s ( which is my favourite decade for the genre). It’s beautifully filmed and directed by Nicholas Ray, with a strong  plot, great cast and a fabulous set.

And it isn’t the only western with strong female characters leading the plot ( though there weren’t many.)

Maybe an unusual choice for Joan Crawford,but she fits the character of Vienna as far as I am concerned – strong, single minded and willing to fight for what she wants.

If all the stories are to be believed, it was not a happy set, but for picturegoers, it’s a colourful,exciting western with plenty of action , though many of the leading characters bite the dust! – Tom, Turkey, Corey, The Kid and Emma. 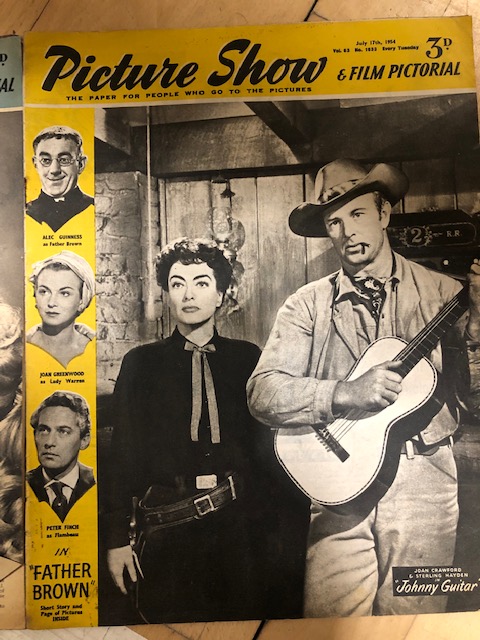 ………..My copy of Picture Show magazine from July 1954. I always liked how Picture Show would have a page featuring the story of the film in pictures. 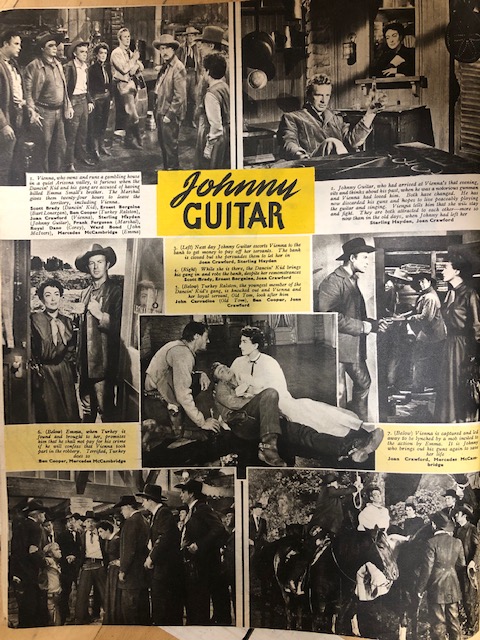 ……..It’s always interesting to see reviews when the film was released.

Joan Crawford’s first western ,”Montana Moon”(1930)  was referenced in one article about the film. And why not reveal the ending – “……the two women tangle in a unique gun battle, with Miss McCambridge the loser.”

Another article in ‘Harrison’s Reports’ of May,1954 also felt it was ok to give away the finale – “Miss McCambridge, after failing to have Miss Crawford lynched, loses her life in a gun duel with her.”

And another reviewer said, “It is overburdened with a number of talky passages.”

In contrast, a more positive comment  – “Crawford shines in a sock role. McCambridge as venomous as they come. Peggy Lee song a potent selling point.”

Still, despite mixed reviews, JOHNNY GUITAR did well at the box office.

……….Interesting notice about a song  title change. Patti Page had released a record called “Johnny Guitar” in February 1954 and the record company was threatened with litigation by Republic – their film was due to debut the following  month.

The song title was changed, but not the lyrics which contain frequent references to ‘Johnny Guitar’ – “Johnny Guitar, my restless lover ; Why is my Johnny Guitar a rolling stone….”

“Crawford should leave saddles and Levi’s to someone else and stick to city lights for a background. “Guitar” is only a fair piece of entertainment, seemingly headed for spotty returns,even with exploitations……it will be a major disappointment to loyal Crawford  fans.

Scripter Yordan and director Nicholas Ray become so involved with character nuances and neuroses all wrapped up in dialog, that Johnny Guitar never has enough chance to rear up in the saddle and ride at an acceptable outdoor pace.”

The start of the film, Johnny Guitar (Sterling Hayden ) heading for Vienna’s  saloon . He’s been hired to play the guitar – and maybe use the gun in his saddle bag.

Vienna (Joan Crawford) seems to have sent for Johnny, though it’s not clear why she would, considering they haven’t seen each other for five years.  At one point she says to him, “I hired you for protection.”Though  she doesn’t look surprised when she first sees him in the saloon with a guitar slung over his shoulder. Has she been keeping tabs on him? 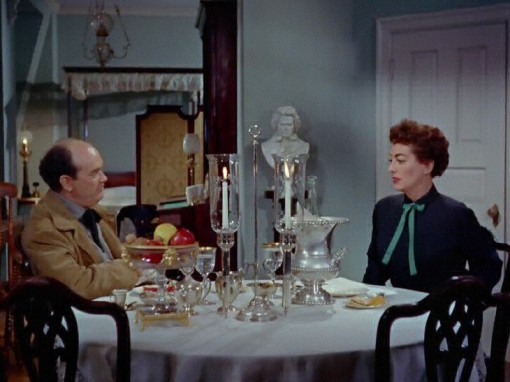 Vienna’ s private quarters are as different from the saloon downstairs as she can make it. In this scene with Mr. Andrews (Rhys Williams )there is a bust of Beethoven in the middle of the shot!

( The German born Beethoven stayed in Vienna for over 30 years.)

We never learn what Vienna’s real name is , (assuming it isn’t Vienna.)

One of the best lines in the film , after the train company executive, Mr. Andrews  asked Vienna how she knew the train route was coming through the land she owns:

“I ran into your surveyor and we – exchanged – confidences.” 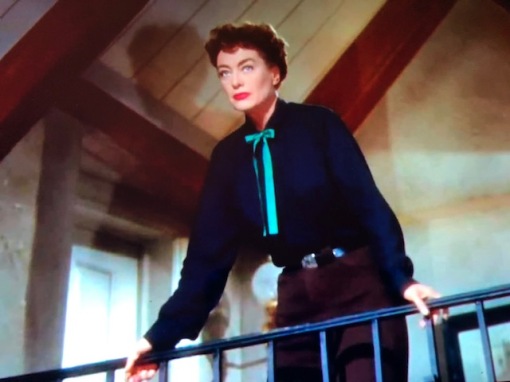 Vienna to the mob:

“Who are you? And you, and you, to break into my house, with your angry faces and evil minds.”

(McIvers (Ward Bond) and Emma Small (Mercedes McCambridge , both big ranchers  who more  or less run the nearby town. Emma hates Vienna – with a vengeance!  There’s obviously quite a backstory between the two women, but my impression is that Vienna doesn’t spend much time thinking about Emma.  It’s all on Emma’s side. She obviously resents another woman challenging her power in the community – and that Vienna attracts men as easily as Emma doesn’t!

……..Republic’s Tru Color isn’t Technicolor but I think it looks great. The costumes and contrasting colours add so much to the look of the film. ( And the recent U.K. blu-Ray release from Eureka is just a beautiful digital restoration , making it look as if it was just made, with even better technology than 1954 when it was released).

This is one western I would never want to see in black and white. And one I would love to see on the big screen.

……The Dancin’ Kid (Scott Brady) senses Vienna and Johnny have a history. Later he says to Vienna, ”What’s wrong with me. tell me. What don’t you like?”

I love this scene where we learn Johnny has left Vienna five years earlier. He asks her to pretend that things are as they were before.  He says: “Lie to me. …tell me that all these years you’ve waited….”

She repeats what he says , with no feeling until the very end of the scene when she admits she has  waited for him. 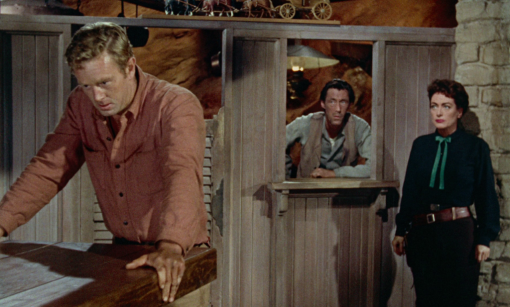 We know what Vienna’s been doing the last 5 years,but we never hear how Johnny has spent these years and what made him substitute a guitar for a gun.

John Carradine as Tom who works for Vienna.

Is this not one of the best sets in any western – a saloon with a back wall built against the red rock face of the cliffs.

I have no problem with the first half hour of the film being set in the cavernous saloon.

The long white dress is a dramatic change of costume for Vienna , but when would she ever wear it?
She plays the haunting title song.

Emma’s brother has been killed in a stagecoach  robbery and she blames the Dancin’ Kid– and Vienna – with no evidence. She just wants them dead.

The posse don’t even wait to change their funeral clothes ( after the bank is robbed by the ‘Dancin’ Kid’), before going after him.

At the bank robbery in town, Vienna just happens to be closing her account when the Dancin’ Kid and his men arrive.

Johnny is with her and makes it clear he won’t be interfering, saying , ”I’m a stranger here myself.”

( There’s a great song called ‘I’m a stranger here myself’ , written by Kurt Weill and Ogden Nash and sung by Mary Martin in the 1943 musical, “One Touch of  Venus”.)

No trial, it’s mob justice.Emma offered the men $100 to whip the horse from under Vienna but is told, “You’ll have to do it yourself, Emma.”

And she would have done it if Johnny hadn’t rescued Vienna. 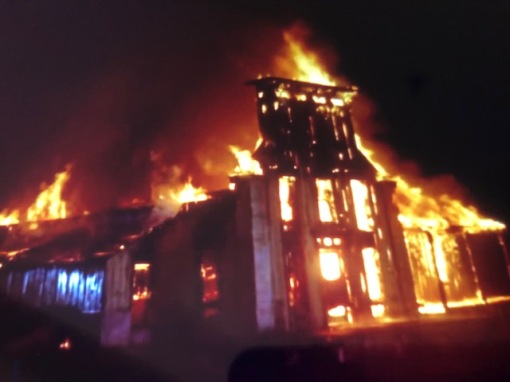 Not quite the burning  of Atlanta, but still quite a dramatic scene when the saloon is in flames. Emma takes maniacal delight in destroying Vienna’ saloon.

Mercedes McCambridge stands  out in all her scenes.

Vienna and Johnny escape from the posse through the waterfall that leads to the Dancin’ Kid’s hideout.

Not a real waterfall, but who cares.

On the set during the waterfall scene.

The Dancin’ Kid’s hideout. Joan visible at the top.

And the final shoutout between Vienna and Emma.

Of course, Joan Crawford is still with us at the end of the film. 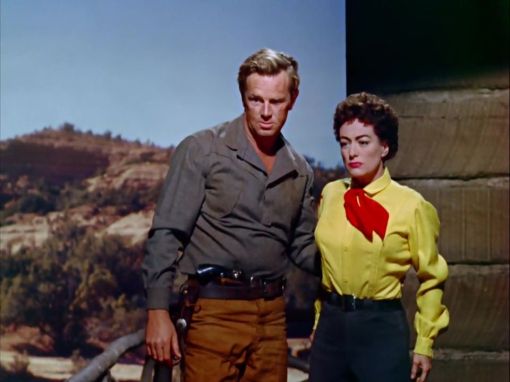 The frontage for the saloon, against the Arizona rocks. Republic Pictures , with  Joan Crawford as their star, spent more than they usually would on a western.

A Johnny Guitar street in Sedona. Arizona. ( many streets in Sedona were named after movies filmed there.) 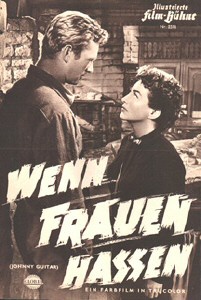 With director Nicholas Ray’s help, Joan prepares for that scene where she faces the posse assembled below.

One poster with Johnny Guitar himself on the cover and a devilish looking Ernest Borgnine in the background. No sign of Vienna. It’s called “Johnny Guitar” but of course it is Vienna’s  story.

Sterling Hayden’s name before Joan’s! ( Unusual to see the male actors listed on one side, and Joan and Mercedes on the other.)

Some good black and white stills which I found on the site forumwesternmovies.fr 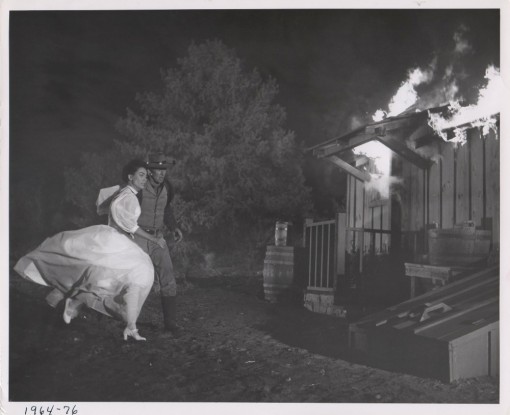 Only at the end of the film do we hear Peggy Lee sing the title song she wrote with prolific composer Victor Young. I simply love this haunting song. Relatively simple lyrics, but that beautiful arrangement by Young. 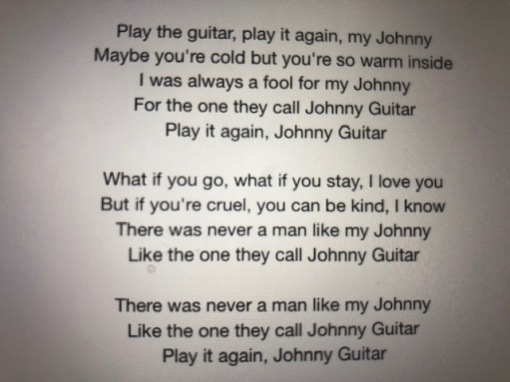 P.S. I just played it again.