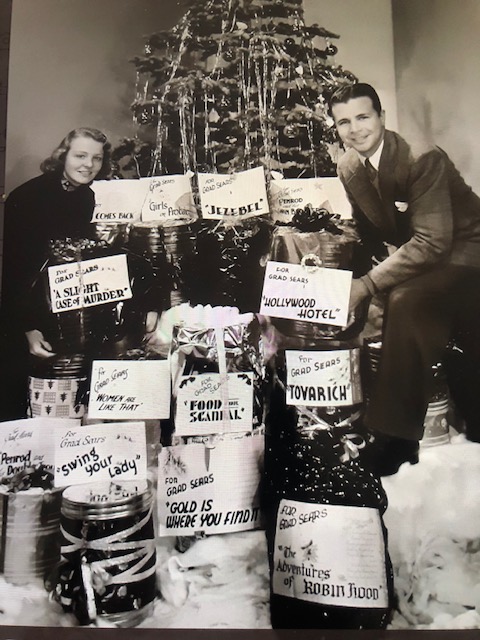 So, lots to look forward to……”Fool for Scandal”, “Adventures of Robin Hood”, “Jezebel”.

Jane Bryan, at age 20, was doing well at Warners, but within  two years she retired from acting after marrying.
The quizzical name on the Xmas tree is Grad Sears.

Why are all the films parcelled up and marked ready for Mr. Sears?

Turns out Gradwell L.Sears was the General Sales Manager for Warner Brothers, so I guess this advert perhaps appeared in a trade magazine, indicating the films Mr. Sears would be selling round the country.

I haven’t seen HOLLYWOOD HOTEL but I love a quote from it. Dick Powell is an aspiring actor who joins the fictional studio, ”Miracle Pictures” – whose motto is:

(There was a ‘Hollywood Hotel’ built in  1903 on Prospect Boulevard – which later became Hollywood Boulevard). It became a popular locale for the stars.) 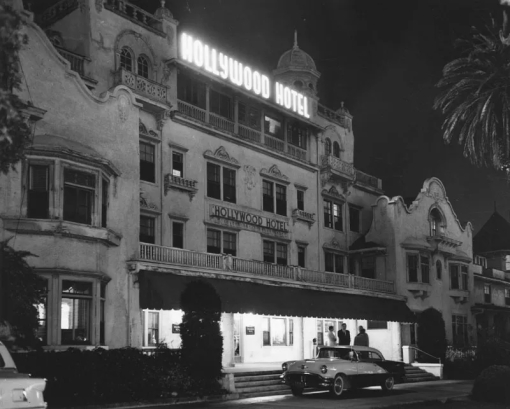 It was interesting to read that big stars who appeared on Louella’s show were paid in soup! Yes, I said soup.
Louella’s show was so popular, studios and stars got plenty of publicity. The show had millions of listeners, coast to coast.

Stars received a case of the sponsor’s soup – the Campbell Soup Company!

By 1938 the Screen Actors Guild insisted that the stars would no longer accept soup in payment. Campbell’s Soup said no to the usual $1000  paid for a radio appearance. The Louella show left the air.

A clip of Benny Goodman orchestra from HOLLYWOOD HOTEL.

Health and happiness to everyone in the new year.